The Big 12 title isn’t the only thing hanging in the balance when the Oklahoma Sooners face the Baylor Bears in the conference championship game this Saturday.

The Sooners still have a shot at squeaking into the College Football Playoff picture if they can roll the Bears and get some help in the other Power 5 conference title games on Saturday. Does that added incentive make OU a must-bet side with books making Oklahoma a 9-point favorite in this neutral-site scrum at AT&T Stadium in Arlington, Texas?

We don’t just give you the best bets on the spread and total for the Big 12 Championship Game - we look at quick-hitting bets, first-half wagers, and prop picks so you can enjoy watching and wagering this 12 p.m. ET kickoff.

The Sooners are not a counter-punching team. They come out of the corner swinging, which is why they rank fourth in the country in first-quarter points per game with an average of 11.5 in the opening 15 minutes of action.

Oklahoma has struck first on the scoreboard in all but one game this season – versus Kansas in Week 6 – and has hung double digits in the first quarter in eight of its 12 contests. One of those slow starts was a 14-3 first-quarter hole versus Baylor in Week 12 – a game in which OU battled back from a 28-3 deficit to eventually win 34-31.

The Sooners won’t risk falling behind again to the Bears this Saturday. You can get Oklahoma to score first at -163 but if you’re looking for a plus-money option out of the gate, go with OU touchdown as the first score of the game at +120.

When you think Big 12, you instantly picture high-octane offenses and lots and lots of passing touchdowns. But, if you follow the path of Baylor and Oklahoma to this championship game, both programs have leaned heavily on their defenses.

The Bears are the top scoring defense in the Big 12, giving up only 18.4 points per game. And, only 4.3 of those tallies came in the first 30 minutes of action. Baylor checked Oklahoma to a mere 10 first-half points in their Week 12 matchup and BU has held its last five foes to 10 points or less in the first half, including two shutout efforts.

The Sooners will look to attack the Bears biggest weakness on defense early and often, which is defending the run. Baylor allows 153 yards rushing to conference opponents per game and Oklahoma boasts the ninth-best ground game in the country at 260 yards on the ground per outing.

The Sooners will look at a run-heavy start to the game as an investment, pounding away and wearing down this BU stop unit over the course of four quarters (and less chance to turning it over early again). That approach should also keep scoring down in the first half.

PREDICTION: First half Under 33.5 points

Baylor QB Charlie Brewer has watched his passing numbers dwindle as his rushing numbers climb in the final four games of the Big 12 schedule.

The junior QB passed for an average of 198 yards in that span, cracking the 200-yard mark only once while completing 74 of his 120 total pass attempts (62 percent). He did, however, rush for 181 yards from Weeks 11 to 13 before finishing with minus-11 yards on the ground in the Week 14 blowout over Kansas.

Brewer had a rough second half versus Oklahoma, and finished the game taking three sacks and throwing one interception. He’s been turnover prone in those final four games, with three interceptions after throwing just three picks (all coming vs. Texas Tech in Week 7) in the first eight outings of the season.

With a focus on the running game in recent efforts, BU will look to Brewer as more of a game manger in the Big 12 Championship and that should keep his numbers down.

The total for the Big 12 Championship opened at 61 and has jumped a full field goal and more to 64.5. These teams stayed Under the 68.5-point total back in Week 12, with Baylor exploding out of the gates with 31 first-half points before getting shutout in the last two quarters and allowing 24 second-half points to OU.

If Oklahoma can avoid the early turnovers that plagued it in the last meeting with BU, bettors should expect a good number of handoffs from one of the best rushing attacks in the country. That should help keep the clock ticking and chunk-yardage passing plays to a minimum.

The Sooners’ recent offensive efforts have been tempered, averaging 32 points in their last three games – a 10-point decrease from their season average. Oklahoma, which tops the country in average yards per play (8) has turned down the dial to only 5.2 yards per offensive snap in that three-game span.

Baylor knows it can’t afford for this game to turn into a track meet on the fast turf inside AT&T Stadium and will be playing defense even when it has the football. The Bears run game was OK for most of the year but has found a new gear since the loss to OU. Baylor has totaled 427 yards on the ground in wins over Texas and Kansas and ate up a combined 63:48 of time of possession over those two victories.

With both teams looking to win the rushing war Saturday, there’s value with the Under – even more so with the Over/Under climbing more than a field goal since opening.

The Sooners haven’t looked great over the last five games (1-4 ATS). Oklahoma started showing weak spots with the loss to Kansas State in Week 9, giving up 24 second-half points, and barely got out of Ames alive after allowing 20 points to Iowa State in the fourth quarter in Week 11.

Then came the Week 12 comeback versus Baylor, and a 28-24 squeaker over TCU as 19-point home favorites in Week 13. Even OU’s win over an undermanned Oklahoma State squad last weekend seem uninspired for a team trying to score style points with the CFP selection committee.

Baylor enters this game also with only one loss on the season – that collapse versus Oklahoma – and feels a little disrespected with its current No. 7 spot in the CFP rankings. And while all the talk is about OU making the postseason cut, BU is snubbed by being omitted from the conversation.

The Bears are a dangerous team on defense, leading the Big 12 in takeaways and rank fifth among all FBS schools with 28 on the season, including six in last weekend’s romp over Kansas. Baylor caused chaos in the previous meeting with Oklahoma, with one interception and five forced fumbles – recovering two of those loose balls.

The Sooners have nine giveaways over those previous five outings after recording only seven in the first seven games of the schedule. The wheels are wobbling on the ole Sooner Schooner, and while it might not be enough to deny Oklahoma its fourth straight Big 12 title it’s enough to convince us to fade OU and side with “Sic ‘Em” and the points this Saturday. 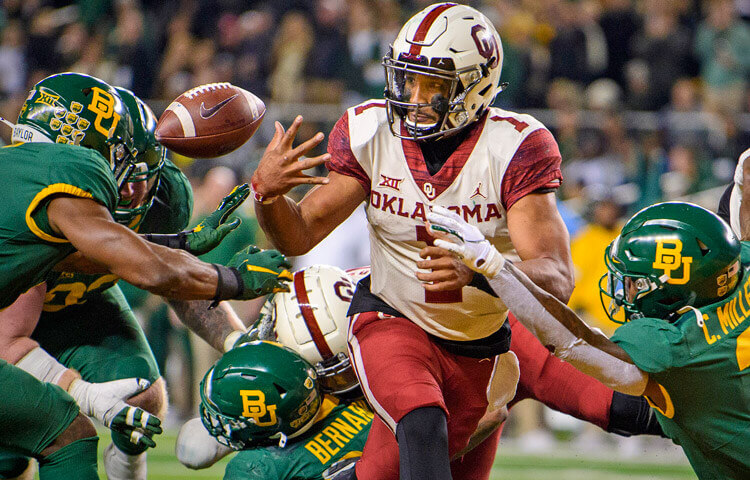 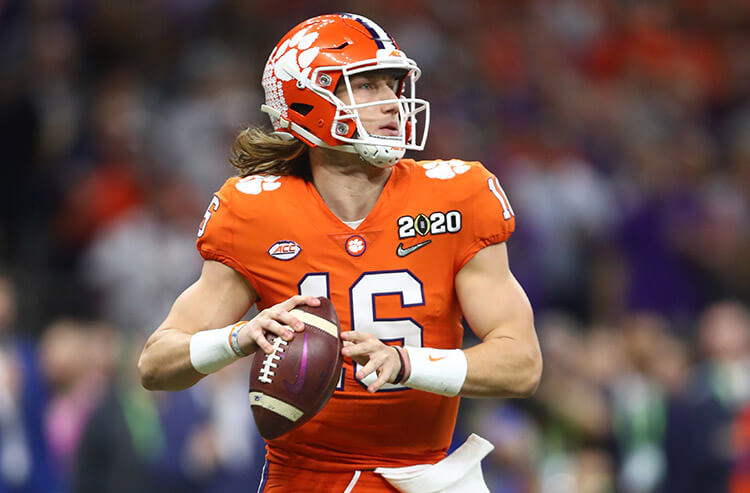 Futures odds hit the board for 2021 College Football national championship 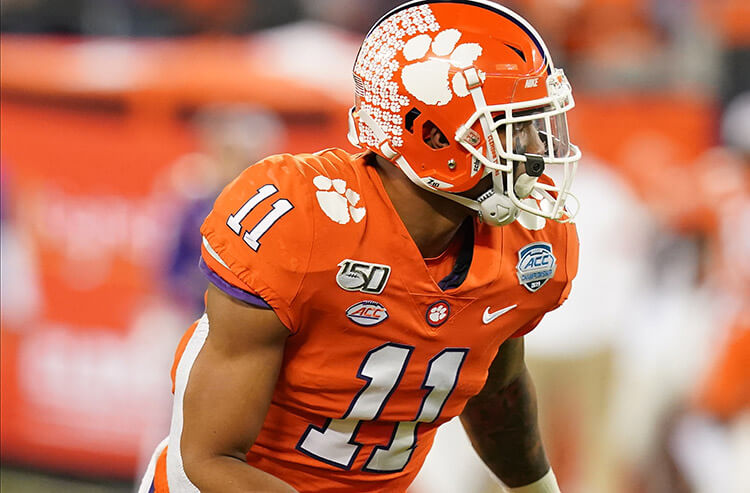 CFP championship action and odds: Book rooting for Clemson, Under vs LSU 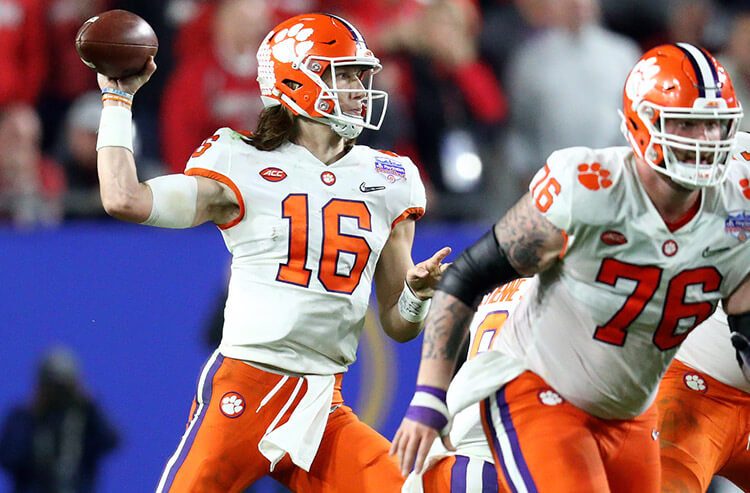