USFL Championship Odds: Undefeated Stallions Off to the Races

Betting odds for the 2022 USFL Championship are available, with Week 5 of the inaugural season taking place over the weekend. Find out each of the eight teams' odds to be the league's first champion below.

The brand-new United States Football League is six weeks in, with a certain team holding on to the top spot. Eight teams across two divisions will battle it out over a 10-game schedule leading up to the playoffs and first-ever championship in Canton, Ohio.

After this weekend's play concluded, the Birmingham Stallions remain on top of the board. Check out the rest of the changes on the odds board in our USFL odds below.

Standing tall in the top spot is Birmingham. The Stallions moved to 6-0 after handling the Michigan Panthers (+5,000) in a 33-17 win. Birmingham remains the only undefeated team left in the USFL.

Next up for Birmingham is a date with the 1-5 Pittsburgh Maulers on Sunday.

The New Jersey Generals are first in the North Division and have won five straight after losing in Week 1. The Generals are coming off an epic 26-25 win over the Gamblers in Week 6 action and will face the  3-3 Tampa Bay Bandits on Saturday.

Rounding out the Top 3 at +350 are the New Orleans Breakers.

They have the third-most points offensively in the USFL behind the Stallions and Stars thus far, and improved to 4-2 over the weekend with a victory against the lowly Maulers.

The Breakers will continue their chase of the Stallions when they face off against the Panthers next Saturday.

The first USFL Playoffs are scheduled to begin on June 25 once the regular season wraps up. The top two teams from the North and South divisions will play a semifinal game and the two winners will meet in the inaugural championship game a week later.

Both playoff games and the championship game will be played at Tom Benson Hall of Fame Stadium in Canton, Ohio.

The inaugural USFL Playoffs and Championship Game are coming to Canton, Ohio ???????? pic.twitter.com/o62xQQHB8M

Which states have legal USFL betting?

The 30 states below have legalized single-game wagering to some degree, whether that be at retail locations or online mobile betting on betting sites. In addition, nine other states are in the process of considering legal sports betting.

If you're in a state that allows mobile, online betting, make sure you know which ones are the best football betting sites. The best betting sites offer sharp odds, quick payouts and are safe and secure when it comes to depositing and withdrawing your money. 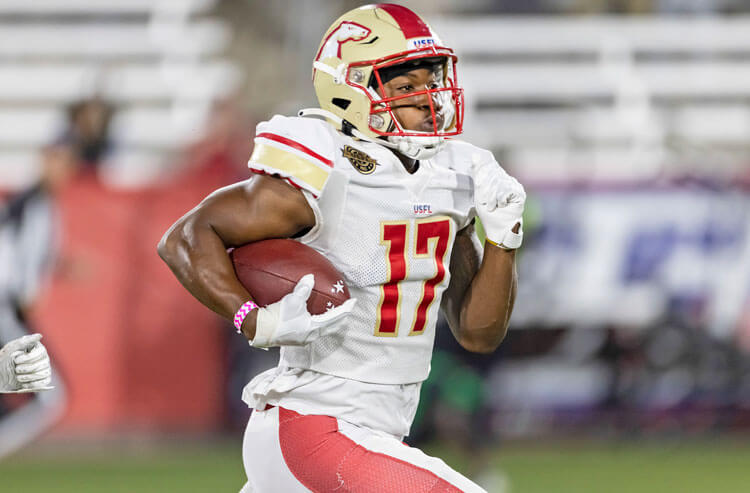 USFL Championship Odds: Undefeated Stallions Off to the Races
Provided by

USFL Week 6 Odds, Picks, and Predictions: Generals are a Safe Gamble Against Houston
JD Yonke | May 19, 2022

Gamblers vs Breakers Week 4 Picks and Predictions: Going All In on Houston
JD Yonke | May 8, 2022