As the league's de facto home team, Birmingham's enjoyed an edge as the lone undefeated team left. While that has no doubt helped it, our USFL betting picks for Bandits vs. Stallions highlight why not to trust Tampa Bay in this spot.

Is it a coincidence that the only team in the USFL with home-field advantage is also the only one with an undefeated record?

The Birmingham Stallions have had to fight to victory in some close games but have come out on top every time. Skip Holtz’s squad battles with the Tampa Bay Bandits (2-1) in one of the top matchups on the board for Week 4.

Will the Stallions keep the undefeated record alive, or will Jordan Ta'amu and the Bandits spoil the fun?

Check out our USFL picks and predictions for the Tampa Bay Bandits and Birmingham Stallions on Saturday, May 7 to find out.

Odds courtesy of DraftKings Sportsbook as of May 7, 2022.

The kickoff is scheduled for 7:00 p.m. local time. It’s expected to be a mostly clear sky in Birmingham with winds of 5 to 10 mph. The high is 81 degrees during the day and the low is 59 degrees at night. Weather is not expected to impact this game.

Bandits vs Stallions picks and predictions

The Birmingham Stallions stand alone as the sole undefeated team after three weeks of the USFL’s return. Skip Holtz appears to have found his quarterback, as J’Mar Smith has stepped into the role and ranks second in the league in passing yards (581) and is tied for first in passing touchdowns (five).

The Stallions don’t seem to be a difficult team to read at this juncture. They’re a good team and are atop the league for a reason right now, but they’re not an undefeatable giant. The Bandits, on the other hand, are a hard team to gauge.

Tampa Bay was anointed a favorite to win it all after a 17-3 victory over the Maulers in Week 1. Led by star quarterback Jordan Ta’amu — arguably the league’s best player — Todd Haley’s crew seemed destined for success in the USFL. An ugly 34-3 demolition at the hands of the New Orleans Breakers in Week 2 quickly put a damper on those hopes.

The Bandits got back in the win column with a 27-26 victory over the Houston Gamblers in Week 3, but it wasn’t all sunshine and rainbows. We’ll put it bluntly — the Gamblers are not a good football team, yet they kept the score within one point. Houston’s moribund offense had success both through the air (240 yards on only 24 attempts) and on the ground (160 yards and a score on 5.2 yards per carry).

Ta'amu had his struggles in Week 2 against the Breakers but has otherwise proven to be one of the better quarterbacks in this league. The Bandits may not have a huge advantage at quarterback, however. Smith has been very impressive for the Stallions, and he has a wealth of offensive talent surrounding him. Receivers Victor Bolden Jr. and Osirus Mitchell both rank in the Top 5 in receiving yards, while Marlon Williams checks in at No. 9.

There are more positives to point to in the Stallions, who have fully utilized their home-field advantage. The Bandits have a solid quarterback in Ta’amu but haven’t proven above-average anywhere else.

The Stallions have a high-flying offense that ranks third in the league with 326 yards per game. They do most of their damage through the air (205.3 passing yards per game) and J’Mar Smith has been a diamond in the rough thus far. Smith should be able to find Bolden, Mitchell, and Williams in open space against the Bandit’s second-worst passing defense.

For as impressive as the Stallions have been on offense, the defense isn’t exactly a stone wall. They allow the third-most total yards per game (336.7) in the league and are susceptible both through the air and on the ground. They’ve thrived primarily off creating turnovers thus far, which has helped mask the fact that they’ve routinely given up chunks of yardage.

The Bandits rank fifth in total defense, allowing 320 yards per game. A closer inspection reveals that their numbers are buoyed by holding the Maulers to three points in Week 1 while allowing 60 points combined in their other two games. The Maulers are the league’s worst offense by a country mile. The Bandits are allowing 30 points per game to non-Maulers teams.

Both coaches could be considered offensive-minded. Skip Holtz has the Stallions primed to put points on the scoreboard each weekend, while Todd Haley is known most for his time as an offensive coordinator and has Ta’amu at his disposal.

We’ll take the Over.

The Bandits may be 2-1 but they have the league’s second-worst point differential (-16) through three weeks. Their lone win came against the league’s worst team in the Maulers.

Jordan Ta’amu was hyped up to be the best player in the USFL, but there aren’t many positives to point to outside of the quarterback room. The run game is non-existent, the receiving weapons are average at best, and the defense is subpar.

We’ll take the Stallions to cover this spread and move to 4-0.

Did you know that if you parlayed our USFL Bandits vs. Stallions predictions, you could win $26.45 on a $10 bet? 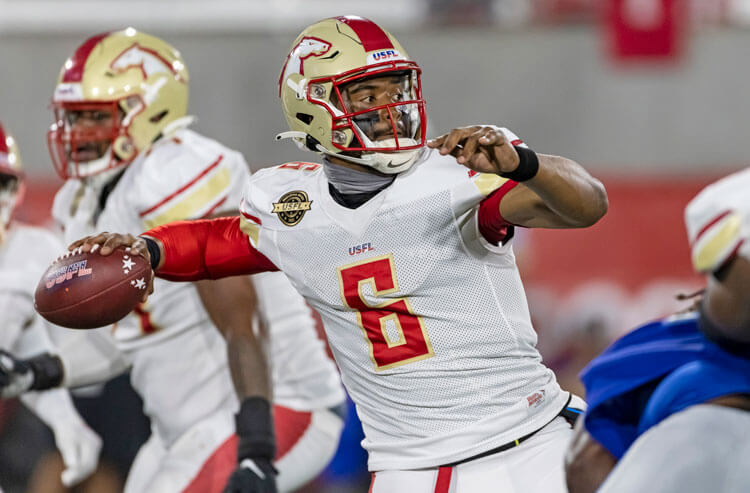