Jacob Markstrom had 34 saves, and Antoine Roussel, Troy Stecher and Brock Boeser scored goals over a six-minute span early in the second period as the Vancouver Canucks eliminated the defending Stanley Cup champion St. Louis Blues with a 6-2 victory on Friday night in Edmonton.

The Canucks, who advanced to the conference semifinals for the first time since 2011, will next play the No. 1 seed Vegas Golden Knights starting Sunday night.

Jaden Schwartz scored two goals for St. Louis. Jordan Binnington, who entered the contest 3-0 with a 0.87 goals-against in three career elimination games while helping lead the Blues to the Stanley Cup last season, stopped just 14 of 18 shots before being replaced by Jake Allen with 11:54 left in the second period. Allen finished with five saves.

Vancouver dominated the first 9.5 minutes of the game, outshooting St. Louis, 13-4, while taking a 1-0 lead on Beagle's ninth career postseason goal. Beagle took advantage of a Blues turnover in their own zone and then beat Binnington on his glove side with a shot from the high slot.

Roussel then started Vancouver's three-goal spurt over 5:57 early in the second period with his second goal of the playoffs. After Sutter stole the puck from Vince Dunn near the blue line, Roussel a wrist shot past Binnington's glove side from the slot.

Stecher, who had the game-winning goal in Game 1, followed with his second goal of the playoffs with a quick wrist shot from the edge of the right circle past Binnington's blocker side. Boeser then made it 4-0 with a power-play goal 77 seconds later, one-timing a pass from Hughes from the left circle inside the left post and sending Binnington to the bench.

Schwartz snapped an 80:41 scoreless streak for the Blues dating back to early in the second period in Game 5 at the 6:32 mark of the third period with his third playoff goal, firing a shot from the right point past a screen by Ryan O'Reilly. It also snapped a 45-save streak by Markstrom.

Motte, who scored only four goals in the regular season, scored his third goal in two games off a feed from Beagle to make it 5-1. The Blues pulled Allen and Schwartz cut it to 5-2 with 1:22 left before Motte sealed it with an empty-netter with 50 seconds to go. 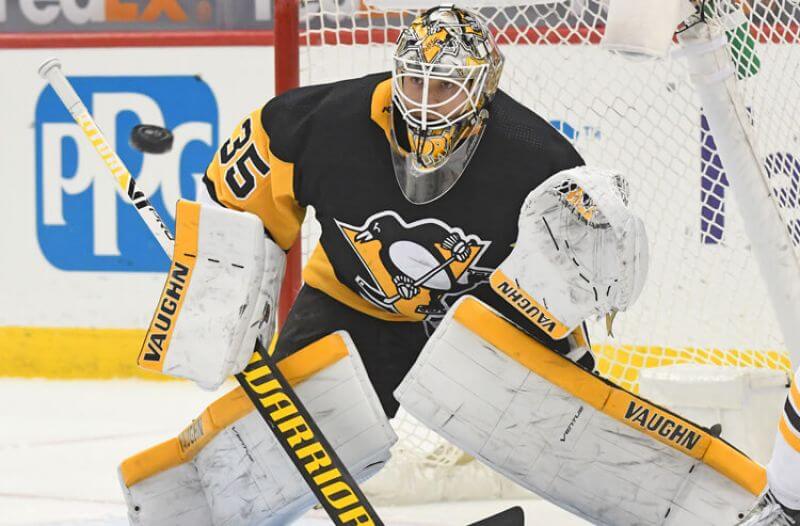 Penguins vs Flyers Picks: Philly Won't Repeat Jarring Win
About Us
Contact Us
Careers
Our Team
Our Community