USA vs Canada Gold Cup Tips and Predictions: All to Play For

First-place Canada and second-place USMNT have been evenly matched through the group stage, separated by just a single goal scored. Canada can top the group with a draw or win — will they hold off the rival USA? Check out our tips and predictions.

With six points from their first two group games each, both the USA and Canada have punched their ticket to the quarterfinals at the 2021 CONCACAF Gold Cup. However, it's all to play for as the two teams meet in the final group stage game. Both countries have six points and a goal differential of +6, but Canada's edge in goals scored (8-7) has them in the top spot and only a loss to the USMNT would change that.

Can the U.S. get the result they need to claim top spot in Group B? Check out our USA vs. Canada tips and predictions.

Sunday afternoon in Kansas City will be a beautiful afternoon, with some clouds and temperatures expected around 80 degrees Fahrenheit.

It's already been a great 2021 for the Canadian Men's National Team, as they advanced into the final stage of World Cup qualifying for the first time since the mid-90s and won the international services of budding MLS star Ayo Akinola. It can get even better on Sunday with a draw or a win, as either result would be enough to see the Canadians finish atop the group ahead of their American rivals.

Impressive in itself is that they have gotten into this position without their two best players in Alphonso Davies and Jonathan David. Tajon Buchanan, tasked with the unfavorable job of replacing already the greatest male Canadian soccer play of all time in the 20-year-old Davies, has been outstanding for the Canadians as a creative force down the left flank. Cyle Larin, meanwhile, has continued his fantastic form for Canada as he leads the Gold Cup with three goals to take his tally to 10 goals in his last eight games for his country.

Before the coup of Akinola switching to Canada, coach John Herdman had pulled off a similar win as midfielder Stephen Eustaquio declared for the team after playing for Portugal at youth levels. Eustaquio promises to add quality in midfield and has scored his first two goals for Canada in each of their games at the Gold Cup (though he will miss this one due to yellow card accumulation). The newcomers to Canada's squad only emphasize what has become an undeniable reality: Canada's men's soccer team has not only proven depth but genuine quality.

That quality will now face its toughest test yet, as they face arguably CONCACAF's best team with the group on the line. Though the USMNT are considerably deeper and more talented than Canada, the Gold Cup squad is a susceptible group after they chose to take a heavily MLS-based, experimental roster. After an underwhelming 1-0 win against Haiti to begin the tournament, the U.S. played considerably better in a decisive win over Martinique, during which it became clear they were chasing goals in order to match Canada's goal difference.

While their 6-1 victory may have been expected, the breakout of striker Daryl Dike was a massive win in itself. Possibly the hottest name in American soccer at the moment, Dike notched his first competitive goal for the U.S., added another, then nearly got the hat-trick. He'll again be the focal point for the USA against Canada, but Les Rouges' three-man backline should do well enough to contain Dike's outstanding movement. (Granted, his finishing is so clinical that he will need just a moment to get back on the scoresheet.)

The first two group stage games have shown the USMNT and Canada are evenly matched at the Gold Cup, and in a head-to-head matchup, there's no reason to expect that to change.

Both teams to score

Even with the entire knockout stages to come, Canada and the U.S.'s group-ending game promises to be one of the games of the Gold Cup. The tempo should be absolutely fantastic, with Canada better going forward than in defense, and playing some entertaining, direct soccer both through the middle and down the wide areas.

The United States, meanwhile, will be forced to go for it against Canada, as a draw is no worse than a loss as far as positioning in Group B. Their two attacking midfielders should have more time on the ball against Canada, with Eustaquio suspended. That will be trouble as the task of marking Dike for more than a few seconds, with his athleticism and movement off the ball, is an absolutely brutal one. 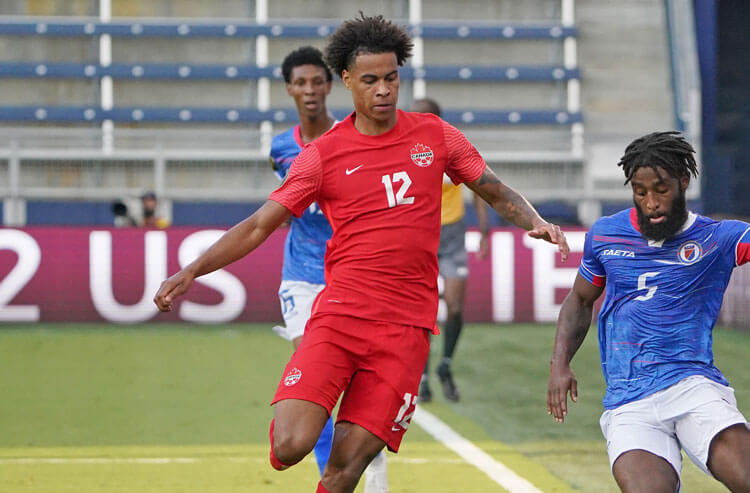 USA vs Canada Gold Cup Tips and Predictions: All to Play For
Provided by