Paris Saint-Germain wrestled the title back last season and open as heavy Ligue 1 odds favorites ahead of 2022-23. Check out the full odds to win Ligue 1, and PSG's closest competitors for the French title, below.

Lille's title defense was largely nonexistent last season, as the defending French champions finished 10th and 31 points back of the title.

In that sense, it was a return t the norm for the French league, with Paris Saint-Germain heavy Ligue 1 odds favorites all season until securing the title. The 2021-22 title was PSG's eighth of the past decade and an early look at the odds to win Ligue 1 in 2022-23 suggests the French heavyweight will make it consecutive crowns.

Here's an early look at the full Ligue 1 odds.

PSG ran away with Ligue 1 last season and secured the title with a month to spare. Their title defense received a huge boost before the previous season ended, as Kylian Mbappe surprisingly renewed with PSG for three more years.

Despite an eighth-place finish last year, Lyon are second on the odds board at +1,600. After a long Europa League campaign and losing Brazilian midfielder Bruno Guimaraes in January, the club may be expected to rebound, but further exits could be ahead with No. 10 Lucas Paqueta the subject of transfer rumors.

PSG's rivals finished as the runner-up last season — but 15 points back of the champions. Marseille have already lost a key player in midfielder Boubacar Kamara but as always, they'll go as the ageless Dimitri Payet goes. The winger totaled 22 goals + assists a year ago and will again power Marseille as they attempt to challenge the giants of Ligue 1.

Ligue 1 futures odds are constantly adjusted throughout the offseason due to player transfers and injuries. Once the season begins, title odds will change as teams win and lose games and as more players get hurt or suspended. Sportsbooks will also adjust Ligue 1 odds based on handle and liability to certain teams.

This means that on a $100 bet, you'll stand to win $715 if Marseille wins the Ligue 1 Championship. If it's close to the end of the competition (or in the case of a massive early-season favorite) you might see a team with a minus sign (-) ahead of its odds.

Above we have posted the American odds for Ligue 1. However, these are easy to convert to decimal odds or fractional odds with our odds converter tool.

Saint-Etienne, Marseille, and PSG are tied for the most Ligue 1 championships with 10 apiece. 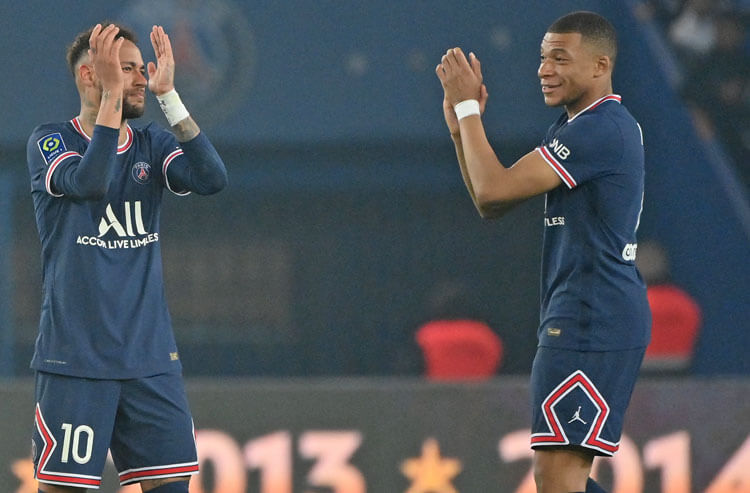