Sportsbook.ag opened the odds on Trump’s impeachment the day after the 2016 election results, setting “No” as a big -550 favorite. However, those odds have slimmed with every blunder and bad move from the White House.

Leaking information is nothing new in sport betting. A lot of the time, that’s how wiseguys scoop the books and how the sportsbooks stay ahead of the betting public.

Leaks in the political ring, however, well that’s a matter of national security. At least that’s the way the Washington Post is painting it after blowing the whistle on U.S. president Donald Trump for spilling the beans on classified information regarding an ISIL operation to Russia’s foreign minister and ambassador.

That leak and the shit storm that proceeded it forced bookmakers to pull down many of their political prop odds regarding Trump Monday, most notably the odds on whether the president would be impeached in his first term and whether or not he would make it the full four-year term.

Online market Sportsbook.ag pulled their Trump betting odds off the board as soon as news broke about the leaks and waited nearly 24 hours – feeling out the political and media backlash – before reopening betting on “Will Donald Trump be Impeached in his First Term as President of USA?” and “Will Donald Trump Serve a Full Term as President of USA?”.

“This latest fiasco, the Washington Post's story of Trump giving up intelligence to the Russian's last week, could be the straw that breaks America's back,” Peter Childs, supervisor of risk management for Sportsbook.ag, tells Covers. “Republicans are now coming out against Trump and that really makes impeachment possible.”

Sportsbook.ag opened the odds on Trump’s impeachment the day after the 2016 election results, setting “No” as a big -550 favorite. However, those odds have slimmed with every blunder and bad move from the White House and following these recent leaks – and Trump’s reaction on Twitter - the odds on impeachment re-opened with “Yes” and “No” at a flat -115 each (wager $115 to win $100).

“While we knew impeachment was a definite possibility, we felt it was still a long shot. But that was six months ago and it really seems like Trump is unhinged,” says Childs, who is dealing "No" Trump won't serve a full term at -135, with "Yes" coming back at +105.

“Personally, I can't see how anyone could last 3.5 more years like this. (Trump is) completely over his head and at some point I believe he's going to step down and put (vice president Mike) Pence in office.”

Should Trump avoid impeachment and make it the full four years, oddsmakers have him set as a heavy +250 favorite to win the 2020 presidential election, however, those odds were as low as +170 at some sportsbooks the day before the leaks.

Behind Trump on the 2020 betting board is Dem. Senator from Massachusetts Elizabeth Warren (+1,000), vice president Mike Pence (+1,500), as well as Dem. New Jersey Senator Cory Booker, Dem. California Senator Kamala Harris, and Dem. Tom Perez all at +2,000. Behind those front runners: Oprah Winfrey at +2,500.

“A little bit yes,” Childs said when asked about betting action on Oprah’s presidential aspirations. “Really the only exposure is on (Joe) Biden (+5,000) and Hilary Clinton (+10,000) of all people. Can't imagine she even thinks about running but our customers have been enticed by the 100-1 price.” 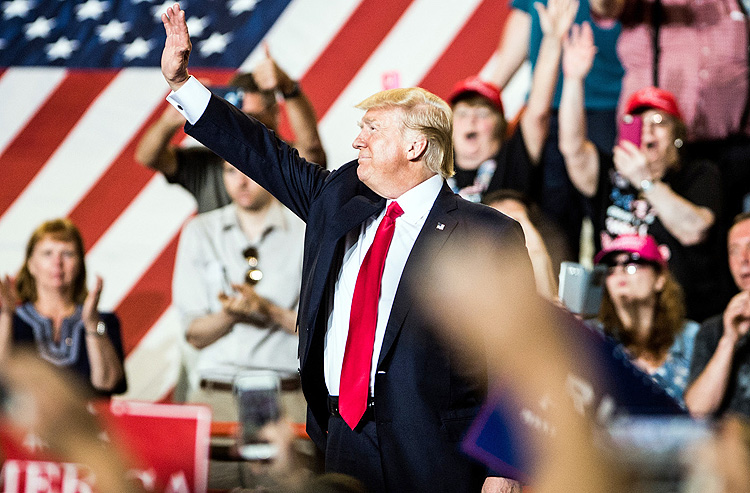