Marc-Andre Fleury is still a stellar keeper, and Vegas is still a force to be reckoned with. Get our Knights vs. Canadiens picks for Game 6, and find out if they can shut the door on the underdog Habs.

The Vegas Golden Knights face off against the Montreal Canadiens in Game 6 of the Stanley Cup semifinals Thursday night. The Habs won decisively in Game 5 and now get the chance to eliminate the Knights in front of 3,500 fans at Bell Centre.

Vegas entered this series with the best odds to win the Stanley Cup but NHL betting lines have shifted with the Knights now +350 to win the cup and -144 faves tonight.

Here are our best free Golden Knights vs. Canadiens picks and predictions for Thursday, June 24, with the puck dropping at 8 p.m. ET.

William Hill US's Nevada operations are in a rare spot of needing the hometown team tonight. The Golden Knights opened -145 favorites late Tuesday night and dropped to -140 Wednesday on the way to -135 today. As of 5:30 p.m. ET, Vegas is still -135. "We need the Golden Knights, believe it or not. They've given up betting VGK," WillHill director of trading Nick Bogdanovich said of straight-bet action, though the Knights are taking more parlay play than the Canadiens. Bogdanovich made no bones about wanting a Game 7. "That would be wonderful." The total hasn't budged off 5 (Over -130), and Bogdanovich said there's not much interest yet in that market.

The Under is 24-6-7 in the Canadiens' last 37 playoff games as an underdog. Find more NHL betting trends for Golden Knights vs. Canadiens.

Game 5 on Tuesday was all Canadiens as they went into Vegas as +210 underdogs and took it to the Knights, winning by a final score of 4-1. Former Knights draft pick Nick Suzuki was the hero for Montreal, grabbing a pair of helpers before icing the game with a goal of his own in an empty net.

This was the second game in a row that the Habs thoroughly outplayed the Knights, but this time Vegas couldn't steal the game in overtime. The Canadiens have been terrific during their recent playoff run, going 10-2 in their last 12 games and outscoring opponents 36-23 over that span.

That said, there's a reason the Knights dominated the regular season, finishing tied for the league's best point percentage (.732) and leading the NHL with a goal differential of plus-67. This is a deep and dangerous squad with plenty of playoff experience. And even in the postseason, the Knights have dominated the Habs in two crucial categories: faceoffs and puck possession.

Vegas leads the league in faceoff win percentage during the playoffs (53.6) while the Habs rank ninth at 49.3 percent. Montreal also ranks ninth in Fenwick For Rating while the Knights rank second. When the Knights opened as massive -250 faves on Tuesday, the betting value was squarely on the Canadiens, but with their line swinging to a more reasonable -145 tonight, there are plenty of reasons to back them.

With the Golden Knights 9-1 in their last 10 games following a loss of three or more goals, expect Peter DeBoer's squad to bounce back with a win and send this series to seven games.

This series has yet to see a single game go Over the total, although exactly five goals have been scored on four occasions.

Montreal goalie Carey Price had another terrific performance on Tuesday, turning aside 26 of 27 shots. The seven-time All-Star has been on fire during the playoffs, going 11-5 with a 2.02 GAA and a save percentage of .933. Part of the reason for that has been Montreal's play in front of him, with Phillip Danault and his linemates doing a great job of shutting down opposing team's top lines.

The Habs penalty kill has been particularly outstanding, leading the NHL with a 93.2 penalty kill percentage during the playoffs and making the Knights go 0-13 with the man advantage this series.

The Knights are very strong in nets as well, even though Marc-Andre Fleury struggled in Game 5 and lost Game 3 with a brutal error behind the net in overtime. Fleury is still a three-time Stanley Cup winner who is a finalist for the Vezina Trophy this year after going 26-10 with a 1.98 GAA and .928 save percentage during the regular season.

The Knights could opt to go with Robin Lehner between the pipes instead and they'll be in great hands either way. Lehner carried the Knights during their postseason run last year, going 9-7 with a 1.99 GAA and a save percentage of .917. He also stole the show against the Habs in Game 4, allowing one goal on 28 shots.

Vegas allowed a league-low 2.18 goals per game during the regular season so expect better play in nets after an uncharacteristic showing in Game 5. After all, the Under is 6-1 in the Knights last seven games following a loss of three or more goals. We should see dialed-in defensive play and outstanding goaltending from both sides tonight so back the Under.

Did you know that if you parlayed today’s NHL Golden Knights vs. Canadiens picks, you could win $24.98 on a $10 bet? 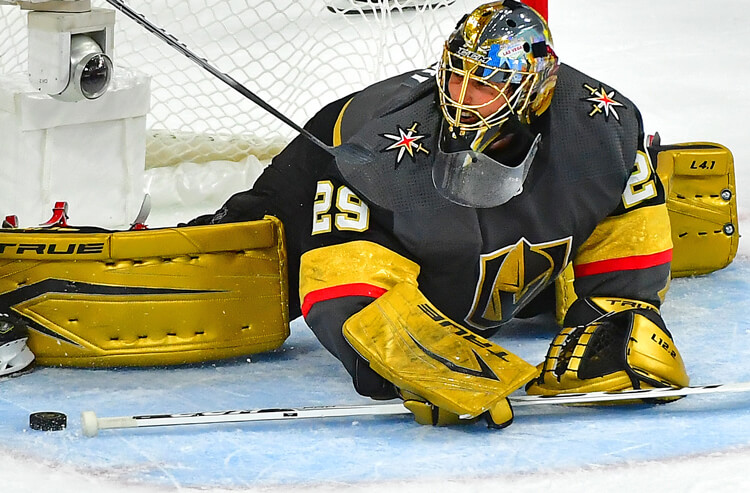 Golden Knights vs Canadiens Game 6 Picks and Predictions: Must-Win for Vegas
Provided by