A 4-1 loss was not fully indicative of Game 1, as Montreal played better than the score would show. Penalties and poor defense were the issues, but if they clean up those areas, the Habs have some intriguing NHL betting value tonight.

The Vegas Golden Knights took the opener in their Round 3 series against the Montreal Canadiens by a score of 4-1 thanks to some stellar goaltending, yet again, by Marc-Andre Fleury.

The Knights also made the Habs do something they haven’t had to do in seven games which was play from behind. Vegas played with a two-goal lead for nearly 36 minutes despite losing the expected goal battle 4.4 to 3.39.

The Canadiens opened as +235 underdogs, higher than the price they closed at in Game 1. The total opened at 5.5 and is tilted heavily to the Under with some books posting the flat 5.

Here are our free picks and predictions for Montreal Canadiens vs. Vegas Golden Knights for Wednesday, June 16, with puck drop set for 9:00 p.m. ET.

The Over is 4-0-1 in Golden Knights’ last five games as a home favorite. Find more NHL betting trends for Canadiens vs. Golden Knights.

The Montreal Canadiens came out buzzing in Game 1 but found themselves down 1-0 after 20 minutes, thanks to the stellar goaltending of Vegas’ Marc Andre-Fleury. The veteran goalie didn’t look like a netminder who needed any rest, stopping 28 of 29 shots and finishing with an absurd 3.4 goals saved above expected. Montreal had more scoring chances and high-danger shots but Flower was the difference.

Carey Price made some massive saves during the game but allowed four goals with just 2.56 xG. The Montreal goalie also had to deal with a lot of traffic and shots from the point as the Vegas defenders continued to rack up points in the playoffs.

Through 14 postseason games, the Golden Knights’ defensemen have nine goals and 38 total points. The Habs can shut down any line they want but if they can’t stop the Knights’ D-men from getting shots through and joining the rush, it could be trouble for the underdogs.

Speaking of trouble, Montreal may have plenty of difficulty in gaining the offensive zone as Twitter's Jack Han (@JhanHky) tweeted after Game 1. The Golden Knights play a 1-2-2 neutral zone defense which gave Montreal plenty of trouble on Monday. It will be something they will need to adjust to as the Leafs and Jets both played a 1-1-3 in the middle part of the ice. The Habs are the ones usually forcing other teams to adjust but Dominique Ducharme will be busy with the whiteboard heading into Game 2.

The Canadiens also greatly missed the presence of defenseman Jeff Petry, who is questionable for Game 2 (hand). The thin defense got exposed in the second period in Game 1 when they took three penalties in the frame’s first half and had to play their bottom-six defenders more than they would have liked. Petry skated earlier in the week and his addition to the lineup would be huge as he was second on the team in points during the regular season.

Montreal failed to capitalize on their opportunities and the lack of discipline and penalties kept their skilled players off the ice for long stretches of time. The Knights did a great job of getting long shots from the point through and clogging up the neutral zone. However, the 4-1 score seems lopsided considering how good Fleury played.

We were definitely high on the Habs heading into the series and aren’t going to let one game sway us from getting great prices on the board. We aren’t rolling with the ML Wednesday and instead are hitting the +1.5 at a decently priced -120. Montreal’s mistakes are fixable and Game 2 will be a huge indicator of the team’s ability to adapt on the fly.

Monday’s game opened at 5.5 but closed at an even 5 on a few respected books. The Over 5.5 could have easily hit if it weren’t for some highlight-reel saves from both goaltenders. The game finished with a total of 7.79 xG while the Knights showed their dominance at 5-on-5.

Game 2 opened at 5.5 but jumped to 5 quickly, indicating public (or sharp) interest in the Under — Over bettors might be getting a discount on Wednesday.

The Habs showed some terrible play on the blueline with six of their D-men finishing with a combined minus-nine. Erik Gustafsson, Alexander Romanov and Brett Kulak got torched all game with the latter two finishing with a 0 percent Fenwick, thanks to creating just one shot attempt while being on the ice for 12 from the Knights.

If the Habs are forced to use these two together, don’t be afraid to hit the Vegas scoring props.

One bright spot in Game 1 for Montreal was the play of rookie Cole Caufield. The young forward led the team in Corsi and Fenwick percentage, recorded six shots on net and buried their only goal in Game 1. Due to the string of infractions in the second period, the youngster wasn’t able to get his usual shifts and should see more ice if the Canadiens can stay out of the box. He is shooting just 3.6 percent through 10 playoff games, which is too low of a number for the talented sniper: More goals should be coming.

With what the Knights lack in power-play success, they make up for it in blueline offense. Three different defensemen picked up a goal in Game 1 while five of the six rearguards collected a point.

It looks like coach DeBoer intends to create traffic in front of Price and kick it out for a screened point shot. Vegas attempted 62 shots at net and managed to get 47 through. We liked the pace of Game 1 and have no problems hitting the Over 5 despite the goaltending play.

Did you know that if you parlayed today’s NHL Canadiens vs. Golden Knights picks, you could win $21.91 on a $10 bet? 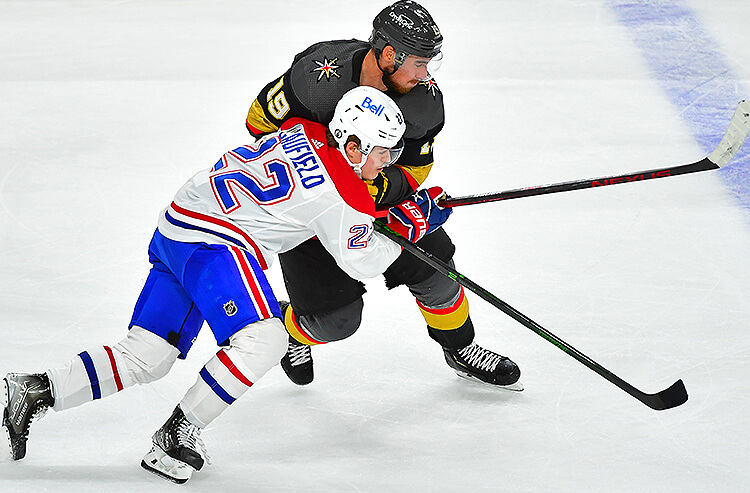