Montreal has won seven straight but enters Game 1 against the Golden Knights as a massive +230 underdog. Can the Habs, behind Carey Price, steal Monday's series opener in Vegas? Find out with our best Canadiens vs. Golden Knights picks and predictions.

The Montreal Canadiens and Vegas Golden Knights will kick off their Round 3 series on Monday as the odds-on favorite Knights look to end the Canadiens’ impressive seven-game winning streak.

The Habs have been the beneficiaries of some luck through their first two playoff series but that shouldn’t dismiss their recent success. This series could be a lot closer than many people think.

Here are our free NHL betting picks and predictions for Canadiens vs. Golden Knights on June 14.

TwinSpires Sportsbook pegged Vegas a -265 favorite at the outset, rose to -275, then receded to -250, where the moneyline sits at 6:15 p.m. ET. The Golden Knights are taking 70 percent of tickets, but money is closer to two-way, with 55 percent on the Knights. "We saw respected money come in on the Canadiens +220. We're down to +200 now," TwinSpires trading analyst Zachary Lucas said. The total is steady at 5.5, with 66 percent of tickets/55 percent of cash on the Over.

The Canadiens are 7-0 SU in their last seven games. Find more NHL betting trends for Canadiens vs. Golden Knights.

Since defeating the Avalanche in the previous round, the Golden Knights have become the odds-on favorites to win the Cup at +120. This is likely because they face the Canadiens, who had the lowest point total of all 16 playoff teams. But the NHL postseason is a different beast and one the Canadiens are built for.

The Knights are the better team on paper, but so were the Maple Leafs and Jets. Montreal may be the best blueprint for a successful underdog team in the league. For starters, they have arguably the most experienced goalie in Carey Price, who has been instrumental in a handful of national gold medals. Price has more than double the expected goals saved/60 than any opposing goaltender this postseason. And his counterpart, Marc-Andre Fleury, has played a ton this year and, as a 36-year-old goalie, may not be built for such a heavy schedule late in his career.

Secondly, the Canadiens have no real strengths offensively. That may sound detrimental but when Peter DeBoer and the Knights are drawing up a game plan, there really isn’t one thing they can focus on. It will be a huge difference from Vegas having to watch Nate MacKinnon a series ago to a totally new strategy versus a new opponent.

Additionally, Montreal won’t get beat by taking penalties and will force the Knights to win at 5-on-5. The Canadiens have the playoffs’ best PK at 90.3 percent. The next best team is the Wild, who lost to the Knights in seven games. The Knights’ PP has not been a threat all postseason.

It will be a big blow to the Habs if Jeff Petry can’t suit up for the opener. The top blueliner has been playing heavy minutes but so have all the Montreal top-four D-men. Brett Kulak stepped into the top-four role when Petry missed Game 4 in the second round and finished with a plus-1 rating and an assist with two shots on net. The Habs have some depth at the position and should be able to weather the storm until Petry returns.

Finally, when we're offered a +230 odds in hockey it's an almost blind take. Hockey has more bounces than any other sport and outcomes are based heavily on these random occurrences. The Habs won seven straight games and haven't even trailed over their last seven hours of ice time and books want to give us this price still? Sign us up.

Both teams are a combined 10-14 Over/Under in the postseason, with the Canadiens being the more profitable Under team with a 4-7 O/U mark. Fleury and Price have been stellar all playoffs, ranking No. 2 and No. 3, respectively, in GAA. Each veteran goalie has posted a sub-2.00 GAA through a combined 23 postseason contests.

Montreal has held a pair of Top-12 offenses to below their season goals per game average through two rounds and will now try to shut down a Vegas offense that is coming off an emotional series win. Many have said that the winner of the Golden Knights/Avs series would likely win the Cup — the books see it the same way — but it will be tough to regroup after knocking off Colorado and facing a team that all talking heads have said they should easily beat.

Neither team has much going for them on the PP which has us eyeing the Under immediately. Both clubs have combined for just 10 PP goals through 24 games.

The Canadiens have had ample time to plan after sweeping the Jets in four straight games. Giving this team any more time to perfect a perfect checking game is a scary thought.

Phillip Dannault is turning into one of the best shutdown centers in the league and it’s a shame that it’s hard to find a line on him for the Conn Smythe. The Knights also have a great shutdown forward in Mark Stone. There's plenty of defense to go around this series and it has us hitting the Under in the opener.

Did you know that if you parlayed today’s NHL Canadiens vs. Golden Knights picks, you could win $48.00 on a $10 bet? 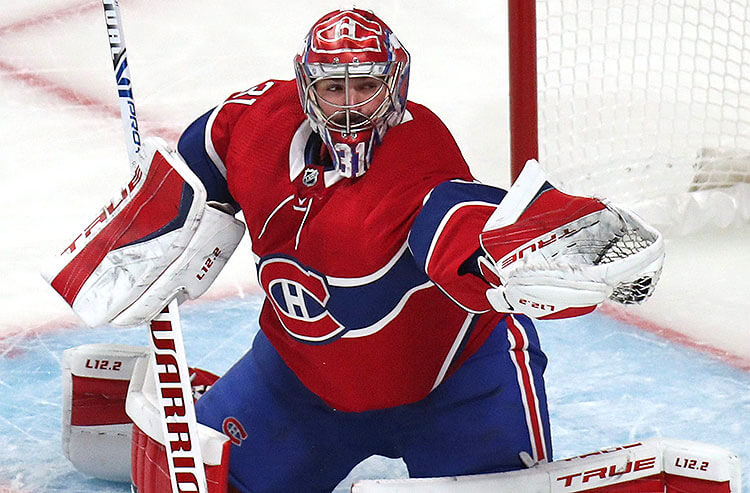