Clemson has won two of the last three national championships and is a heavy -700 favorite to win its fifth consecutive ACC title.

Ah, the ACC. The dominion of the reigning national champion Clemson Tigers. And from the outlook of things, it looks like it will continue to be their domain to rule for the foreseeable future.

Clemson has won four straight ACC Championship Games, two of past three national titles and hasn’t had fewer than 10 wins since 2010. So, the question is: Is there no surer bet in college football than Clemson? We answer that, plus give our favorite bet/fade, Over/Under, season win total picks, and much more as we breakdown the odds in the ACC for this college football season.

Is calling Clemson the potential best bet in 2019 a little on the nose? Well, who cares if it is. The Tigers are the best team in the conference, and it really isn’t even that close. Clemson went 9-6 ATS last season on its way to its second national championship in three years and the scary part is the Tigers may be even better this year. Trevor Lawrence will probably be even better his second year in Death Valley, same for Travis Etienne. And while their All-NFL defensive line is, well, in the NFL, there are plenty of blue chippers in the pipeline.

The only problem standing in Clemson’s way may be the spread. The Tigers could beat several teams in this conference by 50 points, but the question is, will they? It’s the Alabama effect. Go up by a bunch early, but have to sweat out a big line in the second half when the reserves are in. That said, Clemson went 7-3 ATS when favored by 16 or more against ACC opponents.

It seems like the only good thing Bobby Petrino did his second go around in Louisville was being blessed with having Lamar Jackson as a quarterback. Now, he leaves the program in a state where dumpster fires have a better setup.

The onus is now Scott Satterfield to turn around the Cardinals. He’ll be equipped with many returning starters, including quarterback Jawon Pass, four of his top five targets at wide receiver and nine starters on defense. Unfortunately, those players were part of a team that ranked 109th in total yards, 122nd in points scored on offense and 122nd in total yards and 128th in total yards in points allowed on D last season. They covered just one game all year and it feels like more of the same this season.

We’re still waiting for Dino Babers and Syracuse to get the respect they deserve. After a 10-win season and coming within a hair of upsetting Clemson in Death Valley oddsmakers set the Orange’s regular season win total at a modest 7. This is likely due to the fact that dual threat quarterback, and Syracuse all-time passing leader, Eric Dungey is gone. But this is still Babers’ offense, which ranked second in the ACC in yards per game. The Orange is also returning four of their top five receivers and have former four-star recruit Tommy DeVito ready to step in for Dungey.

If there is one place Syracuse needs to improve it’s on the defensive side of the ball. They ranked 10th in the ACC in average yards allowed per game and allowed a few too many big plays last season. So, the combination of underrating of Babers and his offense, and the potential for getting burned on defense every now and then could make Syracuse a great Over play this season.

It has been an interesting offseason for Miami after the surprise retirement of head coach Mark Richt. The defense should once again be a terror in the ACC, particularly under new head coach Manny Diaz. But The U won’t be back until they get consistent quarterback play. Ohio State transfer Tate Martell is supposed to be the saviour, but word is he has yet to separate himself from incumbent N’Kosi Perry. Which isn’t ideal. Unless, you’re betting Unders that is! With expectations high heading into this season, a defense that could have four or five all-conference players and more shaky play under center, this team should be a perfect combination for cashing Unders, especially early in the season.

The Cavaliers are my sleeper team to win the Coastal division. Bryce Perkins is the best quarterback in the ACC not named Trevor Lawrence. But the key here is the defense Bronco Mendenhall keeps building. Led by star cornerback Bryce Hall, this unit can be one of the best not only in the conference, but in the country. The Cavs have an easy non-conference schedule and should be able to knock off four more wins in the less-than-strong Coastal.

Life in Durham is going to be tough without Daniel Jones. David Cutliffe is great with quarterbacks, but it could be a few years before the next Jones emerges for the Blue Devils. As for 2019, Duke’s non-conference schedule is brutal with matchups against Alabama and Notre Dame. They also visit Virginia Tech, Virginia and two of their last three games are against Syracuse and Miami. Not only will the offense struggle without Jones, the defense that ranked 77th in total yards and 105th against the rush isn’t getting any better.

KEEP AN EYE ON ALL THE COLLEGE FOOTBALL WEEK 1 LINE MOVES RIGHT HERE!

Boy, last season was one to forget for Florida State. Jimbo Fisher bolted for Texas A&M, to be replaced with Willie Taggart, who failed to lead the Seminoles to a bowl game for the first time in 36 seasons. Thirty-six. Luckily for FSU and their 127th ranked rushing attack, super-talented running back Cam Akers is back at full health, they have a fully restocked offensive line and an offensive coordinator (Kendal Briles) who is committed to running the ball. If quarterback James Blackman continues to develop, Florida State should be able to return to a bowl game this season.

After a five-year hiatus, Mack Brown is back coaching in college football, returning to the program he spent a decade at before heading to Texas - North Carolina. The 67-year-old should reinvigorate a program that probably wasn’t as bas as its record suggested. The Tar Heels return some talented skill position players that could take another step forward with Brown’s coaching. It could be a couple of seasons before we see the full returns from Brown, but UNC should show some promise and going over their season win total of 4.5 seems very much within reach.

Speaking of Mack Brown, it’s an interesting season for the ACC with four programs bringing in new head coaches. In addition to Brown heading home to North Carolina, Georgia Tech hired Geoff Collins away from Temple, Louisville brought in Scott Satterfield from Appalachian State, and Miami promoted defensive coordinator Manny Diaz. Of the four, Brown is the only one with head coaching experience in a Power 5 conference and for Diaz (who actually served as Brown’s defensive coordinator for a time in Texas), it will be his first college head coaching gig of any kind. Keep a close eye on all these programs, particularly early in the season to see how the kids respond to their new leaders.

BEST VALUE TO WIN THE ACC

Is this really a surprise to anyone? I know you have to wager $400 on Clemson to win $100, but let me tell you something. You are winning $100. No one else in this conference is on Clemson’s level. This offense put up 44 points on Alabama in the national championship and they will be better this season. Dabo Sweeny has built the co-premier program in the nation (along with Bama) and it’s hard to see them losing before the College Football Playoff. Place the bet. And wait for the inevitable return on yout investment. 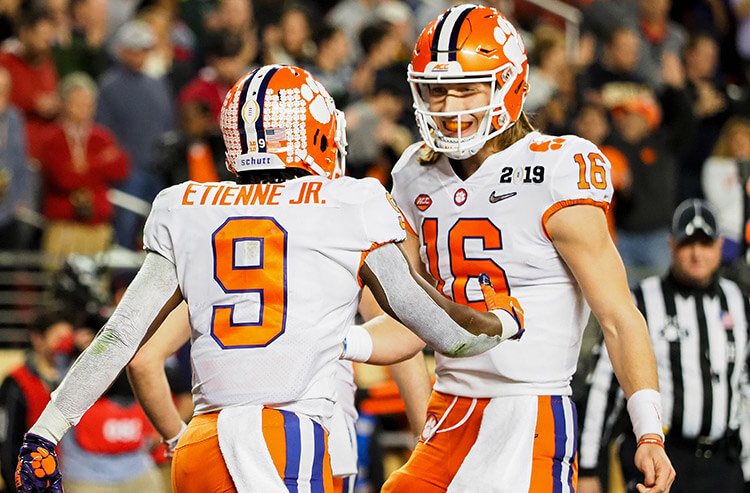