While there's always the fear of a letdown with TCU entering this contest off a big win over Kansas, our college basketball betting picks don't see how the Sooners can keep this tight — despite their tendency to do so.

The Oklahoma Sooners head to Fort Worth to take on the No. 11 TCU Horned Frogs in NCAA hoops action on Tuesday night.

Both schools are trying to find some consistency in a very competitive Big-12 conference and while the Horned Frogs are coming off a highly-impressive road win against Kansas, the Sooners have dropped three of their last four.

College basketball odds for this conference showdown opened with the Frogs as 7-point home faves before shortening to as low as -5.5. Check out my best free Oklahoma vs. TCU college basketball betting picks below.

There are some concerns about laying six points with the home side here. After all, the Oklahoma Sooners have a tendency to keep things close and the TCU Horned Frogs could be in a letdown spot after a massive victory in Lawrence.

However, this line certainly doesn't appear inflated by recency bias. Keep in mind that the Sooners were 10.5-point underdogs on the road against the Jayhawks two weeks ago and were 5-point away dogs against a middling Texas Tech team just before that.

Oklahoma is 2-5 against Big-12 foes and the two teams they defeated (Texas Tech and West Virginia) are a combined 1-13 in conference play and the Sooners barely edged both of them.

This is also a poor matchup for the Sooners who tend to be sloppy with the ball, rarely get to the charity stripe, and have seen their perimeter shooting regress lately.

The Sooners are 255th in turnover rate (19.3%) and will be harassed by a tough Horned Frogs defense that has the 16th-best opponent turnover in the country. The Frogs do an excellent job of pressuring opposing ball handlers while also fouling on defense at the 19th-lowest rate in the country.

The Sooners already don't get to the free throw line much and that issue could be exacerbated. The Sooners also entered last week having shot a sizzling 37.3% from deep but they went a combined 9-36 against Oklahoma State and Baylor and now face a TCU squad that limits foes to 29.6% shooting from long range.

Oklahoma has been heavily reliant on Grant Sherfield to generate offense and if the Frogs' stingy perimeter defense can keep him in check, force turnovers, and push the tempo, they'll cover this spread.

A) Get a 50% profit boost for TCU and Texas both to win tonight at DraftKings! Opt-in Now

TCU is coming off a shocking 23-point blowout win on the road against the Jayhawks, who were the No. 2 ranked team in the country at the time. It was a complete performance from the Frogs, who shot 54% from the floor while forcing 17 turnovers, limiting the Jayhawks to 39% shooting and having a 35-28 edge in rebounding.

That massive victory allowed TCU to bounce back from a road loss to West Virginia and improved its record to 4-3 SU and 4-2-1 ATS in Big 12 play.

The Horned Frogs looked terrific in non-conference play beating Providence, Iowa, and Utah, with their only defeat coming by a single point in November when they were missing their best player Mike Miles and another starting guard, Damion Baugh.

Miles leads the team in scoring with 18.9 points per game on 52.6% shooting while Baugh paces the squad with 5.0 assists and 2.1 steals per game while chipping in with 12.2 ppg. Forward Emmanuel Miller averages 14.0 ppg on 57.8% shooting while grabbing 6.3 rebounds per game.

TCU is 14th in the country in adjusted defensive efficiency according to KenPom, while ranking 58th on offense.

The Sooners are on a two-game skid and are fresh off a 62-60 loss at home to Baylor. They held the Bears to 36% shooting in that contest but went 5-21 from beyond the arc themselves while getting to the line for just four free throw attempts.

Oklahoma is 2-5 SU (3-3-1 ATS) in conference play and almost all of those contests have been very close. With the exception of a 16-point road loss against Oklahoma State last Wednesday, their other six conference games were all decided by five points or fewer.

It'll be interesting to see which team can implement its preferred style in this matchup. Oklahoma plays at a sluggish tempo and ranks just 325th in adjusted tempo. On the other hand, TCU likes to push the pace and their average length of possession on offense (16.0 seconds) is the 33rd-lowest number in the nation.

Even though the Sooners have generally been efficient when it comes to shooting the ball, they struggle with turnovers and offensive rebounding.

TCU has been efficient from inside the arc shooting 53.5% from 2-point range with that number surging to 57% in its last three games.

With both teams shooting poorly from beyond the arc and the Sooners trying to slow this game down to a crawl, the Under might be worth a look. 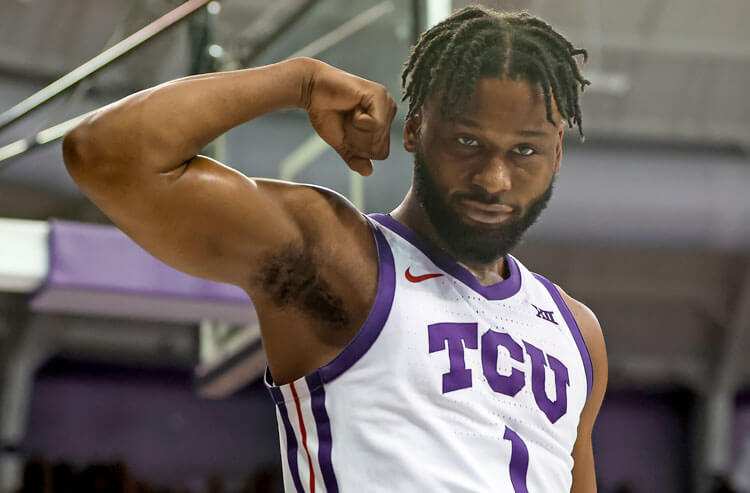