LeBron James-led teams are 18-5 straight up against Kevin Durant-led squads since KD entered the league in 2007, including a 15-8 ATS record.

Open up the beer fridge, pass the Pringles and turn up the “Roundball Rock”: the NBA Finals tipoff on Thursday when the Golden State Warriors host the Cleveland Cavaliers. Before you place your finals wagers, take a look at these 10 need-to-know betting notes:

• Twitter trolls are having all sorts of fun reminding the world that ESPN’s Stephen A. Smith is 0-6 in his last six NBA Finals predictions. NBA oddsmakers have done better, but not as well as you might guess. The series underdog is batting .500 in the last 10 Finals.  The 2006 Heat, 2008 Celtics, 2011 Mavericks, 2012 Heat and 2016 Cavaliers all won despite wearing the dog tag.

• LeBron James-led teams are 18-5 straight up against Kevin Durant-led squads since KD entered the league in 2007. That includes the 2012 Finals when the two squared off and LeBron got the best of Durant in five games. As far as ATS, James’ sides are 15-8 ATS against Durant’s teams.

• James was the best player in five of the last six NBA Finals. Oddsmakers list him as the favorite for most points and assists in the series and have him as the third fave for most rebounds. He has four career finals MVP awards and the only other player in this series with one on his resume is Andre Igoudala – and his really should have been given to James. With all this said, James is still listed as the third favorite (+240) to win the finals MVP behind Durant (+200) and Stephen Curry (+210).

• If you like to play first-half bets, Golden State is probably your best option. The Warriors are the best first quarter team in the postseason in terms of net rating (+32.1 points per 100 possessions) and are +112 in point differential in first halves. The Cavs, on the other hand, are the best third quarter team in the playoffs with a +25.8 net rating. Cleveland has trailed in three games by double digits but came back to win each one.

• A lot has been written already about the Game 1 total but just a reminder: the number at 225.5 is the largest total in recorded betting history of the NBA Finals. It’s a 14.5-point jump from the Game 1 total in last year’s Finals. Golden State’s offense is in better shape with a healthy Curry and Durant taking Harrison Barnes’ spot. Cleveland’s offense is much improved compared to last year’s edition. All that being said, the increase in stakes, competition and rivalry should equal lower-scoring games. The Under is a combined 7-4-2 in the last two finals matchups between these two sides.

• The Game 1 spread (7 points) is the largest in the NBA Finals since 2007 when the LeBron-led Cavs were getting 7.5 points against the San Antonio Spurs. The Spurs won and covered in that game and swept the Cavs in the Finals.

• Golden State was 25-5 SU versus Eastern Conference opponents this season, but just 14-14-2 ATS. The Warriors were a great Under bet in non-conference contests, with a 9-21 Over/Under mark. Cleveland stumbled against the Western Conference, with a 16-14 SU and 11-18-1 ATS mark, going 16-14 Over/Under in those games. 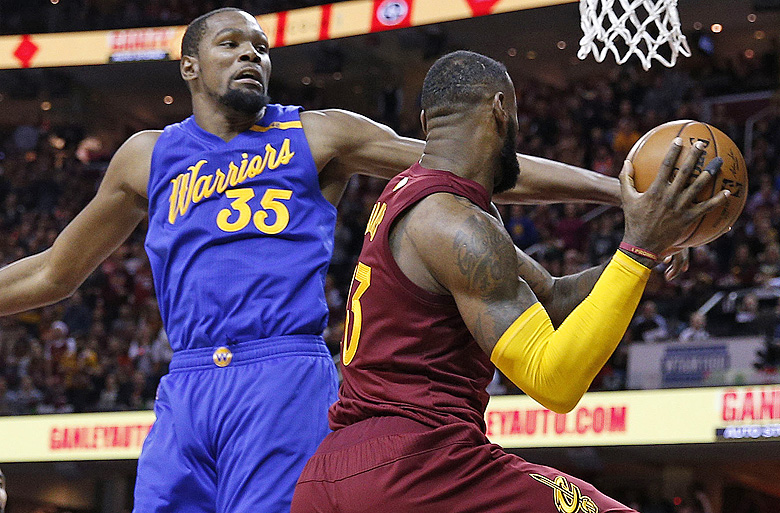