Despite a loss in the Battle of LA last night, things are looking up for the Lakers with Anthony Davis set to return in a juicy spot vs. the Spurs. Our NBA picks highlight where the value as the Lakers host San Antonio.

Life in Lakerland is looking up, with Anthony Davis set to return and a guaranteed playoff spot in the West within reach. A matchup against the rebuilding San Antonio Spurs is a golden opportunity to pad their record.

At 14-33, the Spurs are prioritizing minutes for younger players like rookies Jeremy Sochan and Malaki Branham, and there are major flaws defensively whenever Jakob Poeltl isn’t on the floor. They’ve lost seven of their last eight games and gave up 147 points against Portland last time out.

Find out more in our free Spurs vs. Lakers NBA picks and predictions as we dig into tonight’s matchup.

Spurs vs Lakers picks and predictions

The Spurs are in the thick of the race for Victor Wembenyama and Scoot Henderson, so it’s all about player development and the draft lottery these days. That means the door is wide open for the Lakers to rebound from last night’s disappointing loss — and they’ll certainly get easier looks.

San Antonio is allowing the most points per game in the NBA (122), with opponents shooting over 50% from the field (also a league-worst mark). That’s unlikely to improve against a hungry Lakers team boosted by Anthony Davis’s return and the arrival of Rui Hachimura.

The Spurs have allowed more than 130 points in each of their last five losses — a somewhat natural by-product of playing inexperienced line-ups and a young group that’s still finding its way in the league.

Portland shot 60% from the field against San Antonio on Monday night, with Damian Lillard and Anfernee Simons combining for 63 points. So, it’s reasonable to expect much more production from the Lakers’ backcourt of Russell Westbrook, Dennis Schroder, and Patrick Beverley, who combined to go 8 of 30 from the field last night.

This is a matchup where LeBron — whose 46 points against the Clippers means he’s now had a game with at least 40 points against all 30 teams in the league — might otherwise have sat out, but he’s likely to play given his pursuit of Kareem’s record.

With King James in attack mode and Davis back on the floor, I expect the Lakers to score freely tonight and hand the San Antonio defense another rough night.

A) Get three 25% profit boosts for any NBA game tonight at DraftKings! Opt-in Now

In contrast to the Lakers’ solid January form, the Spurs have gone 2-9 this month, so it’s easy to see why L.A. is a big favorite, even after playing last night. The Lakers have been ATS monsters against weaker opponents, covering in 14 of their last 16 games against teams with a losing record.

The biggest concern with picking the Lakers to cover might be their disastrous recent second-quarter performances. The Clippers outscored them 40-24 in the second frame last night, and the Trail Blazers blitzed Darvin Ham’s men 45-13 in that spot on Sunday. Davis’s return, however, could help the Lakers’ rotation in that susceptible spot.

Three of the Spurs’ last four losses have been by a double-digit margin, including a 31-point loss to the Warriors earlier this month, but they kept the score close in a 131-126 loss to the Clippers on Friday.

The Lakers should get whatever they want offensively tonight and all the recent trends point to the Over with these two teams. The Over is 8-0-1 in the Spurs’ last nine road games against teams with a winning home record and has hit in San Antonio’s last nine Wednesday games.

Don’t overthink the Lakers being on the second night of a back-to-back set either. The Over is 6-1 in their last seven games playing in this spot without a rest day. The Over is also 9-3-1 in the last 13 meetings in L.A.

These teams played two very different games in late November, with a 105-94 scoreline followed by a 143-138 shootout (both Lakers wins). It feels like tonight will be closer to that high-scoring showdown.

The Over is 7-1 in the Lakers’ last eight games after a SU loss by more than 10 points. Find more NBA betting trends for Spurs vs. Lakers. 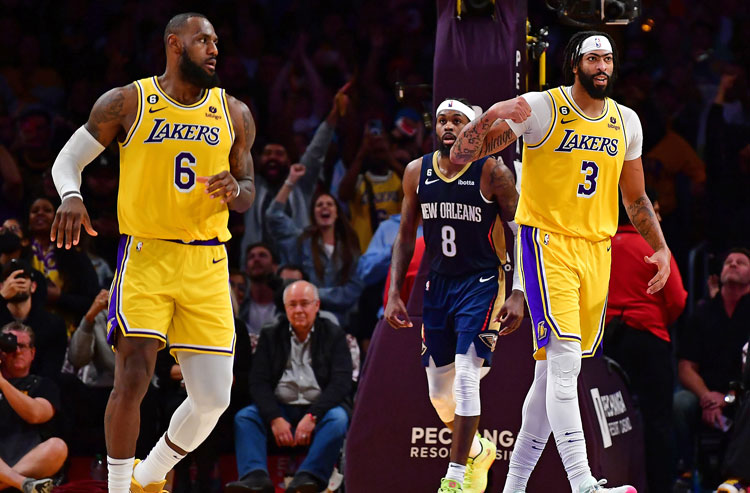 Spurs vs Lakers Picks and Predictions: Full Strength LA Beats up on San Antonio
Provided by