Lakers vs Spurs Picks and Predictions: God Save the King

NBA fans can look forward to the return of the King, as LeBron James suits up for the Lakers for the first time in more than two weeks. We examine what to expect from the league's second most prolific scorer.

How long does it take to recover from a massive beatdown? The San Antonio Spurs are hoping it’s only six days, as they take on the Los Angeles Lakers for the second time in a week.

L.A. crushed San Antonio the last time these two franchises clashed, coming away with a 123-92 victory that was even more lopsided than the final score suggests. The Lakers led by as many as 34 points in the fourth quarter before allowing everyone other than the towel boy to play.

Will San Antonio bounce back tonight at home, or will L.A. continue to roll with LeBron James back in the line-up? Find out in our free NBA picks and predictions for Lakers vs. Spurs on Friday, November 25.

Lakers vs Spurs picks and predictions

All hail the King! LeBron James is expected to return to action tonight for the first time in 16 days after straining his left adductor in a game against the Clippers. The Lakers managed to go 3-2 in his absence, but there’s no doubt they’ll be happy to welcome back the NBA’s No. 2 all-time leading scorer.

The big question is how much will James play this evening? The Lakers clearly didn’t need him in their first meeting with San Antonio, easily defeating the overmatched Spurs by 31 points while LeBron cheered from the sidelines.

Lonnie Walker and Austin Reaves both stepped up with outstanding efforts, but the real star of the show was Anthony Davis, who pumped in 30 points and 18 rebounds in just 28 minutes. It marked the third game in a row that AD had recorded 30 points and 15+ boards.

Although Los Angeles will clearly benefit from having LeBron back, this has become Davis’ team. The eight-time All-Star is leading the Lakers in win shares and box plus/minus, and has seen his usage rate grow from 25.7% to 34.5% during James’ absence.

Davis has become L.A.’s top player at both ends of the court and Darvin Ham has increasingly begun to run sets through his big man, as few teams have a player capable of matching AD’s combination of size, skill, and mobility.

Davis’ emergence comes at the perfect time for LeBron, whose health and availability have become an issue in recent years. James will turn 38 on December 30 and has missed 30% of his games since joining the Lakers. Some of his injuries have been merely bad luck, but others point to clear wear and tear and could potentially have been prevented with more rest and better management.

The Lakers are keenly aware of the fact that LeBron is losing his battle with Father Time and are certain to keep a watchful eye on his minutes tonight to preserve him for what they hope will be a deep postseason run.

Count on a breezy win for the Lakers and a modest night for the King, who is still working his way back into game shape after being inactive since November 9. He’ll get in a sweat, but Davis will continue to do the heavy lifting.

The Lakers opened as 5.5-point favorites, which seems curiously low given how savagely they punched the Spurs in the mouth on Sunday. L.A. controlled virtually every facet of play in that dustup, from the war on the glass (54-44) to points in the paint (60-58) to points off turnovers (18-11).

It was a complete and absolute show of dominance by a team that finally seems to be figuring things out after stumbling out of the gates. The Lakers even shot 35.3% from beyond the arc, a mark that would have been unthinkable several weeks ago when they were off to a historically bad start from deep.

It's worth noting as well that the Lakers steamrolled the Spurs without LeBron in the lineup. It’s fair to wonder just how much he’ll play tonight in a game that may be out of reach early, but we are talking about an 18-time All-Star and four-time MVP who has averaged 28 points, 7.3 rebounds, and 7.6 assists in 38 career games against the Spurs. Had James been available, as he will be tonight, the bleeding could have been even worse.

It was also just the second game of the year for Thomas Bryant and Dennis Schroder, a pair of offseason acquisitions who have since had a chance to improve their conditioning and get in some much-needed reps in practice.

The Lakers’ coaching staff has been especially complimentary of Bryant, whose size and athleticism had been sorely missing in the team’s frontcourt rotation. The 25-year-old big man demonstrated especially good chemistry with Russell Westbrook against the Spurs, finishing with 15 points on a variety of alley-oops and hard rolls to the hoops.

The 6-13 Spurs shouldn’t be discounted entirely, but there’s a reason why Gregg Popovich told reporters that “nobody here should go to Vegas and bet on this team to win the championship.” San Antonio is clearly in rebuilding mode this season and management won’t shed a tear if another loss brings them one ping-pong ball closer to drafting French phenom Victor Wenbanyama.

Unlike the Lakers, who are trending upwards, the Spurs have lost six straight games, and have been outscored by 22.3 points per contest during that stretch. Things may eventually get better in the Alamo City, but it won’t be tonight.

Can you smell that? It’s the Spurs' defense, and it stinks worse than a landfill at high noon.

San Antonio has given up 120 points or more in four of its last six games and has allowed teams to average 125 per contest during that span. That’s the second-worst mark in the league over that period, and it gets worse the deeper you dig. The Spurs have also allowed opponents to shoot 54.6% from the floor and 45.3% from deep amidst their current six-game slide.

Stops haven't been coming easily for the Lakers lately either. L.A. surrendered 123 points per contest during its recent five-game losing streak and gave up 115 points to a Phoenix team missing Chris Paul, Cam Johnson, and Landry Shamet on Tuesday.

The Lakers’ defense could struggle again this evening without professional pest Patrick Beverley. The three-time All-Defensive player has been suspended three games by the NBA for shoving Suns center Deandre Ayton in the back earlier in the week. Beverley ranks fourth on the team in steals and blocks and is, without question, the last person rival ball handlers want to see when they cross over halfcourt.

Bettors understand that these teams have been hemorrhaging points lately, which is why the opening total of  228.5 has since been up to 232.5 at most books. In this case, the public is onto something as neither squad has shown an ability to slow down opponents in the past week.

The Spurs are 0-4 ATS in their last four games overall. Find more NBA betting trends for Lakers vs. Spurs. 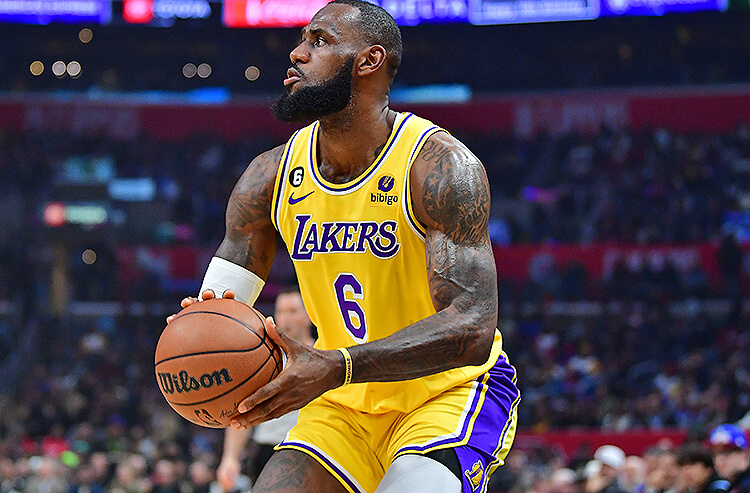 Lakers vs Spurs Picks and Predictions: God Save the King
Provided by