We're back with a lineup of player props for Heat vs. Celtics Game 4, including a breakdown of Derrick White's return to the rotation and Marcus Smart's continued playmaking dominance.

The Boston Celtics evened things up against the Miami Heat with a win in Game 2 of the Eastern Conference Finals, and they’ll now look to take a 2-1 series lead now that the series is heading to TD Garden. As always, we have you covered with a preview of this game here.

If you’re not looking for moneylines, spreads, or totals, this is the place for you. We’re diving into some of our favorite player props for Heat vs. Celtics, so keep reading for some fun plays for tonight’s battle.

After missing Game 2 to be there for the birth of his child, White will return to action for the Celtics in a pivotal Game 3 in Boston.

The team was able to win without him in Game 2 in Miami, and the stellar play of Marcus Smart — and productive bench minutes from Payton Pritchard — certainly helped the Celtics. However, White has earned his spot in the rotation with his excellent play on the defensive end since Boston acquired him from the San Antonio Spurs, so he should end up seeing some good minutes.

White played 29 minutes in the Game 1 loss at FTX Arena, and he averaged 27.4 minutes per game with the Celtics during the regular season. Now, White is playing 24.2 minutes per game in the postseason, which is a slight drop but still more than enough for him to get to six points.

White averaged 14.4 points per game with the Spurs this season and averaged 11.0 in the regular season with the Celtics. The postseason has been a bit of a disappointment on the offensive end for the two-way combo guard, but we know he is capable of putting the ball in the basket.

Also, with defenses collapsing on Jayson Tatum and Jaylen Brown, White is going to get some good looks — especially from three. We like White’s chances to knock down a few shots, so he’s worth backing with this ridiculously low number.

Adebayo has had his struggles in this series, as he is averaging just 8.0 points and 6.5 rebounds per game thus far. He also had no blocks in Game 2, with the Celtics largely getting better play from their two centers, Al Horford and Robert Williams III, than the Heat did from their All-Star big man.

Look for that to change the rest of the series. Miami might not end up advancing to the NBA Finals, but Adebayo is a tough, prideful player that will do everything in his power to make sure he’s not a weakness moving forward.

As far as his props tonight go, the line for Adebayo’s blocks being at 0.5 is disrespectful. Adebayo had four blocks in Game 1, and he’s one of the best defensive big men we have in this league. Even if his shot-blocking isn’t exactly a calling card, we’ve seen him make some incredible plays because of his great defensive instincts and remarkable timing.

Also, after Adebayo put up a dud in Game 2, there should be some serious hunger on his end in Game 3. He’s going to play with a chip on his shoulder, and it’s just hard to see him not swatting at least one shot here.

The return of Smart is what ultimately swung this series back in Boston’s favor, as the guard had 24 points, 12 assists, nine rebounds, and three steals in his return to action in Game 2. It was an incredible performance after Smart was forced out of action in Game 1, and he’ll now look to parlay that into a solid Game 3.

Smart’s assist total is currently just 6.5 in this game, despite the fact that he had 12 in a game in which he was also wildly productive as a scorer in Game 2. He's also exceeded this number in five of his last eight games.

Smart might not be a true point guard, but he serves as the table-setter for this Boston offense, and his job is to get the Celtics players the ball in their best spots, and he’s quite adept at doing so.

Look for Smart to be a little less aggressive as a scorer and expect him to focus a little more on managing this game. There will be a lot of emotions with this being a home game, and Smart will be counted on to settle everybody down and be the leader. 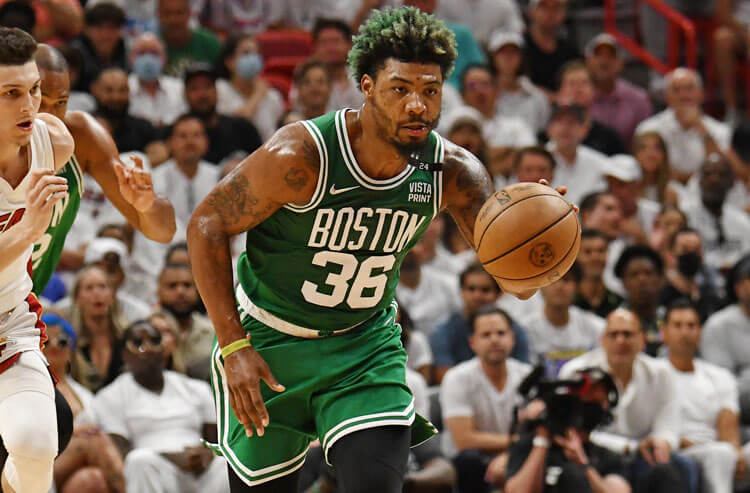