The line has seen lots of movement with Giannis Antetokounmpo going from doubtful to out and Trae Young questionable. Milwaukee went from -4.5-point fave to -2, while the total has plummeted to 215.5. Find out who we like in our Hawks vs. Bucks picks.

The Atlanta Hawks were able to steal Game 4 without Trae Young in the lineup and they’ll now try to take a lead in the Eastern Conference finals in a crucial road tilt against the Milwaukee Bucks at Fiserv Forum on Thursday.

Can Milwaukee take back control of the series without Giannis Antetokounmpo, who is out tonight after injuring his knee?

Find out with our free Game 5 NBA betting picks and predictions for Hawks vs. Bucks on July 1.

(Editor's Note: These picks were made prior to Thursday evening's news that Trae Young would be out tonight.)

William Hill US, fully expecting Giannis Antetokounmpo (knee) to be out when it first posted this number Wednesday morning, opened Milwaukee a 3-point favorite. This morning, the line dipped to -2, then returned to -3 by lunch hour and went to -2.5 early this evening. However, a couple of hours before tipoff, Hawks star Trae Young (foot) was ruled out, as well, and the Bucks moved to -4. It's two-way action with a lean toward the Bucks, at 52 percent of bets and 55 percent of cash. The Hawks are drawing the bulk of moneyline action. "We need a Bucks win," WillHill director of trading Nick Bogdanovich said. The total is down to 215 from a 218 opener, with 55 percent of bets/57 percent of money on the Under.

The Hawks are 5-2 ATS in their last seven games as road underdogs. Find more NBA betting trends for Hawks vs. Bucks.

The Hawks caught the Bucks sleeping in Game 4, earning a 22-point win without their star point guard.

Normally, that type of loss could be shaken off in a seven-game series, but Milwaukee now has serious problems with Antetokounmpo out for Game 5, and it wouldn’t be surprising if he doesn’t come back at all. With that said, the Bucks squandered a chance to seize control of this series last game, and they’re now in a predicament where they can easily lose this series.

If Young ultimately ends up giving it a go in Game 5, the Hawks are a tremendous value as both a spread and moneyline play. Without Giannis on the court, Atlanta is easily the more talented team between these two. Giannis’ game just means so much to the Bucks on both ends of the floor, and Khris Middleton and Jrue Holiday could struggle to step into roles as the first and second options in this game.

Atlanta plays very good defense, and that wouldn’t change even if Clint Capela is out. Backup center Onyeka Okongwu is a future two-way stud and he’s more than ready to contribute right now.

And even if Young doesn’t end up playing in this game, we saw in Game 4 that this Hawks team can generate offense without him. Lou Williams, Bogdan Bogdanovic, and Danilo Gallinari are all excellent offensive players, and Cam Reddish is a guy that could give Atlanta some two-way energy off the bench.

Overall, it makes a lot of sense to take this early and hope that Young plays, as it’s not a lost cause if he ultimately decides to rest for one more game — which feels somewhat unlikely considering he apparently looked good during shootarounds before Game 4.

When the Hawks put Nate McMillan in charge, this team instantly started to play better defensively. Atlanta’s defense is a huge reason the team is just two wins away from the NBA Finals.

The Hawks certainly aren’t perfect on that end of the floor, but they make opponents work and have done that against the Bucks in three of these four games. Also, the Under has hit in eight of Atlanta’s last nine games. The same goes for eight of Milwaukee’s last 11 games, and this is another team that takes pride in its defensive ability.

Without Giannis, the Hawks might have a bit of an easier time getting buckets, but this should still be somewhat of a low-scoring game. These teams combined to score only 198 points in Game 4.

Bogdanovic injured himself in the series against the Philadelphia 76ers and he didn’t look quite the same early in this one.

However, the sharpshooter ended up getting himself back on track in Game 4, scoring 20 points in the blowout victory. He also looked great on the defensive end, suggesting that his full range of motion might be coming back.

With Young either out or banged up, the Hawks are going to need another big performance out of Bogdanovic. He’s more than capable of putting up 20 again, especially considering he gets a ton of good looks at the basket. 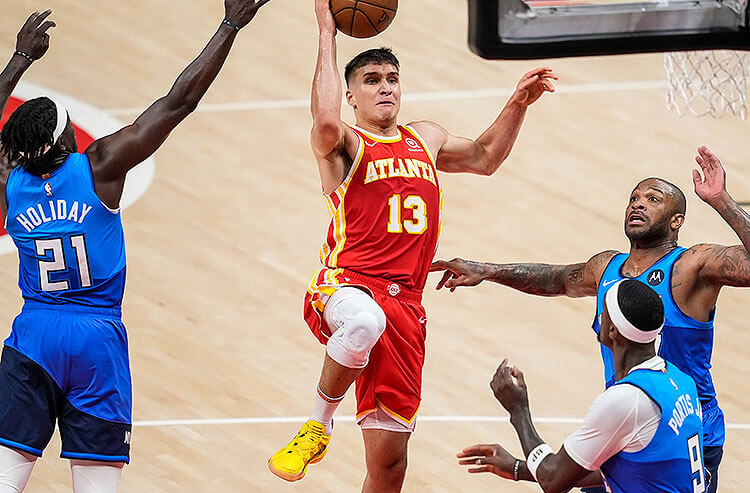