Ja Morant knows his team needs a big game from him tonight, and in what's sure to be a fast-paced, frenzied shootout, he'll have plenty of opportunity for huge numbers. Find out more as our NBA picks preview Grizzlies vs. Warriors.

The Memphis Grizzlies will be hungry for revenge two-fold Wednesday night.

Not only did Memphis suffer a humiliating loss to tonight's opponent, the Golden State Warriors, on Christmas Day's national TV showcase, it's lost three straight following an 11-game win streak.

Meanwhile, Golden State's seeking any kind of momentum in its season, still straddling the play-in tournament, but still within 2.5 games of homecourt in a clustered West playoff scene.

Our free NBA picks for January 25's Grizzlies vs. Warriors showdown focus on one Grizzly who is guaranteed to show up tonight.

Grizzlies vs Warriors picks and predictions

Ja Morant is an absolute menace. A tenacious competitor and shit-talker, Morant's not only unapologetically brash, but good enough to have backed up every single word of it his entire career.

Morant's both Memphis' best player and a galvanizing force who understands his importance to the franchise, and prides himself on putting on for his city. And right now, his city's reeling.

After ripping off 11 straight wins, the Grizzlies have dropped three in a row, each deflating and embarrassing in its own right. The team's been playing listless, sloppy basketball, showing cracks amid its developing status as the wrestling heel of the NBA.

But Morant gets up for these games and will understand the paramount need for a monster performance against the Grizzlies' biggest rival. We can just count on him to show up tonight, plain and simple.

Beyond the underlying motivation, Morant faces several matchup pluses for stat-padding against the Warriors:

Golden State plays at the NBA's fastest pace, enabling a two-way track meet with a team like Memphis that also run-and-guns. Yes, this is baked into Morant's slightly-inflated lines, but not to the extent I believe it compounds the above and below factors.

The Dubs have no natural cover for Ja, and he will absolutely hunt Jordan Poole in any minutes they mirror. On the season, per Fantasy Pros' NBA defense vs. position, the Warriors barf up the league's fifth-most DFS points to opposing point guards.

Morant uncorked 36/7/8 in Memphis' 123-109 Christmas Day loss to Golden State, a game in which the Grizzlies shot 41% from the floor and a particularly rancid 9-39 (23%) from long range. Morant still racked up eight assists and easily smashed the Over on his points + rebounds + assists market.

We're looking for him to do the same tonight, stuffing the box score in a matchup where his impact will be heavily felt. Memphis should hit a few more of the looks he creates, and what projects as a shootout will give Morant plenty of opportunity to put up a huge line.

We know Morant's going to show up, but betting this spread hinges entirely on whether you believe the rest of the Grizzlies will too.

Memphis is catching points (3 to 3.5 as of late Wednesday morning) for three main reasons:

2. Golden State beat the living crap out of Memphis the last time they faced off.

3. The Grizzlies are having a mild midseason crisis and have been playing with the cohesion and composure of a late-game Jenga tower for the past week.

Both these sides have been relatively level ATS propositions this season, with Memphis at 22-23-2 and Golden State a notch behind at 22-24-1. Not surprisingly, that record leaps to 14-8-1 at home for GSW, while the Grizz are conversely 8-15-1 as the road squad.

Dillon Brooks figures to draw the Stephen Curry assignment and provided he can stay out of foul trouble, he's about as effective a means of containing Curry as exists. But Memphis will miss Steven Adams' burly presence on the glass, preventing it from really flexing an edge against an opponent with a below-average rebounding rate.

It might seem tempting to back the Grizzlies getting points against what, at face value, has been a vastly inferior team this year. But Golden State's home-away split is becoming less small-sample fluff, and Memphis' current form is very tough to trust after utter implosions in three straight games.

This is a tough get-right spot against a team with more experience and the definite mental edge, but Memphis is angry and arguably the team with the greatest raw upside in the NBA. Bet either side at your own peril here.

245 is a huge number, but it's also not an unrealistic one for two teams that play at a breakneck back-and-forth pace and will be forced for portions of this game to have minus defenders somewhere at the point of attack.

There are only so many places to hide Morant and Poole, so even if Brooks keeps Curry from completely going off (FWIW, Curry's shoulder is definitely throwing his shot off, he's shooting just 35% from long range this month) there's potential for eruption elsewhere.

Also key will be turnover points, as Memphis is infamous for creating pressure turnovers and taking off sprinting, which Golden State is more than happy to oblige with, owning the NBA's second-worst turnover rate.

The Grizzlies were well on their way to an Over against the Kings and a lofty total of 244.5 the other night, before sabotaging themselves with a hilariously bad 10-point fourth quarter in which they seemingly committed dumb turnovers on 200 straight possessions.

This matchup profiles in a somewhat similar vein, but Golden State is somewhat more likely to lean into defensive competencies than the Kings, who simply don't have any. Against this high of a total, it creates slight hesitance on an Over, but that's definitely still where the lean is.

The Grizzlies are 40-15 ATS in their last 55 games following a straight-up loss of more than 10 points. Find more NBA betting trends for Grizzlies vs. Warriors. 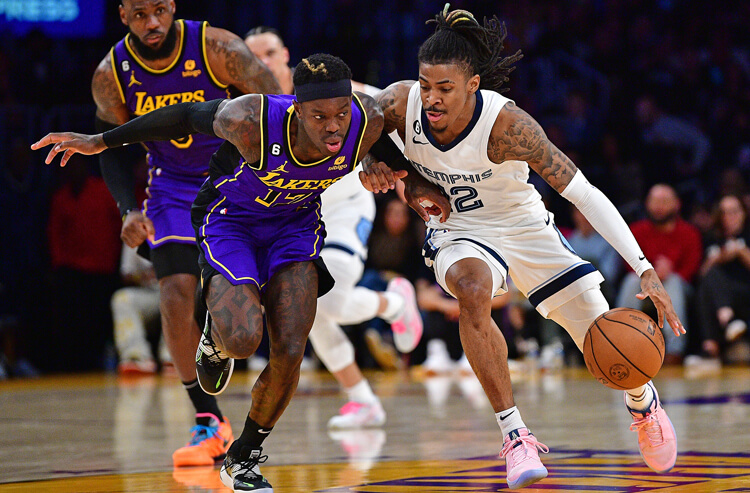