Steph Curry is favored to win his first NBA Finals MVP this June, but he'll have to get past Marcus Smart and the Celtics' hellacious D to accomplish the feat. Discover why we expect Steph to struggle at times in Game 1.

It might be time for Steph Curry to build a bigger mantle. The Golden State Warriors guard brought home a shiny new prize on May 26 when he became the inaugural recipient of the Magic Johnson Trophy as the most valuable player of the Western Conference Finals, leading his team back to the NBA Finals. It was just the latest plaudit for the eight-time All-Star, who has also won two regular-season MVP awards, one All-Star Game MVP award, and a pair of scoring championships.

Curry will begin his pursuit for another, more valuable trophy on Thursday, when the Warriors host the Boston Celtics in Game 1 of the 2022 NBA Finals. It’s Steph’s sixth trip to the league’s championship round in eight years, and his +110 NBA Finals MVP odds are the shortest of any player who will grace the court.

Golden State is favored to win Game 1 — and the series — in large part due to Curry, as the 34-year-old continues to break the backs of rival defenses with his limitless range and unparalleled shotmaking.

We’ve examined Thursday night’s matchup closely, and have the three best free NBA picks, based on Steph Curry props, for Game 1 below.

B) Steph Curry to record a double-double BOOSTED to +550 at BetRivers! Claim Now

The last time Curry faced the Celtics was on March 16, and it’s safe to say it did not go well for the three-time NBA champion. Curry was held to just three points and left the game late in the second quarter when Marcus Smart made a lunging play for the ball and landed hard on his leg. Curry limped off the court and would miss the next 12 contests as he recovered from a sprained ligament in his left foot.

Steph came up limping after fighting for a loose ball pic.twitter.com/hOjIvE2f8k

Warriors head coach Steve Kerr called it a dirty play, but the reality is that it was the kind of hyper-aggressive, ball-to-the-wall effort that Smart specializes in. The 2022 Defensive Player of the Year is a relentless ballhawk who tirelessly hounds rival guards to the point of submission. It helps explain why Curry was so ineffective in the 13-plus minutes he played on March 16, and why he also shot just 8-for-21 in his previous outing against Boston on December 17.

Smart had a similar effect on the Heat in the Eastern Conference semifinals, limiting Kyle Lowry to 9.4 points per game, and Gabe Vincent to 8.7. Overall, Smart and the Celtics held opposing point guards to 22.2 points per game during the regular season, the eighth-stingiest mark in the league. Expect the same kind of ruthless intensity on Thursday as Boston forces Curry into another subpar shooting night.

Curry is the consensus greatest shooter of all time, but he’ll also be facing one of the staunchest defenses in recent memory when he takes the court in Game 1. The Celtics led the league with a Scrooge-like 106.2 defensive rating during the regular season, and that number has dropped to 105.1 in the playoffs as the pace has slowed and the intensity has ratcheted up.

The team’s tenacious D was especially evident in Game 7 against the Heat, as Boston held Miami to 17 points in the first quarter and limited Jimmy Butler & Co. to 20% shooting from beyond the arc overall.

That number may have been especially low, but the strategy that produced it has been consistent all season, as Boston has made a habit of chasing opponents off the 3-point line and funneling them to the basket. That’s a big reason why the Celtics allowed the eighth-fewest 3-pointers during the regular season (11.2) and have managed to lower that mark even further in the playoffs (9.8).

.@KendrickPerkins says Marcus Smart is going to be "the biggest X-factor in this series."

"He's going to be tied to Steph Curry's hip all series long!" pic.twitter.com/xTmgp721xL

Curry has gone Under Game 1’s projected total in nine of this year's 16 postseason games, including both of his last outings. Expect him to miss the mark again on Thursday.

Although Curry is best known for being a lights-out shooter, he’s also an extremely willing distributor, capable of eviscerating double teams with his superb vision and pinpoint passes. The long-time Warrior holds the franchise record for most career assists and has dished out eight dimes or more in each of his last three games, including 11 in Game 3 of the Western Conference Finals.

Curry is averaging 6.2 assists during the 2022 playoffs and it’s foolish to expect that number to suddenly dip in Game 1, especially as Smart and the Celtics actively try to limit his long-range shooting and turn him into a facilitator. It may not be as exciting to watch Steph pass up the rock as it is to see him hit 35-foot daggers, but it’s precisely what the Warriors will need to come away with a win on their home court. 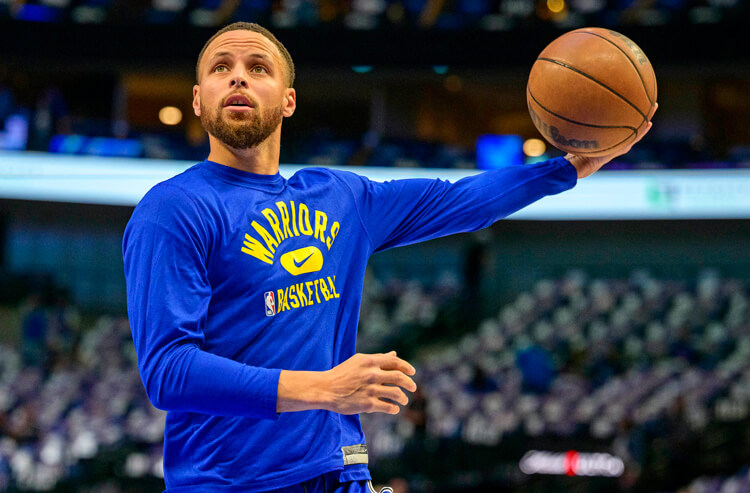