NASCAR's playoff push is on, with just eight divers still standing for the Cup Series championship. As the circuit rolls into Texas Motor Speedway this week, our Autotrader EchoPark Automotive 500 picks give you a full breakdown of your best bets, drivers

The NASCAR playoffs are rounding the bend, with just eight drivers left in the Cup Series championship running.

This weekend's Autotrader EchoPark Automotive 500 will be a huge variable in determining who advances, and NASCAR bettors will want to make the most of their wagers with the season winding down.

We're here to help steer your NASCAR betting with Covers Experts' Auto Racing Advisor preview and picks for the 2021 Autotrader EchoPark Automotive 500, which gets underway at 3:00 p.m. ET on Sunday, October 17.

I know not much translates well over from the All-Star race, but Larson did win that night and has looked his best on 1.5-mile tracks this season. Hard to overlook, especially since he’s coming off of a win last week.

Busch has four straight Top 10s at Texas and trends said he’d win last year. 10th to seventh to fourth to….first? He did. Five of his last six starts have seen him finish in the Top 10 in the Lone Star State to go along with a pair of Top 5s in his last three starts on the season too.

Blaney has a Top-12 finish in all but one Texas start. In fact, he has five Top 8s in his last seven tries. The only times that he didn’t hit that mark: he led 145 laps in spring race in 2019 before an engine problem and led 150 laps and sweeping both stages last July before a late-race fluke caution.

He’s had nine Top-10 finishes in his last 10 Texas starts.

He has a pair of fifth-place finishes in the last two fall races here.

He hasn’t had a Top 5 in each of his last six Texas starts.

He’s 0 for 6 in terms of Top 5s at Texas, including his last three finishes being 17th, 37th and 13th respectively.

Elliott hasn’t had the best of seasons on ovals. His wins are only on road courses, and we’re out of them now. He’s only had three Top 5s all year on 550 tracks. He was 13th, 32nd, 12th and 20th in his last four Texas starts. Can he turn it up now? Four of his six playoff finishes have been 12th or worse. Truex, meanwhile, has three Top 6s in his last four starts at Texas alone.

For the first time ever, Texas will lead off the Round of 8. Usually, this race was either the final race of the round or the penultimate one. What we do know is that we will be treated to a show on Sunday. In 2019, we saw 26 lead changes in both races at Texas. Last year, we saw a fluke winner in Austin Dillon in July and Kyle Busch earning his first win of the season in October. What happens now this weekend?

But, with Hendrick Motorsports taking up a lot of those spots, can they capitalize?

The thing is, only two HMS drivers are left as Championship-eligible. They’ll join all three cars from Team Penske and three of the four from Joe Gibbs Racing into the Round of 8. Four drivers in this round will advance to the Championship 4, while four go home.

Two of the three tracks this round are on 550 tracks and HMS appears to be the top organization on these types of circuits. These have also been among Penske’s worst.

The problem is, they have struggled at Texas in the past. Yes, they dominated the All-Star race, but was an entirely different package than we’re running this weekend.

Larson won in July here, but has just three Top 5s in his 13 Texas starts. He’s had six finishes of 23rd or worse. Elliott hasn’t had a Top 5 in any of his last eight Texas tries, including his last four finishes being 13th, 32nd, 12th and 20th respectively.

Their now-eliminated teammates William Byron and Alex Bowman haven’t fared much better. Byron is 0-for-6 for top fives at Texas with only one top 10 to his credit.  Bowman is the only one with recent success with a pair of top fives the last two years but he has no wins.

So, if they struggle, who’s there to pick it up?

That’s an interesting question in the sense you’d think JGR. They went 1-2-3 last year but have otherwise struggled at Texas.

Busch won this race last year and won back on another 1.5-mile track at Kansas earlier this season, which leads me to believe that while he’s skated by the first two rounds, the Round of 8 suits him well enough to get to the Championship 4.

Denny Hamlin has four finishes of 20th or worse in his last six and was ninth a year ago. Martin Truex Jr. has never won at Texas before and has only two Top 5s in his last eight, but one was a runner-up to Busch last fall. Christopher Bell was third last October too.

Still, Busch is their best bet with a Top 10 in all 10 races on 1.5-mile tracks this season, including seven of the last nine in the Top 5, and five of his last six in the Top 3 at that.

Hamlin is trying to go 3-for-3 in race wins for the first race of each round. He only has six Top 10s though on 550 tracks, but five of those were in the Top 5, including a win in Vegas. Truex Jr. has only three Top 5s in the same races with Bell not having a Top 5 on 1.5-mile tracks this season.

Texas has all the makings to shuffle up the playoff standings a bit.

So, who moves out of this round?

I think Busch wins Texas, Larson wins Kansas, and Hamlin victorious now in Martinsville. The fourth and final spot to Phoenix will go to Truex Jr.

In only two races in the stage era has a driver not won a stage and then the race itself. In fact, six of the last eight Texas races saw the eventual winner win or finish second in the second stage. 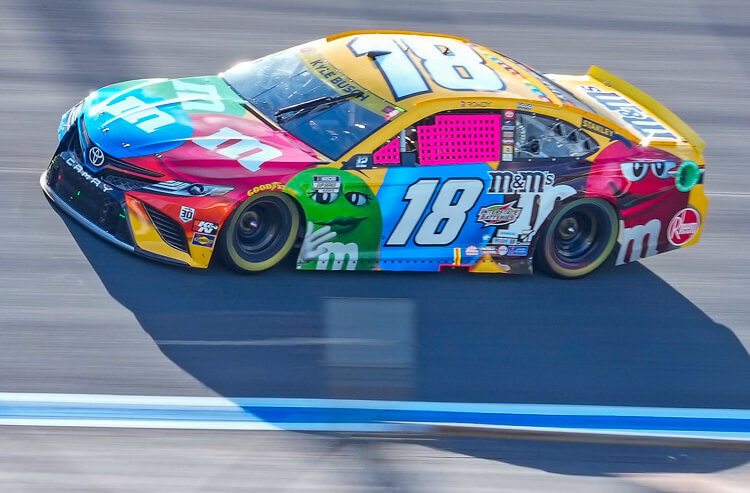 Autotrader EchoPark Automotive 500 Odds: Kyle Larson The Favorite Heading Into First Round of 8 Race
Jared Hochman | Oct 12, 2021
About Us
Contact Us
Careers
Our Team
Brand
Testimonials