Iowa’s bounce-back month came amid the start of the National Football League’s preseason and a handful of college football games that took place in August.

Sports betting in the Hawkeye State began to take flight again in August, although the books weren’t able to turn more handle into greater revenue.

The Iowa Racing and Gaming Commission reported on Monday that the state's online and retail sports-wagering handle increased by a healthy margin last month. Sports wagering was $108.4 million for August, the commission said, a 21.1-percent boost over the $89.5 million in action for July.

After paying out winners, revenue for Iowa sportsbooks was $6.6 million in August, down 14.3 percent from the $7.7 million that operators won in July. As a result, the hold for the books in August was approximately 6.1 percent, lower than July’s 8.6 percent.

Iowa’s bounce-back month came amid the National Football League’s preseason and a handful of college football games that took place in August. The stronger sports schedule in September, including the college football game played last weekend between the Iowa Hawkeyes and Iowa State Cyclones, could give the monthly handle another shot in the arm.

Most of the action in August in Iowa came from the internet, as the online handle was almost $96.1 million, or approximately 88.6 percent of all sports wagering for the month. The top online shop in the Hawkeye State last month was Caesars Sportsbook, where bettors placed $34.8 million in wagers.

Retail handle in Iowa for August was $12.35 million. The leading retail sportsbook for the month was the Penn National Gaming Inc.-owned Ameristar Casino Hotel in Omaha, NE.-adjacent Council Bluffs, which pulled approximately $3.6 million in bets.

(Note: The commission has also said American Wagering Inc. and its partner casinos submitted incorrect numbers for their July handle and revenue. Those official numbers have been corrected, which is why the numbers reported by Covers last month and now are different. American Wagering does business as Caesars Sportsbook in Iowa.) 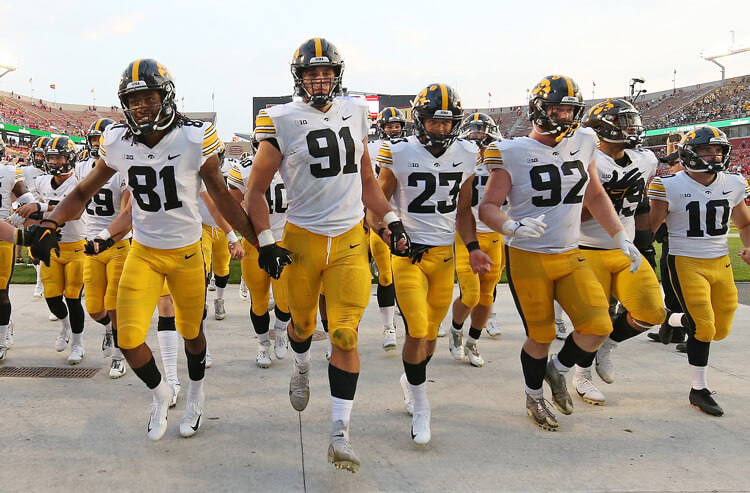