After a one-year dalliance with an autumn tee-off, Masters betting is back to where (and when) it belongs.

Augusta National will host the top golfers in the world for the first major of the 2021 calendar year, less than five months after the previous edition was played (having been delayed for most of the year due to the COVID-19 pandemic). And with five golfers carrying Masters odds between +800 and +1,200 – with a sizeable gulf between them and the rest of the field – it will be interesting to see where the betting money falls, especially on outright plays.

Here are the 18 Masters notes PGA bettors absolutely need to know heading into Thursday's opening round at the always-challenging Augusta National:

1. The Masters has seen 31 aces in tournament history. Three players – Shane Lowry, Davis Love III and Louis Oosthuizen – aced the 16th hole in 2016, and Matt Kuchar repeated the feat in 2017. We saw three more aces over the next two years, including two in 2019. In fact, more than half of the tournament's 31 holes-in-one have come since 2003. Oddsmakers believe that trend will continue in 2021, offering -150 odds on someone converting an ace. Think it won't happen? Take the goose-egg at +120.

2. American golf fans haven't experienced a true Masters title drought in quite some time. It has been nearly three decades since the United States has gone more than two years without a victory at Augusta, when Sandy Lyle, Nick Faldo (2x) and Ian Woosnam helped the United Kingdom claim four consecutive titles. The U.S. has won the past three Masters titles and remains the favorite region to do so this year at -165. Europe is a distant second at +235, with the rest of the world listed at +520.

3. There are four golfers bunched together in the race for the low American in this tournament. Dustin Johnson leads the way, installed at +650 to finish best among his compatriots. Bryson DeChambeau is a close second at +750 while Justin Thomas and Jordan Spieth are tied for third at +800. And don't count out next-tier stalwart Xander Schauffele (+1,200), who has seven Top-6 finishes in major tourneys (including a T2 at the 2019 Masters) and ranked third on tour in SG: Total last year.

4. The odds are a little more lopsided on the low Irish player, a prop for which Rory McIlroy is an overwhelming favorite at -350. And with good reason: McIlroy has eight consecutive Top-25 results at the tournament, highlighted by a stretch of five consecutive Top-10 finishes from 2014-18 and a fifth-place showing last year. Shane Lowry (+250) is the only Irishman with a hope of keeping pace with McIlroy, but he has missed three cuts in five trips to Augusta National over his career.

5. Margin of victory could be a popular Masters prop this week – and might very well be one of the more difficult props to handicap, given recent tournament history. At the last 10 Masters, we've seen three playoff wins, two one-shot victories, a two-shot triumph, two three-shot wins, a four-shot victory and last year's five-shot rout by Johnson. Bettors are getting +250 odds on the Masters producing a one-shot victory, and +300 on the tournament being decided by two shots.

8. A quick start doesn't always mean Masters success, but it couldn't hurt to come out of the gate strong. And a couple of guys in the second tier of tournament contenders lead the way when it comes to Round 1 scoring average. Patrick Cantlay (+2,200 outright) is at the top of the heap with a first-round scoring mark of 68.10, while Patrick Reed (+3,000 outright) is right behind at 68.22. Consider betting on either Cantlay at +2,900 or Reed at +3,700 to lead after Round 1 at Augusta.

9. Low first-rounds are nice, but it's not how you start—it's how you finish (you totally knew how that sentence was going to end). And that might make Tyrrell Hatton an intriguing play this weekend: The Englishman enters as a +4,700 outright play, and has the lowest fourth-round scoring average on Tour (67.83) of any player with a minimum of five rounds played. Hatton is one of the best players in the world when he's dialed in and if he's within shouting distance of the lead entering Sunday...watch out.

10. Let's stick with final-round scoring, this time to identify potential outright bets to fade. And we're aiming this one right at you, Lee Westwood. While the 47-year-old has a pair of runner-up Masters finishes on his resume, he simply can't be trusted at the 2021 edition of the tournament. Westwood ranks outside the Top 200 in Round 4 scoring average (73.40), with finishes of 73 at the Arnold Palmer Championship and 72 at The Players Championship costing him victories in both tournaments. Stay away.

11. We miss you, Tiger—and we miss writing multiple Masters notes about you. As Tiger continues recovering from a near-fatal car accident, we'll turn our focus instead to one of his most storied rivals, Phil Mickelson. And Lefty is staring at incredibly long odds at Augusta, listed at +16,000 to win outright. Lefty has 15 Top-10 results at Augusta, including three straight wins, but it's been six years since he placed inside the Top 10, which might explain why he's a +1,100 longshot to do so this week.

12. There might, however, be some value in a different Mickelson finishing position prop. While his best days are clearly in the rearview, Mickelson isn't exactly washed. Prior to a missed cut at the Valero Texas Open (thanks largely to a 10 on the par-5 18th in his opening round), he posted a T35 at the Players Championship and a T25 at the Honda Classic. We're not picking Lefty to make a run at Augusta, but given his extensive history at that course, his Top-40 prop seems reasonable at +125.

13. Let's lock in a Top-10 prop bet here. Rahm is the guy to target at +115, having led the PGA Tour with seven Top-10 finishes so far this season (no other player has more than five). That incredible stretch includes a T7 at last year's Masters—his third consecutive Top-10 result at Augusta. Add in the fact that Rahm has five Top-10 showings in his previous 11 major tournaments, and Rahm looks like one of the safest Top-10 plays in this week's Masters field.

14. Remember that earlier reference to margin of victory? The Masters has seen more than its share of playoffs, and not just in recent years. Augusta National has been home to 17 playoffs over the course of its 84-year history, including six so far in the 2000s. The longest gap between playoffs: 12 tournaments, between Nick Faldo's second straight triumph in 1990 and Canadian Mike Weir's unlikely victory in 2003. Bettors are getting +300 odds of a playoff in 2020, or -500 for no playoff this year.

16. Going low at Augusta is predictably difficult, as evidenced by the fact that only two golfers have ever shot 63 there. Nick Price established the course record in 1986 with a sizzling 63 in his third round – he went on to finish fifth that year – while Greg Norman was on fire in 1996 (at least in the early going) as he opened with a score of 63. Bettors are getting -200 for the best round of this year's tournament coming in at 65.5 or lower, compared to +150 for 65.5 or higher.

17. We usually like to wrap up with the straight forecasts, but we're getting them to you one item early this time around. There are some interesting forecast props as usual: Here are some of our favorites based on the combination of overall talent level, recent form and historical success at Augusta National: Johnson over McIlroy (+15,000), Johnson over Koepka (+20,000), McIlroy over Schauffele (+35,000), Koepka over Thomas (+27,500), Rahm over McIlroy (+20,000) and Schauffele over Koepka (+50,000).

18. It seems fitting to finish with putting, as this tournament – like most majors – will come down to which golfers excel most with the flat stick. Augusta's greens are notoriously brutal and have been known to ruin a golfer's chances in a matter of minutes (paging Ernie Els). Staying away from three-putts is critical, so consider golfers whose three-putt avoidance is elite. And the lowest three-putt rate of any player in the field: Mackenzie Hughes (+20,000), who is at a minuscule 1.52 percent. 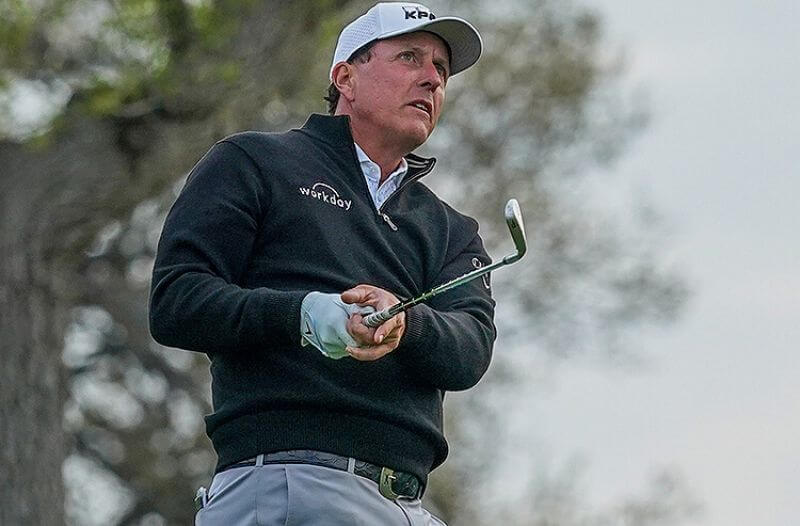