Two weeks into the season, XFL betting odds have generated plenty of social media buzz and even articles in mainstream publications, well beyond sports gambling Twitter and such. It certainly doesn’t hurt that the lines and totals are displayed on TV in the score bugs, and that announcers are working in more betting references.

But who, exactly, is making picks on the 2020 version of the XFL?

It’s fair to say that XFL handle ranges from nominal to extremely nominal, depending on the sportsbook. With that in mind, it’s reasonable to conclude the 2020 XFL is primarily a sharp player’s market.

Perhaps surprisingly, that conclusion is only partly correct. Among three operators Covers spoke with, only Circa Sports – the newest player in Las Vegas after launching last June – stated that the Pros outnumber the Joes.

“Most of our XFL handle has been sharp,” Circa sportsbook manager Chris Bennett said, while reminding that it’s still very early, with Week 3’s four-game slate coming Saturday and Sunday. “I think it’s difficult to make too many definitive conclusions based on the first two weeks of the league’s existence. We have had some interest from recreational players on a few games.”

Although the majority of Circa’s XFL action has been sharp, Week 2 handle was double that of Week 1, while elsewhere, handle was flat or down from Week 1 to Week 2. The first XFL proposition bet – Vipers quarterback Quinton Flowers total passing yards, Over/Under 69.5 at Seattle in Week 2 – also played a role in the increase, with one known sharp player tweeting out that he max bet at Circa, presumably on the Under. Bennett added that Circa was first to market with Weeks 2 and 3 odds, inviting more sharp play, as well.

However, at CG Technology, which operates several sportsbooks on or near the Vegas Strip, the smart bettors haven’t really taken a shine to the XFL.

“So far with us, the sharper players have taken a mostly wait-and-see approach,” CG risk analyst Dave Sharapan said. “They are either tipping their toes in the water, or they see a number that’s different and play it. No real opinions or originators yet. More recreational players than anything so far.”

And the public support is modest at best.

“So far, not that much,” Sharapan said. “It’s die-hard football fans or people in the book.”

Likewise across the country at PointsBet USA, where the mobile-only operation in New Jersey said there’s been strong carryover from the NFL to the XFL, but the sharp players aren’t that interested.

With that public uptick, Week 2 numbers managed to keep up with Week 1. However, as Chaprales alluded to, in-play was a key reason Week 2 handle was comparable.

“We’ve seen a strong interest on the in-play front for XFL,” Chaprales said. “Opposite to NFL betting, in the small sample size thus far, we’ve seen that an XFL game garners more in-play and less pregame, while NFL takes more pregame and less in-play. It’s probably the result of there being so many unknowns surrounding the XFL, i.e. players, coaches, offensive schemes, the quirky (extra-point) rules, etc.”

At most books, XFL limits are far lower than on NFL and college football. For example, at Circa, limits are $2,000 on sides, $1,000 on totals and $1,000 on moneylines. And to reiterate, the handle is nominal at best. CG Tech’s Sharapan had to think on it to come up with a reasonable market comparison.

“We do minimal Canadian Football League action, period, and mostly sharp action exclusively with the WNBA,” Sharapan said. “As far as markets to compare it to, I would say it feels more like NFL preseason. And there has already been a drop-off from Week 1 to Week 2. I think if the games get better or more competitive, the handle could increase.”

Sharapan added that handle on an individual XFL game is less than a college basketball game featuring at least one decent top-25 team – for example, last Sunday’s San Diego State-Boise State game – and far less than an NBA game, the two primary competitors for sports betting dollars this time of year. Chaprales echoed that sentiment, stating handle on individual XFL games has mirrored that of college basketball and NBA games of similar profiles. Bennett made an apples-to-apples comparison within the same sport.

“I think the level of interest could align with middle- to lower-tier conference college football – Wyoming vs. Louisiana Tech, if you will,” Bennett said, while outlining what he sees as the revived league’s pressing issues. “I think the league’s biggest problem is the fact that all the quarterbacks are fourth-string NFL talent, so it’s minor league football. They should also get some younger/fresher coaches. I don’t think people care about the name recognition of coaches that were in the NFL and college football 20 years ago.”

XFL observers are rightly comparing the league’s early returns to last year’s Alliance of American Football, an experiment that went belly-up after just two months. The XFL appears to have better financial footing and more betting interest, but the on-field product has fallen far short of riveting. The Under hit in six of the first eight games, including four in which 27 points or less were scored.

If the football product isn’t good, the betting market won’t be, either.

“I honestly don’t know how viable the market is going to be. It feels like the great unknown right now,” Sharapan said. “I think the product has to get better for people to bet on it. It’s a good thing that the XFL is embracing the betting aspect of it, and they have the games on TV, which is extremely important. But it is not going to be popular just because you can bet on it.

“Hopefully, the competition gets better, the players become more familiar, and the handle will increase. Anything that increases handle in a slower time like now is a good thing for sportsbooks.” 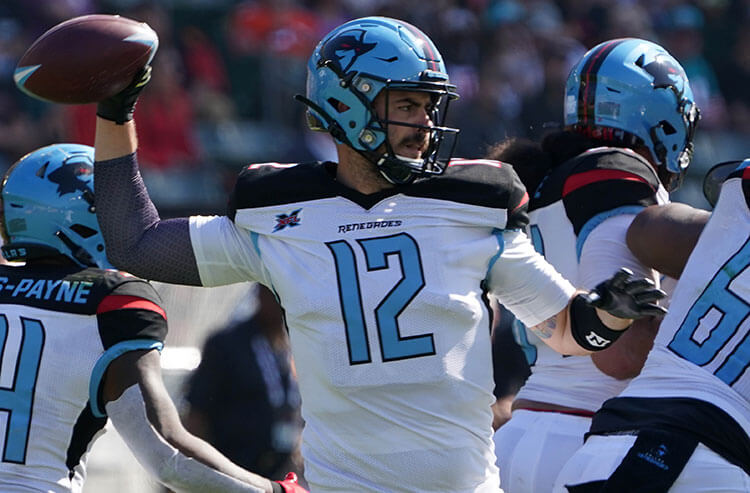