Now that you can gamble in almost every state in the country, casino customers in Las Vegas are looking for something different.

Marc Meltzer
Last Updated: Jan 22, 2017 5:52 AM ET
In this day and age, most businesses don’t simply operate on a gut feeling. Sure, they need intuition in order to be successful but they use data to support why they’re making decisions. We see data supporting decisions in the sports world all of the time. Baseball might have been first using data and analytics, but every professional sport now uses whatever information they can find.

Las Vegas casino operators have been using analytics for years, just like all big corporations. It isn’t too difficult to understand why casinos operate the way they do. Every year the state releases revenue information for Nevada casinos and, on a macro level, the casinos aren’t reinventing the wheel. They’re following consumer trends and offering better products where the consumers are spending money.

Let's take a look at how casinos are generating revenues and why they continue to post profits.

Gambling revenue means a little more to the casinos in downtown Las Vegas than the Vegas Strip today. You'll see downtown Las Vegas casinos promoting 3:2 blackjack and 10x odds on craps. Meanwhile, you see casinos on the Vegas Strip focusing their marketing efforts elsewhere. Not only are operations on the Strip  looking elsewhere for revenue, they're trying to squeeze gambling customers for every penny they can. Most casinos on the Vegas Strip now only offer 6:5 blackjack under $25 while some increased the house edge in craps and roulette.

There’s a reason for the different focus. Revenue from hotel rooms now generates 28.12 percent of the revenue for Vegas Strip casino operators. That’s up from 16.10 percent of revenue in 1984. On an earnings call last year, Caesars Entertainment said that hotel room renovations were the easiest way to generate revenue. A new room product brings in more money than an old hotel room.

It almost makes too much sense. Now that you can gamble in almost every state in the country, casino customers are looking for something different. Visitors to Las Vegas are more focused on a nice overall experience than just a place to gamble. The Vegas Strip isn't the only part of Las Vegas seeing this.

Hotel rooms in downtown Las Vegas are still inexpensive compared to the Vegas Strip but, on average, they increased from $129.99 in 2015 to $138.48 in 2016. That's a $9 increase per hotel room on average. Occupancy also increased to 87.46 percent. It wouldn't be a surprise to see hotel rooms continue to increase as visitation to Las Vegas continues to increase.

Other Casino Revenue In Las Vegas

We are seeing an increased focus on food and beverage on the Vegas Strip but the percentage of revenue they generate aren’t as incrementally large. Revenue from food went from 11.41 percent in 1984 to 15.98 percent in 2016. That’s a nice increase but not as dramatic as you might think from the number of new restaurants charging a premium price because of their Vegas Strip location.

More surprising is that the revenue generated by beverage sales (booze) accounted for 7.17 percent of casino revenue last year. That number has fallen from 7.71 percent in 1984. That’s actually a smaller percentage of revenue than any year since 2010 when beverage sales represented 6.86 percent of revenue.

Maybe the dog is wagging the tail in the wrong direction on the Vegas Strip. If bars and restaurants generate more revenue for casinos where will it come from? There's only so much lower gambling revenue can go before the Vegas Strip becomes just another place to visit.

Even though the flashy bars and restaurants in Las Vegas are on the Vegas Strip, downtown Vegas is sort of killing it in this area. Food and beverage revenue have increased by approximately 50 percent and 100 percent, respectively since 1984.

There's something to be said for knowing your customer. Perhaps paying $5 for a beer instead of $8, or $10 for a burger instead of $15 might be a reason people are spending more money on Food and Beverage in downtown Las Vegas casinos. 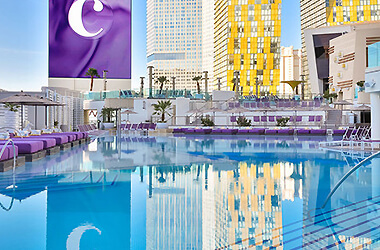