USFL Week 6 Odds, Picks, and Predictions: Generals are a Safe Gamble Against Houston

The USFL regular season is into its second half, and the contenders are separating themselves, including the New Jersey Generals, who have a great spot this weekend against Houston. Find out why they're among our best USFL Week 6 picks.

Week 6 of the USFL kicks off this weekend. Two games are scheduled for Saturday, with two more to follow on Sunday.

The undefeated Birmingham Stallions have established themselves as the USFL championship favorites after a perfect 5-0 start in front of their home crowd. Will they be able to keep the streak alive and make it 6-0?

The New Jersey Generals are surging and have arguably the most impressive resume from a statistical standpoint. Will they be able to keep building in Week 6?

Check out our picks and predictions for USFL Week 6 to find out.

If you're signing up for a new sportsbook for the USFL, here are two of the best bonuses* available:

The Bandits (3-2) and Stars (2-3) have both struggled to find consistency at this point in the season.

The Bandits are installed as three-point favorites despite possessing a brutal statistical profile. Tampa Bay is dead-last offensively with only 247 ypg and ranks sixth defensively, allowing 319.2 total yards per game.

Jordan Ta’amu is a plus at the quarterback position and is probably the most-known name in the USFL. That said, the passing game has been atrocious, averaging only 5.5 yards per attempt. The Stars have a major deficiency stopping the run, ranking dead last in rush defense while allowing 60 more yards than any other team. The Bandits have the second-worst rushing attack (90.8 ypg) in the league and it's to be determined if they can exploit the Stars' weakness.

One thing the Stars do well under Bart Andrus is throw the ball, ranking second in the league with 204.8 ypg. It hasn’t mattered much if Bryan Scott or Case Cookus has been playing — this team will throw it all over the yard. The Bandits have a hole in the secondary, allowing the second-most passing ypg (205.2) in the league.

The Stars should be able to move the ball against an exploitable Bandits secondary. The Bandits do not have a strong profile and shouldn’t be field-goal favorites in this spot. This game is more of a coin flip and therefore I see value on the Stars’ moneyline and against the spread.

Jeff Fisher appears to be on a mission to be the all-time losingest coach in both the NFL and USFL. His Panthers (1-4) team’s only win came against the Maulers, who didn’t pick up their first win until a week ago.

The hometown Stallions (5-0), meanwhile, are the only undefeated team in the league. All regular-season games are played in the city of Birmingham, meaning Skip Holtz’s squad is the only one in the league with a home-field advantage.

That being said, I’m under the belief that this Stallions team may be receiving a bit too much love. If it’s a dominant, undefeated squad with a huge home-field advantage, why is the spread under a touchdown against a 1-4 Panthers team?

Michigan, surprisingly, has a pretty good statistical profile, ranking fourth offensively (313.2 ypg) and first defensively (244.8 ypg). The Panthers play sound defense and appear to have found what’s working offensively — the rushing attack. They now rank second in the league with 169.6 yards per game on the ground, well ahead of the third-place Stallions (128.6 ypg). Reggie Corbin has taken over the starting running back role with gusto, averaging 6.4 yards per attempt — best in the league.

This is too many points. Backward hat Jeff Fisher gets our bet.

Kirby Wilson’s Maulers (1-4) team finally got its first win in Week 5 with a 21-20 defeat of Houston. The primary issue has been a woeful offense averaging just 4.9 yards per pass attempt and 3.6 yards per rush.

Wilson made a change at quarterback in Week 5 and it paid immediate dividends, as Vad Lee completed 19 of 32 pass attempts for 170 yards, two touchdowns, and one interception. He also rushed for 20 yards. Those numbers aren’t overwhelming, but it’s an improvement considering the Maulers’ previous starters were struggling to complete 50% of their passes while averaging less than 5.0 yards per attempt.

The Breakers have the league’s top passing attack, led by passing yards leader Kyle Sloter. The aerial assault offensive gets all the love, but I believe the defense is just as important. New Orleans has the third-best defense in the league and should be able to render the Maulers useless offensively — a recurring theme for Pittsburgh’s stuck-in-mud attack.

For as bad as the Maulers are offensively, the defense isn’t so abysmal — it ranks fifth in total yardage allowed (292 ypg) despite being on the field most of the game.

I envision the Breakers building a lead and then attempting to sit on it. They have the defense to make this one ugly, which is no difficult task against the Maulers.

I mentioned in last week’s column that I believed the Generals (4-1) were being undervalued in the betting market and by the public at large heading into their matchup against the Breakers. The Generals took care of business with a 27-17 in what was arguably the most anticipated matchup on the board in Week 5. It was a statement win for Mike Riley’s squad — they’ve firmly announced that they’re contenders as we hit the stretch run of the regular season.

Things haven’t been so rosy for Kevin Sumlin’s Gamblers. A heartbreaking 21-20 loss in Week 5 to Kirby Wilson’s previously-winless Maulers team was a bottoming-out moment. Houston is now in a three-way tie with the Panthers and Maulers among the league’s basement.

To put it bluntly, the Gamblers don’t do anything well. Houston, we have a problem! The offense ranks sixth (260.8 ypg) while the defense is allowing 20 more yards per game than the next-worst team (380.8 ypg).

The Generals have been dominant in the trenches. They have both the top rushing offense (180.2 ypg) and rushing defense (76.6 ypg allowed) by a significant margin. This is a clear recipe for success and one that should continue to intensify now that dual-threat De’Andre Johnson is receiving a full workload at quarterback.

I like the Generals to take care of business and shut down this Gamblers offense. Once team total props are released, I wouldn’t mind a play on Houston’s TT Under. I like the full game Under as well due to what I perceive as a huge mismatch in the trenches, which should allow the Generals to dominate the flow of this game. Houston doesn’t have much of a passing game to rely on if New Jersey shuts down the running game as anticipated. For the best bet, I’m taking the Generals to roll ATS against Kevin Sumlin’s woeful team.

Use our USFL parlay calculator to create your own parlays and see their potential payouts. 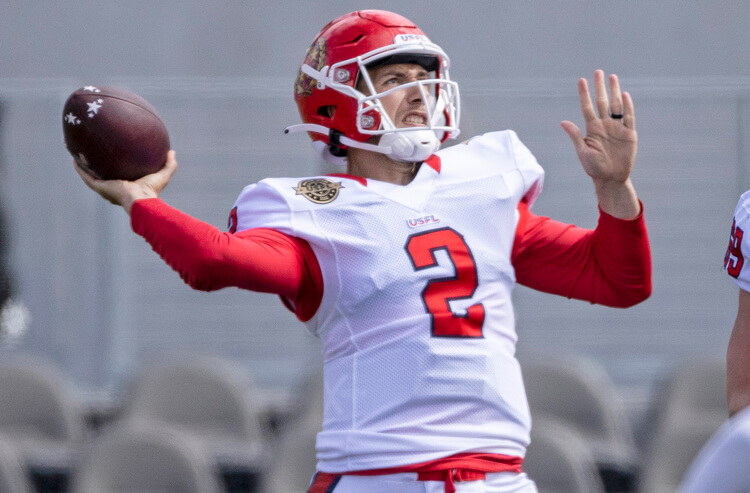 USFL Week 6 Odds, Picks, and Predictions: Generals are a Safe Gamble Against Houston
Provided by