Jonjo Shelvey and Newcastle United have been in dreadful form recently, with relegation becoming more likely.

The English Premier League returns from the international break with little drama at the top of the table but several intriguing races ready to resume.

Manchester City will coast to the title as they enter Matchday 30 with a whopping 14-point advantage over second-place Manchester United. Yet, while the battle for top spot is all but over, there's plenty at stake for the rest of the Premier League elite, with second place up for grabs and the final two Champions League berths also still in doubt.

Here are our top Premier League betting plays for Matchday 30.

Saturday kicks off a bittersweet stretch for the table leaders, who begin their Sergio Aguero farewell tour with an away date with third-place Leicester City. Aguero has announced he will not be returning to the club at season's end, drawing to a close a truly incredible run during which Aguero has scored 181 goals in 271 league matches for Man City.

It might seem like folly to bet against the visitors at first glance, but with City having all but secured the league crown while still in the hunt for three other trophies – including the coveted UEFA Champions League – you could envision a scenario in which this club gets creative with energy conservation. And that makes Leicester a terrific option for a home upset.

The end of this latest international break signals the time for the Premier League's elite to get serious – and Tottenham would be wise to do just that as they visit Newcastle on Sunday. Spurs resume league action on the outside of the automatic postseason cutoff, one point back of the league's Europa League berth and three behind the pace of the final Champions League spot.

While it would certainly help to know whether sensational forward Son Heung-min will return from a hamstring injury suffered prior to the break, Spurs might not even need him. Newcastle have just two victories from their previous 18 league matches, and not even an undermanned Tottenham squad should have trouble pulling out a multi-goal triumph here.

A two-game losing streak in league competition has dropped Everton further back of the pack in the race for a European place – but better days might be ahead, starting with Monday's meeting with visiting Crystal Palace. Everton sit eighth in the table – three points back of fifth-place West Ham – but are -125 favorites against a Crystal Palace side (+400) languishing in 12th.

All eyes will be on Everton striker Dominic Calvert-Lewin, who ranks among the league leaders with 14 goals and has been a thorn in Palace's side of late. Calvert-Lewin has scored in the previous two meetings between the teams, both resulting in Everton victories – and at a bettor-friendly price to repeat the feat Monday, we recommend leaning on this player prop. 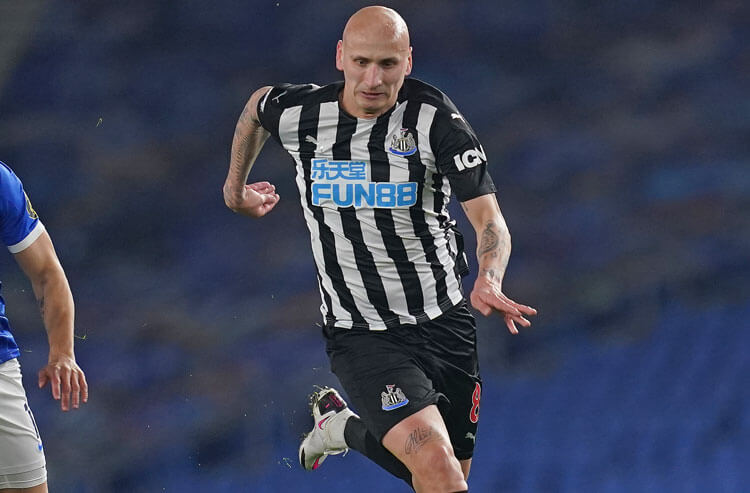