Lightning vs Hurricanes Game 5 Picks and Predictions: Storming Back?

The Lightning and Hurricanes let a storm of goals loose Saturday, but we're expecting things to calm down for NHL betting in Game 5. Find out why as we break down our Lightning vs. Hurricanes picks and predictions.

The Tampa Bay Lightning will try to close out their second-round playoff series against the Carolina Hurricanes on Tuesday night.

The Bolts are up 3-1 in this best-of-seven series and NHL betting lines have them installed as slim -120 road favorites for Game 5 at PNC Arena in Raleigh, North Carolina.

Can Rod Brind'Amour and the Canes keep their Stanley Cup dreams alive with a win? We let you know what we think with our best free Lightning vs. Hurricanes picks and predictions for Tuesday, June 8.

The Under is 11-2-1 in the last 14 meetings between these division rivals. Find more NHL betting trends for Lightning vs. Hurricanes.

All of the games in this series have been close, with the first three contests all being decided by a single goal and the road team winning each time.

Game 4 was the first game decided by multiple goals and it was a bit of a wild one with the Lightning opening the scoring in the first period before the Hurricanes stormed back to take a 4-2 lead midway through the second. That was followed by four unanswered goals by the Bolts, which iced the game.

The big difference-maker in the last two games has been Tampa Bay's powerplay, which has gone 5 for 9 with the man-advantage. While the Bolts have a very good powerplay, that sort of efficiency simply isn't sustainable especially against a team like the Hurricanes, which had the third-best penalty kill percentage in the league during the regular season.

The Lightning are the defending Cup champions for good reason, they have a highly explosive offense, a strong defense, and one of the best goalies in the league in Andrei Vasilevskiy.

That said, the Hurricanes finished with the slightly better record during the regular season and were an analytics darling, dominating puck possession, excelling on special teams, and winning faceoffs at a much higher rate than Tampa Bay.

It was frankly a bit surprising to see the Canes drop two games in a row at home to begin this series. After all, they were virtually unbeatable at PNC Arena during the regular season, going 20-3-5, and Vasilevskiy didn't have quite as much success on the road.

With the Hurricanes facing elimination at home, look for them to bounce back with a big win and extend what has been a terrific series.

We saw a high-scoring Game 4 but that was due to a ridiculous second period, which saw both teams combine for a whopping eight goals on 21 shots. Nonetheless, when the final horn blew, both teams had totaled a meager 51 shots, so the flurry of goals seems like a big outlier.

For the most part, this series has been a low-scoring battle featuring some terrific goaltending and solid defensive play. Vasilevskiy is one of the best in the business and has been recently named a Vezina Trophy finalist for the fourth straight season.

The Canes feature some excellent netminding of their own, allowing just 2.39 goals per game during the regular season. Although Carolina goalie Petr Mrazek might be a bit shell-shocked after allowing six goals on 26 shots on Saturday, the Canes have the luxury of replacing him with rookie Alex Nedeljkovic, who might be even better.

Nedeljkovic went 15-5-3 with a 1.90 GAA and a .932 save percentage during the regular season and limited the Lightning to a pair of goals in each of the first two games of this series.

Keep in mind that even with 10 goals scored in Saturday's contest, these teams have gone 11-2-1 to the Under in their last 14 games head-to-head. Take the Under.

Did you know that if you parlayed today’s NHL Lightning vs. Hurricanes picks, you could win $26 on a $10 bet? 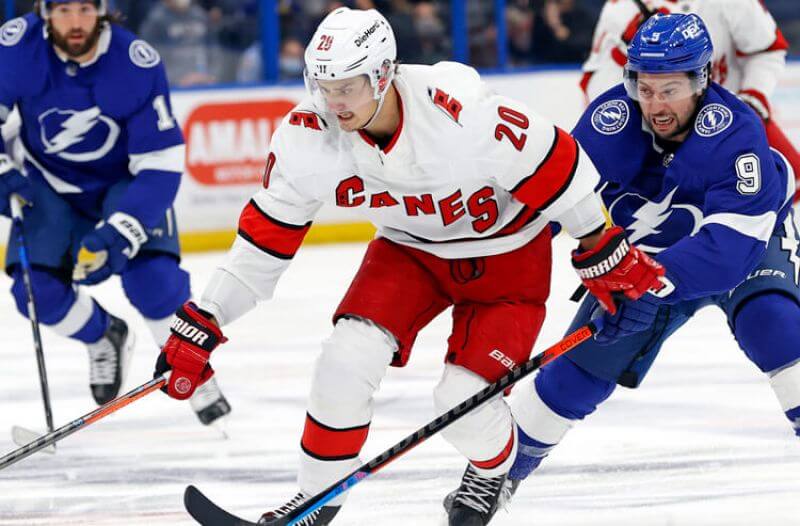 Lightning vs Hurricanes Game 5 Picks and Predictions: Storming Back?
Provided by

Lightning vs Islanders Game 4 Picks and Predictions: Back In It
Josh Inglis | Jun 18, 2021