The wait is over for college football bettors as The Golden Nugget in Las Vegas released betting lines and odds for the top 100 NCAA games of the upcoming season. Patrick Everson chats with Tony Miller and Aaron Kessler, sportsbook directors at the Golden Nugget, while tracking some early action and line changes.

As much as skyrocketing temperatures are part of the Las Vegas summer, so too are the college football Games of the Year at the Golden Nugget. Since 2007, Tony Miller and Aaron Kessler put themselves out on a limb a couple months ahead of the season, as opportunistic bettors get a fix for their football-betting jones.

After a two-year hiatus, the Nugget was back at it Thursday afternoon on Fremont Street. Several sharp bettors lined up at the counter anticipating the noon release as the downtown Las Vegas sportsbook rolled out 100 games dotting the landscape throughout the season.

“As far as we’re concerned, it’s the first day of football,” Miller said, noting he was thrilled to have the Games of the Year offerings back on his board after a break from being among the first to post the matchups. “It’s a three-month project. It’s a lot of work to do.”

In recent years, Miller and Kessler have brought in The Gold Sheet’s Bruce Marshall to help shoulder the load as they select the games, debate the lines and get them up on the board. Miller said as the process rolled along this year with teams seeming to separate into three tiers.

“It’s a two-headed beast this year between Alabama and Clemson,” Miller said of the unsurprising top two. “But it was hard for us with teams rated No. 3 through 15. All those teams are very close. Any one of those teams could be College Football Playoff contenders. After that, there’s another group that we don’t think have a chance of even cracking the top 10.”

There’s always plenty of debate on power rankings and subsequent pointspreads. This year, two teams created a chasm that Miller and Kessler struggled to bridge: Texas and Nebraska.

“We had difficulty with those two because we were so far apart,” Miller said. “I’m high on both those teams. I think they have a legitimate shot of being in the top four. Aaron disagrees with me on that, so our numbers were very different – we’re talking double digits. That’s where Bruce was a big help.”

Once those differences were settled, bettors found a few spots they really liked, as the Golden Nugget took several max plays of $1,000 right out of the gate. One game several professional players liked was Utah at Washington on Nov. 6, with the Utes opening as 8-point road underdogs. That line quickly adjusted down to 5.5.

“I have those two teams ranked within a point of each other,” Bryan Leonard said after being the first in line to wager and immediately jumping on the Utes. “Utah got beat by Washington twice last year, because they met in the Pac-12 championship game. So you’ve got the double-revenge factor, and it’s gonna be a low-scoring game, because both teams are good defensively. So catching over 7 points, I think that’s a good line.”

Auburn-Louisiana State on Oct. 26 was another sizable mover, with visiting Auburn bet from 9.5-point pups down to 6.5.

The Army-Navy clash also got significant attention, with the Black Knights opening -13 in the Dec. 14 neutral-site game at Philadelphia, but money pouring in for the Midshipmen as the line tightened to 8.5.

“Army-Navy is always a little tricky,” Kessler said. “You don’t have a set of numbers work off of, and there’s always a lot of turnover. Those rosters turn over a lot more at the service academies.”

Joey Fortuna, who makes an annual sojourn from New Jersey to get some action on these Games of the Year, termed Oklahoma State his “stone-cold lock” as 10-point ‘dogs at Texas on Sept. 21. That line dipped a point to 9 thanks to early money. While that game is in the first month of the season, Fortuna said bettors should really take a good look at later matchups.

“There’s value in a lot of these games, but especially the later-date games, in October and November,” Fortuna said. “You could see 10-point differences between now and kickoff.”

Miller said he expects the Big Ten and Big 12 matchups to be among the most popular on the board.

“Especially the Big 12. We used every team in the conference except Kansas,” Miller said. “We think that’s going to be a very competitive conference. You’re gonna see a lot of tight games.”

Oklahoma-Texas is usually the biggest clash of the Big 12 bunch, but it didn’t faze early bettors Thursday. The Sooners opened -6.5 at the neutral-site game in Dallas on Oct. 12, and the line didn't move after the first couple of hours of betting. 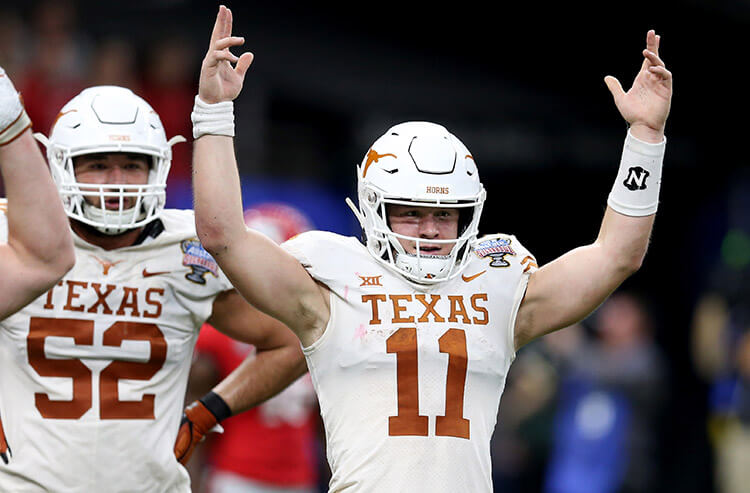