“We’ve got TCU -6. That might be the game of the year this season. I think TCU and Ohio State are the two favorites to be in the national championship game.” - Tony Miller, Golden Nugget.

Patrick Everson
Last Updated: Jun 26, 2015 9:14 AM ET
Photo By - USA Today Images
This afternoon, dozens of bettors are descending on downtown Las Vegas, ready to be among the first to get down on the Golden Nugget’s annual College Football “Games of the Year”. If you think that Nugget sportsbook director Tony Miller, his trusty sidekick Aaron Kessler and The Gold Sheet executive editor Bruce Marshall just threw all this together in the last 24 hours, well, think again.

Because much like a fine wine, these games have been marinating in their minds for months. It’s an extraordinary amount of tedious work and thought. Or at least it is for Miller and Kessler. Somehow, Marshall – who was brought into the fold before the 2011 season – has found a level of pleasure in the process that eludes his partners.

“I have a lot of fun with this, but keep in mind that my favorite TV show is ‘BBQ Pitmasters,’” Marshall told Covers.

Well, that might just explain his zeal for the arduous process.  Miller said he put forth the games – numbering 166 for the 2015 season – a few months ago, and ever since then, the three have been independently studying up on all the teams and all the matchups. “I say, ‘Here’s the games we're using,’” Miller said. “Weeks go by, and we don’t even talk about it.”

They got back together Thursday to hash out their final opinions and set the pointspread for all 166 contests.

This is the ninth year the Golden Nugget has broken up the summer betting doldrums with its Games of the Year, and Miller has been pleased with the evolution, particularly since Marshall joined in.

“When Bruce came on, he really helped us a lot. He knows his college football really well,” Miller said. “In years past, we had some games where we were 14 or even 20 points off on the (closing) spread. It opened us up to middles.”

Lately, the trio has consistently been on the mark with many of their numbers, relative to the closing lines at kickoff.

With so many games every year, it can be hard to keep track of all of them as the season unfolds. But some of them tend to stand out even years later.

“The one I’ll always remember is from the first year, 2007,” Kessler said. “It was USC at Notre Dame. We had a really soft number on the game, USC -28. And we just got absolutely slammed with Notre Dame money. The game ultimately went off at -17, and USC pounded Notre Dame, 38-0.”

So that ended up being a great, though fortuitous, June pointspread on a game played four months later. The line dove 11 points by game day, yet there was no luck to be had for Irish bettors, many of whom probably thought for certain that getting 28 points in June was a lead-pipe cinch, especially for a home game. It’s a scenario Miller has seen many times.

“We have the teams we’re high on, and the guys who come in and bet, they’re high on their teams. That’s where we get the fluctuation of opinion,” Miller said. “After they bet, guys are telling us they can’t believe the line, and that we’re really way off. They tell us they got us. And on our side of the counter, we’re thinking, ‘We got them.’”

But the book can be had, and last year provided a great example. Miller, Kessler and Marshall couldn’t correctly peg then-defending national champion Florida State. The Seminoles went 14-0 straight up in 2013 and were a stout 11-3 against the spread, winning by at least 27 points in all but one regular season game before edging Auburn 34-31 as 11.5-point chalk in the national title tilt.

Last June, when the 2014 Games of the Year came out, the popular Seminoles had eight of their contests on the board and were generally hefty favorites. But from Week 1, they couldn’t beat the initial big spreads of June or even the bet-down numbers at kickoff, going 3-10 against the closing line during another 13-0 SU regular season. Then Florida State was a 7.5-point underdog against Oregon in the national semifinals and got blistered, 59-20.

“We were so high on Florida State last year. It turned out we were off,” Marshall said. “Even people who took Florida State later, the Seminoles weren’t covering the numbers. We were basing a lot on 2013. That year, Tony couldn’t make the number high enough. But early on in 2014, it was clear they weren’t the same team.

“We took it on the chin with Florida State, but that was about it. We won on a bunch of others.”

So is there a Florida State lurking this season? Maybe so, says Marshall.

“We’ve had to keep that in mind. Perhaps we have the same situation with Ohio State,” he said of the Buckeyes, who went 14-1 SU and a respectable 10-5 ATS last season. “But we only have four Ohio State games. Most of the Buckeyes’ schedule this year, the number will be in the 30s.”

For the 2015 season, Miller, Kessler and Marshall all have their own favorites.

“What sticks out for me as far as two teams with really high power ratings is TCU-Baylor,” Miller said of the Nov. 27 Big 12 showdown on the Horned Frogs’ home field. “It will be exciting to watch, and the game is going to mean a lot. The total will probably be around 80 points.

“We’ve got TCU -6. That might be the game of the year this season. I think TCU and Ohio State are the two favorites to be in the national championship game.”

Kessler thinks some people are suddenly forgetful of a certain SEC team.

“A team that should always get a lot of love and is not getting it is Alabama,” he said.

Marshall also pointed to a traditional power, though one that has seen more ups and downs than the steady Crimson Tide.

“Notre Dame is interesting. There’s a little more discussion this year,” he said. “As usual, we have a lot of Notre Dame’s games up there, so we want to try to get those numbers right.”

All three noted they didn’t have too much trouble reaching a consensus Thursday as they hashed out all the lines. But there was a little dissention in the ranks.

“Where my numbers were quite different than Bruce’s and Aaron’s was on Stanford,” Miller said. “That’s where we had to butt heads. I have to come down or they have to come up.”

Miller also circled one game in which both teams have new coaches – Jim Harbaugh at traditional national powerhouse Michigan, and Tony Sanchez trying to turn around perennial local loser UNLV.

“Tony Sanchez at UNLV, right off the bat, he has to go to Michigan,” Miller said. “He’s going to be a good coach, but he’s going to have a rough start. Michigan is at -33. Jim Harbaugh is going to want to make a statement right away, and I’m afraid he’s going to take it out on UNLV to do that.”

We’ll find out about that and the other 165 Games of the Year in due time, now that the heavy lifting is done and the lines are posted.

“Right now, it’s fun, but leading up to today, there’s so much work going into it,” Miller said. “It’s tedious getting to this point, but now we get to let our hair down.”

And of course, they’re eager to be proven right.

“The process is so streamlined, we’re just humming along this year. Every year, we agree more and more – we get in step pretty well. I’m just hoping we’re right on,” Kessler said, adding he feels good about the lines. “Even if the bettors fire away this year, we might be all right.”


Here's a look at the full list of the Golden Nugget's College Football Games of the Year odds: 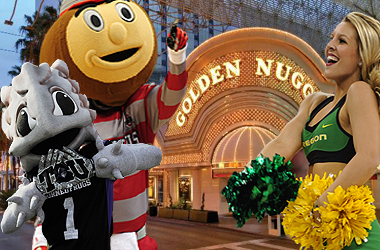 Washington vs Arizona Picks and Predictions: The Ultimate Get-Right Game
JD Yonke | Oct 20, 2021
About Us
Contact Us
Careers
Our Team
Brand
Testimonials