BYU vs Navy picks and predictions for September 7

College football betting caps off Week 1 Monday night at Navy-Marine Corps Memorial Stadium as the Navy Midshipmen host the BYU Cougars. Navy is coming off an 11-2 season (10-3 ATS), but they’ll be in tough to repeat that success as they try and replace star quarterback Malcolm Perry.

We break down the NCAA football odds with our best college football picks and predictions BYU vs Navy on Monday, September 7 with kickoff set for 9 p.m. ET.

It should be a beautiful night for football in Annapolis, MD. The forecast is calling for clear skies and temperatures in the mid-70s for kickoff. There will be a minimal six-mile per hour wind blowing towards the northwest endzone. Be sure to monitor the gametime conditions with our NCAA football weather info.

BYU struggled as a favorite last season, going 0-7 ATS when laying points. Get the latest NCAA football betting trends for BYU vs. Navy.

Against the spread (ATS) Pick

Dalen Morris is expected to be the man for Navy now, and he is a senior so he will know the system, but the Midshipmen will have nowhere near the explosiveness it had with Perry under center.

But it needs to be noted that BYU had a solid run defense last year, allowing 4.2 yards per carry, and they have the tools needed to slow down the triple option. The Cougars' strongest positional group should be their linebackers in 2020 and their depth should let them flow sideline to sideline with Navy’s triple-option run scheme.

While Wilson will be working with a lot of new faces, the offensive line is familiar, veteran, and solid. The line should give Wilson time to make some throws and attack a Navy secondary that lost some impact players to the transfer portal this offseason.

Take the Cougars to get the job done in the opener as the defense does just enough to slow down the triple option, and Wilson leads a key drive late.

Talk about a clash of styles. Navy, of course, comes in with their classic triple-option offense, while BYU deploys a wide-open offense that tries to attack you from all angles. What's more interesting about that clash is that it was the Cougars who were the better Under bet last season at 4-9 O/U, while the Midshipmen went 7-6.

Navy is coming off one of its best offensive seasons in recent memory, ranking 11th in the nation in scoring against FBS opponents at 36.5 points per game. Unfortunately for the Midshipmen, if they want to continue that success they’ll have to do it without one of the most prolific players in Navy football history in Perry.

As a senior quarterback, Perry led Navy in rushing with 2,017 yards and 21 scores and added another 1,084 yards and seven touchdowns through the air.

On the other side, Zach Wilson will be back under center for the Cougars in his junior season. Wilson threw for 2,382 yards with just 11 touchdowns and nine interceptions. But Wilson will need to find some new chemistry with his pass-catchers. His top three wideouts are gone and the devastating news out of practice this week was that they lost super talented tight end Matt Bushman for the year to an Achilles.

With the clock-eating style of the triple option, and BYU likely to lean on its running game a little more, this game is a good candidate to stay Under the number.

Navy was one of the more potent first quarter teams last season, but you can’t understate how much of a loss Perry is to the Midshipmen offense. With Perry gone you can expect Navy’s triple option will be a little more plodding with a move the chains mentality. Plus, they are always one of the leaders in the country when it comes to time of possession.

Meanwhile, BYU was one of the lowest scoring first quarter teams in the nation last year, averaging 4.8 points per first quarter for the season. Plus, Wilson will be testing out a bunch of new weapons for the first time in game action.

Expect there to be some feeling out early on in this one and take the first quarter to be a low scoring one. 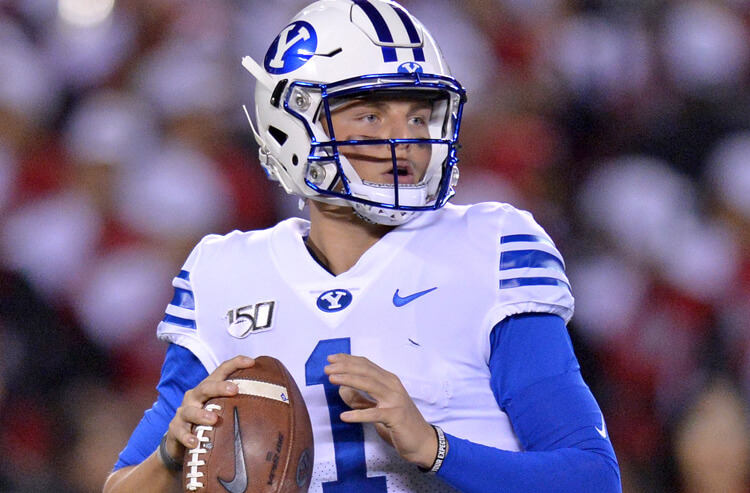 BYU vs Navy picks and predictions for September 7
Provided by