After going to L.A. and beating the Lakers, the Golden State Warriors will host the Kawhi-less Clippers in its home opener. Find out who we're backing in this west coast battle in our Clippers vs. Warriors picks and predictions.

On Thursday, October 21, the Golden State Warriors look to improve to 2-0 with a win over the Los Angeles Clippers at the Chase Center in San Francisco, California. This game tips off at 10:00 p.m. ET, when the Warriors have an opportunity to knock off a second L.A. team in a single week.

Will Golden State pick up a victory in its home opener? Find out in our Clippers vs. Warriors picks and predictions.

The Warriors have been favored by 3.5 since this thing opened and the line hasn’t moved at all. A large majority of bettors have Golden State in this one, which means the sharp money is likely on Los Angeles. The total has actually moved quite a bit, with it opening at 226.5 and getting as high as 228.0.  Use the live odds widget above to track any future line movements right until tip-off and be sure to check out the full NBA odds before betting to ensure you get the best number.

The Warriors are 6-0 ATS in their last six home games. Find more NBA betting trends for Clippers vs. Warriors.

Clippers vs Warriors picks and predictions

The Warriors earned a win over the Los Angeles Lakers in their season opener, but they are seemingly not getting enough respect from the oddsmakers after that victory. Golden State might be without Klay Thompson right now, but Steph Curry is still one of the best players in basketball and is surrounded by an extremely solid supporting cast.

Andrew Wiggins emerged as a legitimate two-way player with the Warriors last year, and Draymond Green is still a game-wrecking defender with excellent playmaking abilities. Golden State also has an absolute gem in 22-year-old Jordan Poole. Poole had 20 points in the season opener and his ability to shoot the ball and make plays off the bounce is reminiscent of Spencer Dinwiddie, who just signed a big contract with the Washington Wizards. Until Thompson comes back, Poole is going to be a problem for opposing teams — and he’ll transition into an elite sixth man after that.

The Warriors now have a home matchup with a Clippers team that could struggle early in the season. Los Angeles will be without Kawhi Leonard for most of the year, but the loss of Patrick Beverley will also hurt this team. Beverley is nothing too special as a player, but he brought a sense of tenacity to the Clippers that can’t be replaced. Like Beverley, Eric Bledsoe is a good point-of-attack defender, but he doesn’t have the same passion for the game or leadership qualities.

Also, Paul George has been superb since thrown into the fire as Los Angeles’ top option on offense, but he’s going to have a tough time dealing with Wiggins on the perimeter along with the help defense of Green. He should have a decent number of points in this game, but he likely won’t be all that efficient in doing so.

Overall, this should be a somewhat straightforward win for the Warriors.

Last season, both the Clippers and the Warriors were Top 10 in defensive rating, suggesting these are two rock-solid defensive teams. Meanwhile, Los Angeles was also 28th in the league in pace of play, meaning that the Clippers don’t get up and down the floor and try to outgun their opponents. That’s going to be a significant number to remember when looking at this game.

Los Angeles knows that it can’t simply go out there and try to beat a Curry-led team with offense. Without Leonard in the mix, the Clippers just don’t have anything close to the offensive talent that the Warriors do. What Los Angeles needs to do is slow this game down and try to win with a combination of defense and offensive discipline. With that in mind, it’s hard to imagine this game being all that high-scoring.

While this game is likely to go Under the total, Poole should still be able to turn in a nice offensive performance in this one. Poole scored 20 points against the Lakers in Golden State’s season opener, and he did so in a game in which he didn’t even play all that well. Poole was just 8 for 18 from the floor in that win, and he is capable of shooting a much higher percentage than that.

It is, however, encouraging that Poole shot 18 times in that game, as it shows that the 22-year-old really will have the role that many envisioned for him before the season. Poole is likely going to be second on the team in field goals attempted per game until Thompson returns, and that makes this play such a good value. You won’t see the number this low for long, as eventually people will catch on and realize just how big of a part of this team Poole is.

Did you know that if you parlayed today’s NBA Clippers vs. Warriors predictions and picks in a single-game parlay, you could win $68.36 on a $10 bet? 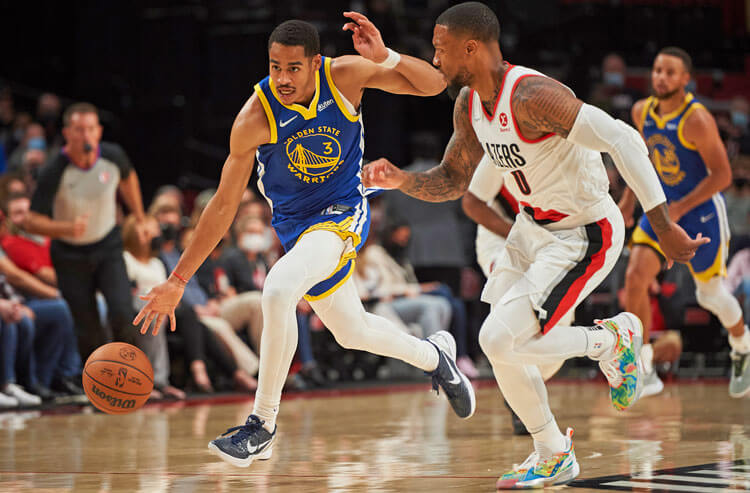 Clippers vs Warriors Picks and Predictions: Warriors Look For L.A. Sweep
Provided by