Caesars Sportsbook became the fourth mobile sportsbook to operate in Wyoming on Tuesday, joining FanDuel, DraftKings, and BetMGM. PointsBet and Barstool Sportsbook have been approved for licenses as well but have not yet gone live in the state.

Caesars was approved in June and was expected to launch in September, one year after Wyoming Gov. Mark Gordon signed a sports-betting bill into law. However, the Caesars Entertainment Inc.-owned bookmaker was able to launch a month earlier than anticipated.

The opening comes on the same day as the release of Caesars' second-quarter earnings, and as Caesars Sportsbook is now live in 24 states and jurisdictions, 18 of which allow for mobile wagering. Caesars is also the operator with the most retail sportsbooks in the U.S.

To compete in Wyoming, the company is touting its rewards program, which is applicable at any Caesars property. It is also offering new customers a sign-up bonus that provides a free bet of up to $1,500 if a first wager loses.

"We're ready to give sports fans in Wyoming the first-class sports betting experience they deserve," said Eric Hession, co-president of Caesars Digital, in a press release. "Our upgraded mobile sports wagering app together with unforgettable experiences through Caesars Rewards is a special combination we're excited to bring to this market."

Wyoming has one of the lowest handles for legal sports betting in the country, as it has the smallest population of any U.S. state. June’s figures, which were released on Monday, showed Wyoming’s online sportsbooks handled $7.3 million in wagers during the month and generated gross gaming revenue of $673,268.

The adjusted taxable gaming revenue in Wyoming was $380,360 and the state saw $38,036 in tax revenue for June. Wyoming taxes its online operators at 10% of revenue, much lower than states like New York, which levies a 51% tax. The average sports-betting tax rate in the US is 19%, according to Morgan Stanley.

Caesars will be trying to make a dent in the Cowboy State, which has been dominated by DraftKings, which has taken 61.5% of total wagers so far, according to the Wyoming Gaming Commission. BetMGM is second at 33.9% and FanDuel, which launched in March, has 4.5% of the market.

Since sports betting became legal in September 2021, the state has had six months in which more than $10 million in handle was reported. The best month was January, when books handled $13.97 million in wagers.

Two advantages the state has is that the legal gambling age is 18 years old, as opposed to 21 in most states, and that residents are also allowed to bet on college teams in Wyoming.

Though sports betting is limited to mobile only, there are Native American casinos that would be allowed to open a sportsbook in their facility. So far, however, none of them have expressed any interest. 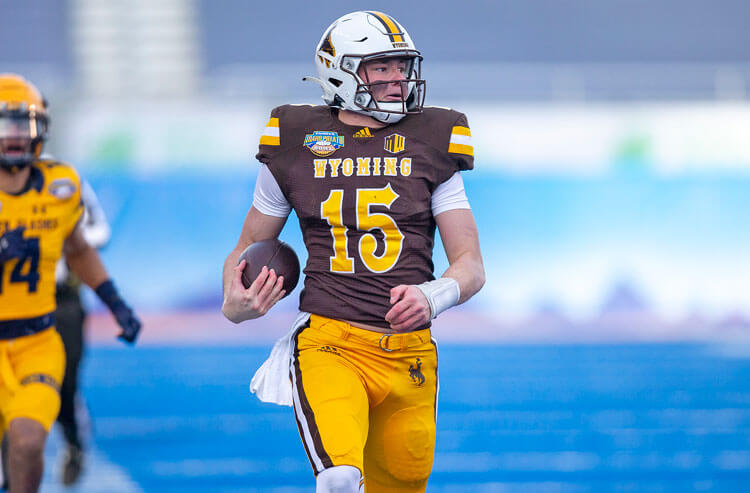