Numbers about the iGaming market are on the way, which could shed some light on how the 15-plus operators doing business within the regulatory framework are faring.

How much is sports betting in Ontario worth?

Indeed, one of the burning questions about Ontario’s new internet gambling market is what Canada’s most populous province will earn from setting up a first-of-its-kind regulatory framework that allows private online sportsbooks to legally take bets.

The regulated iGaming market launched on April 4 under the watch of the Alcohol and Gaming Commission of Ontario (AGCO) and iGaming Ontario (iGO), a government agency. And, according to iGO, numbers about the market are coming soon, which could shed some light on how the 15-plus operators that are live within the regulatory framework are faring.

“Ontario’s internet gaming market performance metrics since the market launch will be coming out soon,” the agency told Covers in an email on Friday. “Once the new government is sworn in, iGaming Ontario will be able to coordinate with the government on releasing the data.”

The release of such data is common in the United States, where more than 30 jurisdictions have legalized some form of sports betting. Premier Doug Ford and his new cabinet were also sworn in Friday at Queen’s Park in Toronto, which should bring the release of official figures about the province’s new market for internet gambling even closer.

In the meantime, though, several figures have been floated that hint at the potential size of the province's sports-betting market and the revenue haul for the Ontario government.

For example, documents obtained by Covers through a freedom-of-information request suggest illegal bookmakers were once thought to be clearing more than $100 million a year in revenue in Ontario. The figure has popped up in other media outlets, and the documents show it was part of the provincial government's thinking about the merits of single-game sports betting.

A briefing note dated June 25, 2021, from the Ministry of Finance laid out the Ontario government's position on single-event sports betting, which was that the province was in favour of such wagering. At the time, federal lawmakers had just passed a bill that would authorize provinces to offer single-event betting, except on horse racing, after a longstanding prohibition.

“Single event sports wagering is one of the fastest growing categories of gaming entertainment,” the briefing note says. “Recent estimates indicate that illegal sports betting generates $110 million per year in revenue in Ontario alone, of which the majority is single events wagering.”

A spokesperson for Ontario’s Ministry of Finance told Covers that the $110-million figure “was an early estimate of unregulated online sports betting activity in Ontario in 2019, based on industry data.”

“This estimate was in reference to ‘gross gaming revenues’, reflecting gross wagers less prize payouts to bettors,” Scott Blodgett said in an email earlier this month. “Since then, the Province has updated its forecast of unregulated market activity based on more recent information and data.”

The province's updated forecast has not been released, Blodgett told Covers.

Ontario's competitive market for online sports betting and internet casino gambling now includes more than 15 sportsbooks taking single-game wagers and more. The regulated market for legal sports betting is the first of its kind in Canada, where most provinces permit only government-owned lottery and gaming corporations to operate books.

It's probably unlikely that all of the $110 million in estimated annual revenue — or the actual annual revenue — that was previously flowing to illicit sources will wind up in the hands of the province and provincially regulated operators. However, what exactly the province is now earning from bookmakers remains fuzzy, as there have been no official revenue reports yet from iGaming Ontario, the government agency that is legally responsible for the new iGaming market.

“iGO’s approach to revenue reporting is expected to be communicated at an appropriate time after the election,” Blodgett said.

There have been estimates recently unearthed by a provincial watchdog that are below $110 million per year. This could speak to the difficulty of forecasting black and “grey” market wagering, as well as nailing down how much of that activity may migrate to provincially regulated channels.

“This is the bottom line that’s projected at this point from the iGaming operations in Ontario,” Auditor General Bonnie Lysyk said in an interview with Covers.

Complicating the picture is an Ontario government press release in July 2021 noting the incorporation of iGO, which said provincial residents were spending nearly $1 billion a year on online gambling. Of that, the release said, "an estimated 70 per cent [is] taking place on unregulated, grey market websites, with limited, if any, consumer protection and responsible gaming measures."

Not all of that money would be spent on sports betting. Still, the sizable “grey” activity was a big driver of Ontario’s regulated iGaming market, as the government sought to provide more legal options to bettors and more consumer protection overall for players.

It will take some time to sort out the value of Ontario's sports-betting market. However, the documents obtained by Covers provide insight into the province’s support for legalizing single-game wagering.

"If single event wagering is not offered through a province or an agent of the province in Ontario, it will still remain an illegal offering for Ontario players, even with these changes to the Criminal Code of Canada," the briefing note says. "Ontario consumers spend a significant amount per year on illegal sports betting, of which the majority is single event wagering."

The note shows the Ontario government viewed singles as “a very important addition” to the competitive market for internet gambling that it was then planning to launch by the end of 2021.

Also noted in the document is the boom in sports betting in the United States following a 2018 decision by the U.S. Supreme Court that allowed all states to authorize bookmaking operations.

Through that lens, single-game betting was viewed as an important addition to Ontario's land-based casinos, some of which fight for business with rivals just across the border in the U.S.

Ontario Lottery and Gaming Corp. is legally responsible for gambling at the province's brick-and-mortar casinos, none of which are currently offering in-person single-game sports betting. 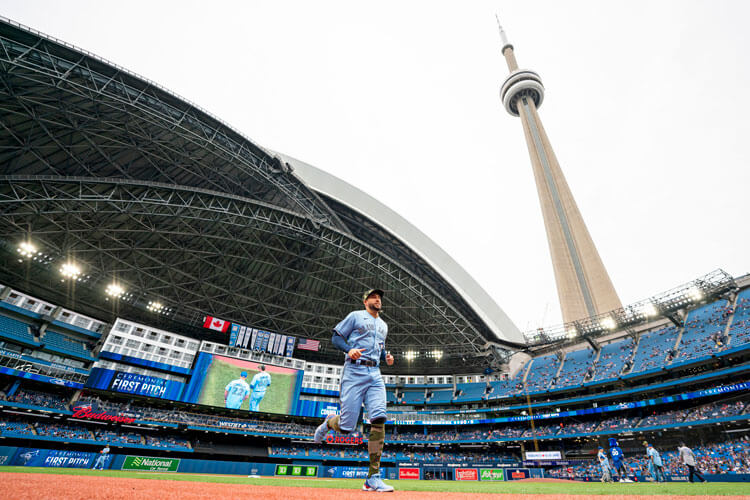