With just two weeks remaining of the regular season and one available playoff spot, the New Orleans Breakdesr (-3) are looking to lock themselves in with a win over Tampa Bay. Find out if they get the job done in our best betting picks for USFL Week 9.

With just two weeks remaining of the USFL regular season, the playoff picture is starting to take shape for when the top four teams in the league face off in Canton, Ohio.

Three spots in the playoffs have already been claimed, while one spot remains up for grabs. The Birmingham Stallions (8-0), New Jersey Generals (7-1), and Philadelphia Stars (5-3) have all punched their respective tickets to Canton.

The New Orleans Breakers (5-3) can clinch a spot in the playoffs with a win over the Tampa Bay Bandits (4-4) in the game of the weekend.

Check out our picks and predictions for Week 9 of the USFL.

If you're signing up for a new sportsbook for the USFL, here are two of the best bonuses* available:

New users at FanDuel can bet $5 and get $200 in free bets — regardless of if your bet wins or loses! Sign Up Now

If you’ve tuned into this column previously, then you’re probably already aware that I believe the Generals are the best team in the USFL at this point in the season. They’ve dominated both lines of scrimmage in a manner that no other team in the league can compete with. It’s no small matter that they rank first in both rushing offense and rushing defense.

Mike Riley’s squad has already clinched a playoff spot and there’s a chance they rest some players to be full-go for the playoffs. This is the first year of the USFL’s return and therefore we have no precedent to rely on for how the frontrunners will handle resting key players once a playoff spot has been clinched. The rosters are small and it would require some tricky maneuvering to rest key guys unless the coach opts to not play starters the full game.

This will be mentioned every week in this column, but Jeff Fisher is on a quest to be the all-time losingest coach in two leagues: the NFL and the USFL. His Panthers (1-7) are tied with the Maulers and Gamblers at the league’s basement.

Michigan did have a solid defense to rely on for the first half of the season, but they’ve completely fallen apart on that side of the ball. They’ve allowed over 30 points in each of their last three games, highlighted by a 46-24 shellacking at the hands of the Stars a week ago. The offense looks better with Paxton Lynch at quarterback, but this appears to be a team in free fall at this juncture and we’ll respect Fisher’s quest to break multiple records for the wrong reason.

The second game on Saturday features a team with the best record in the league facing arguably the worst team in the league.

The hometown Stallions have been the star of the show in Birmingham, compiling an undefeated record under Skip Holtz after entering the season with few expectations. They’re in the same boat we mentioned with the Generals in that they’ve already locked up a playoff spot and it remains to be seen what kind of rest, if any, they opt to give key players.

Kevin Sumlin’s Gablers’ squad has as bad of a statistical profile as you can get. They allow 348 yards per game defensively (worst in the league) while mustering only 246.8 ypg offensively (also last). They remarkably have the worst offense and the worst defense in the USFL. Incredible stuff, Sumlin & Co.

The Gamblers are getting outgained by over 100 yards per game and oftentimes look hapless on the field. They rely on fluky turnovers to turn the game, but the Stallions would be wise to play somewhat conservatively considering they already have a playoff spot locked up. We saw that play out last week in a sleepy 10-9 victory over the Breakers.

For as wide of a gap as there is between these two teams, I can’t lay this many points in a USFL game. The Gamblers haven’t lost a game by over 12 points all season and played the Stallions within five points in a 33-28 game in Week 3.

The game of the weekend kicks off Sunday afternoon in a matchup that will help determine the final playoff spot.

All eyes are on the Breakers, who can clinch the fourth and final playoff spot with a win. The bookmakers seem to expect quarterback Kyle Sloter & Co. to bring home the victory, as they range from between a -3 to -3.5 favorite at various books.

What’s telling is the future odds, as New Orleans is listed at +275 to win the title despite having yet to clinch. That’s narrowly behind the Generals (+250), who have dominated the opposition and have already clinched at 7-1. The Stars are listed at +700 despite having clinched, a sign that bookmakers believe in New Orleans’ superiority.

I’m a fan of this Breakers team as well. Sloter leads the league in passing yards and they rank second in total offense (337.8 ypg). The defense is underrated, ranking third in both total defense (280.6 ypg) and scoring defense (16.8 ppg).

I mention this every week in this column, but I think the Bandits have been severely overrated all year. They have a good quarterback in Jordan Ta’amu. People recognize his name and show this team far too much respect because of it. The issue is that this team isn’t good anywhere outside of Ta’amu and is being outgained by 25 yards per game.

Give me the Breakers to clinch a playoff spot with a statement win.

Sunday Night’s primetime game features little intrigue. The Stars (5-3) have already locked up a playoff spot, while the Maulers (1-7) would be fighting for relegation if this were a soccer match.

Bart Andrus’ passing attack has been hit or miss with the Stars, but it’s important to note that quarterback Bryan Scott has been out with injury for most of the season. He was supposed to be the engine that made this offense go, and losing him is no small matter.

Backup Case Cookus took a while to find his groove, but he sure did look comfortable a week ago. Cookus was cooking against the Panthers in Week 8, completing 20 of 26 attempts for 247 yards and four touchdowns while adding another 102 yards and a score on the ground.

Kirby Wilson’s Maulers squad has had a bleak season and things don’t appear to be getting any better. They’ve played four different quarterbacks and not one of them has clicked. Roland Rivers got the nod a week ago but completed less than 50% of his passes in a 29-18 loss to the Generals.

All that being said, I think this is too many points. I don’t like to lay the points with a big favorite in a league as volatile as the USFL. The Stars still have some glaring deficiencies on the defensive side of the ball, and they aren’t a team that will make you feel comfortable even if they jump out to an early lead.

The Maulers would’ve covered a week ago against a Generals team that I rate much higher than the Stars, but had a field goal bounce off the uprights with a few minutes remaining in the fourth quarter.

Use our USFL parlay calculator to create your own parlays and see their potential payouts. 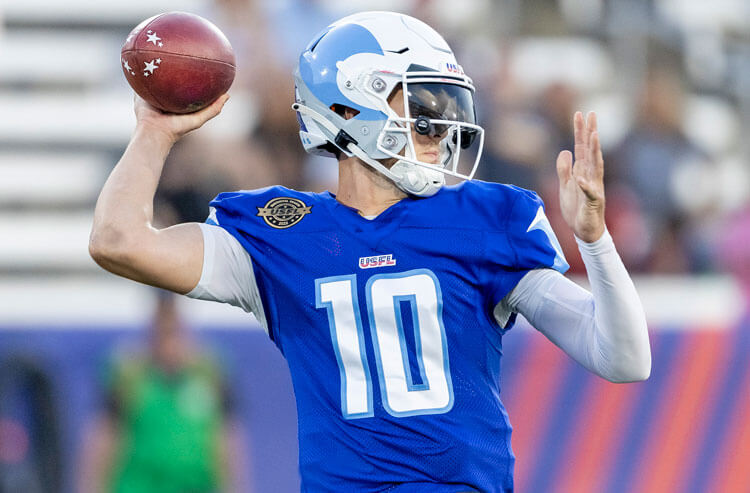