California voters will go to the polls on November 8 to decide between a sportsbook-sponsored bill to legalize online betting or a rival measure backed by a coalition of 50 Native American tribes.

Major League Baseball has offered a show of support for the ballot measure that would legalize online sports betting in California, adding an influential voice to the fight over whether and how to allow wagering in the Golden State.

MLB issued a statement on Friday endorsing the integrity provisions in Proposition 27, the legislative measure sponsored by FanDuel, DraftKings, BetMGM, and several smaller operators that would permit online sportsbooks in California.

The league also says the initiative would create a safe and responsible mobile sports wagering market in the state.

California voters will go to the polls on November 8 to decide whether to back the online-sportsbook bill or a rival piece of legislation backed by a coalition of more than 50 Native American tribes and their allies.

Major League Baseball just weighed in on the sports-betting ballot fight in California with a statement that is pretty supportive of the measure that would legalize online wagering in the state: pic.twitter.com/97hrnsIGwF

Proposition 26, as it is designated, would permit only in-person sports wagering at tribal casinos and four horse-racing tracks. This would help maintain the tribes’ strong position in the state’s legal gambling industry and keep in place the existing ban on mobile wagering.

However, professional baseball has embraced legal sports betting and online wagering in particular. California is also home to the largest number of professional sports franchises in any state, including MLB’s Los Angeles Dodgers and San Francisco Giants.

MLB is now the first of the big professional sports leagues in the U.S. to throw its weight behind Prop 27.

"As legalized sports betting continues to expand across the country, Major League Baseball remains committed to protecting the integrity of its games and creating a safe experience for fans who wish to wager on those games,” the league said in a statement on Friday. “Proposition 27––the only measure on California’s upcoming ballot that would authorize and regulate online sports betting––includes strong integrity provisions designed to help MLB carry out those commitments."

Hitting for the (news) cycle

MLB's backing of Prop 27 will certainly delight the major sportsbooks and the other proponents of the legislation. It also reverses a week of negative news for those parties, which saw leading state legislators and two teachers' unions condemn the bill.

Four senior California politicians from both the Democratic and Republican sides of the legislative aisle collectively expressed their opposition to Prop 27, which would finally bring online sports betting to the richest and most populous state in the U.S.

The politicians instead threw their support behind the state's leading native tribes, which say they face a threat to their livelihoods and sovereignty should the online sports betting bill, known officially as "The California Solutions to Homeless and Mental Health Support Act," be approved by voters.

"California’s tribes have proven to be safe and responsible operators of gaming in California, providing benefits to their communities and to their members," Atkins, the Democratic Party's Senate majority leader, told the Mercury News in San Jose.

Meanwhile, her Republican Senate counterpart, Scott Wilk, in a rare display of bipartisan solidarity, argued that "Prop 27 eliminates the sovereign right of California tribes to operate gaming in California,” adding “they have proven to be excellent stewards of this responsibility."

The legislators' opposition to Prop 27 follows on the heels of Wednesday's announcement by the California Federation of Teachers (CFT), a union representing more than 120,000 education workers, and the Association of California School Administrators (ACSA), a professional group representing 17,000 education leaders, that their organizations were both firmly against the passage of Prop 27.

CFT President Jeff Freitas claimed that sports betting could prove "highly addictive" for young people and represents a "bad deal for California and for our public schools."

But MLB has now thrown its collective clout behind online sports betting in California, which could be good news for those in the state that are keen to get down a mobile wager without breaking any laws.

The entrance of MLB into the fray will raise the stakes even higher in California as well, where the antes for the legal sports wagering tussle were already substantial.

Sportsbook operators, such as DraftKings and FanDuel, have already invested $150 million into their campaign. Meanwhile, Native American tribes and cardroom operators have contributed a total of $199 million in spending on ads either backing Prop 26 or attacking Prop 27.

And while 50 or more tribes currently oppose the sportsbooks' looming takeover of gaming in California, other non-casino-owing tribes could benefit from a key provision in Prop 27 that obliges the out-of-state operators to partner with state Native American tribes to be licensed in California.

The sportsbooks are also counting on voter sympathy for another critical aspect of their bill, which earmarks 85% of the revenues generated from the projected 10% state tax on online betting revenues towards supporting the homeless and mental health care.

The MLB statement also cites several key elements contained in Prop 27 that the league says would provide important guardrails. That includes a requirement for online sportsbook operators to notify leagues of suspicious wagering activity and for the leagues to propose restrictions on certain betting markets that could be vulnerable to manipulation.

“MLB,” the statement adds, “believes that Prop 27 has the safeguards to create a safe and responsible online sports betting market in California––a state with millions of MLB fans looking for alternatives to illegal offshore betting sites." 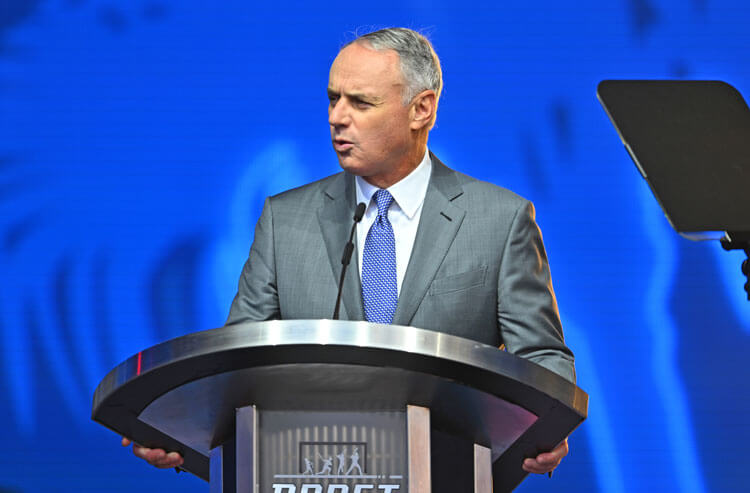