Cricket betting is incredibly popular worldwide and cricket odds for the 2021 ICC Men's T20 World Cup remain on the board after the tournament, originally scheduled for October/November 2020, was pushed to 2021 due to the COVID-19 pandemic that has rocked the world.

There are 16 nations involved in the T20 World Cup, which generates massive betting handle at sportsbooks around the globe. Here's a deeper look at the ICC Men's T20 World Cup cricket odds.

Who is the favorite to win the ICC T20 Cricket World Cup?

India, now set to host the tournament after Australia was originally supposed to last year, is the betting favorite to win the ICC T20 World Cup at +250. The hosts are closely followed by England (+350) and Australia (+400).

The West Indies are the reigning T20 World Cup champions, winning the tournament in 2016, but are currently ranked just 10th in the ICC world rankings and are tied for fifth on the odds board at +900.

According to the ICC T20 team rankings, South Africa is currently the fifth-highest ranked team in the world, but has good value as a +1,100 live long shot to win the upcoming World Cup.

Where is the T20 Cricket World Cup taking place?

The 2021 ICC T20 Cricket World Cup will be held in India after the tournament was moved not just from 2020 to 2021, but from Australia to India. In announcing the location change to India, the ICC confirmed the T20 World Cup would still take place in October and November.

What is the T20 Cricket World Cup?

The T20 World Cup, formerly known as the ICC World Twenty20, is an international cricket tournament that takes place every few years. The first-ever T20 World Cup took place in 2007 and the last tournament was held in 2016. The next T20 World Cup is scheduled for 2021 in India.

Who has won the T20 Cricket World Cup?

Despite India being the favorites for the upcoming T20 World Cup, no host nation has ever won the tournament and only one host team has ever made it to the finals (Sri Lanka in 2012).

Here are the T20 World Cup winners and runners-up since the tournament began in 2007.

What is T20 cricket?

Twenty20 cricket, usually shortened to T20, is a format of cricket that is played over approximately three hours. Each side plays a single innings which ends either after 20 overs or when every player has batted out (generally the 20 overs limit will be reached before all wickets are taken).

An over is a period of six legal deliveries by a bowler. An individual bowler is limited to a maximum of four overs per contest, limiting the impact that an elite bowler can have on a game.

With the fielding team penalized for slowing down the game and the batting team attempting to score as many runs as possible within a fixed period of time, T20 features aggressive batting and fast-paced play which makes for a highly entertaining brand of cricket.

Sportsbooks will post odds to win big tournaments such as the ICC Men's T20 World Cup as soon as the previous tournament finishes. These odds will continually adjust based on the results of international test matches and the performances of individual players. Sportsbooks will also adjust the cricket odds based on handle and liability to certain teams.

This means that if you placed a $100 bet on England to win the 2019 Cricket World Cup, you would have won $200 when they eventually won.

If one nation is particularly dominant, it's possible you might see a team with a minus sign (-) ahead of its odds, like India just before the 2018 Asia Cup.

This means that you had to bet $120 to win $100 by wagering on India to win the tournament.

Above we have posted the American odds for the ICC T20 World Cup. However, these are easy to convert to decimal odds or fractional odds with our odds converter tool.

Where can I bet on cricket World Cup odds?

Many online sportsbooks and casinos offer futures bets on cricket tournaments such as the T20 World Cup and the 2023 Cricket World Cup. Check out the best sportsbooks available where you live. 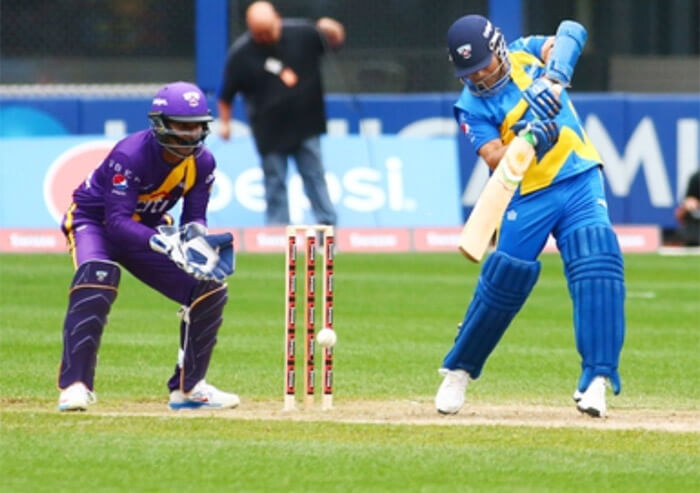