Oklahoma vs Mississippi College World Series Picks and Predictions: Rebels Fail to Rise Up in Game 1

The Sooners and Rebels have caught fire at the right time to reach the College World Series, and while this series should be close, Game 1 puts Mississippi at a serious disadvantage on the mound — find out more in our college baseball betting picks.

Oklahoma coach Skip Johnson says that his team has adopted the underdog identity as they head into the College World Series.

The Rebels have a bone to pick with that label, seeing as they were the last at-large team invited to the NCAA Tournament. Mississippi shut out Arkansas 2-0 to advance to what will be just its second appearance in the CWS since 1972. It was just 14-16 in SEC play but has shown another level come postseason play.

Will it be the Rebels or Sooners in Game 1? Check out our college baseball picks and predictions for Game 1 of the College World Series between Mississippi and Oklahoma on Saturday, June 24.

If you're signing up for a new sportsbook for the 2022 College World Series, here are two of the best bonuses* available:

Jack Dougherty (3-3, 5.08 ERA): The sophomore right-hander was last seen in two scoreless innings of relief against Arkansas on Wednesday. He hasn’t started a game since back on March 26 against Tennessee, when he allowed six runs in a 10-3 loss.

He’s been decent out of the bullpen since then, but he’s not the ace some might expect to see in Game 1 of the CWS. Dylan DeLucia is resting for this game after tossing 16.2 innings of one-run ball in the CWS, so it’s up to Dougherty to keep the boat afloat.

Jake Bennett (10-3, 3.66 ERA): Bennett is the Sooners’ ace, The left-hander has tossed 110.2 innings while striking out 123 batters. He will be fully rested for this matchup, giving Oklahoma a leg-up in Game 1. He can still be hit, as evidenced by Texas A&M knocking in four earned runs across six innings in his last start.

Sunday's forecast in Omaha calls for cloudy skies and temperatures in the high 70s range. Winds will be gusting at 12mph with zero chance of rain.

Oklahoma vs Mississippi picks and predictions

Neither team is a dominant force. Mississippi was 40-23 overall and just 14-16 in SEC conference play, while Oklahoma (45-22) has referred to themselves as a “team full of Davids” in reference to their underdog mentality. There is no Goliath. Both teams will battle to the death regardless.

The Sooners have been scorching hot, winning each of their last five Big 12 regular-season series before sweeping the conference tournament and going a perfect 3-0 in the CWS to advance to the finals. Miss has shown few weaknesses, going 8-1 since NCAA Tournament play began. They were seeded ninth in the SEC Tournament, but have turned into postseason killers.

Neither team was an unbeatable force throughout the season, but both are peaking at exactly the right time and are playing beautiful baseball.

Vegas sees this series as a toss-up. Mississippi is lined as very light favorites (-125), while the Sooners can be had around -+105 at most books. The toss-up notion feels spot-on.

The Sooners have been mashing at the plate. They’re hitting over .300 in tournament play while averaging eight runs per game. They have the advantage of being rested heading into this matchup after sweeping the CWS 3-0. This allows them to have their choice at starting pitcher, while the Rebels have been forced into making a reliever spot-start.

Game 1 comes down to Oklahoma being the more rested team. The Sooners have their ace on the mound in Bennett, while the Rebels have been forced to start the game with the bullpen. This is a close series and Mississippi is live to win any game, but Oklahoma is the rightful favorite to take an early lead in the series.

The Sooners have been knocking the laces off the ball and they get a favorable pitching matchup. Dougherty has been a solid option out of the pen for the Rebels, but there’s a reason he hasn’t started a game over the last two months. Miss is buying time until their starting pitchers can rest up.

The Sooners have battered around every good team they’ve faced on their way to the finals, including Florida and Virginia Tech. Expect the Rebels to go to the bullpen early if Dougherty struggles, but that’s a lot to ask from a lot of different arms in Game 1 against a potent lineup with a slugging percentage above .500 in the CWS.

Bennett has been an ace for Oklahoma, but he’s not unhittable. His 3.66 ERA is solid, but Mississippi is averaging 7.6 runs in the NCAA Tournament.

My one concern is that the Rebels struggled against left-handed pitched when facing Arkansas. Other than that, both teams are hot, and I anticipate runs should be scored.

It’s not a strong lean, but the Over is the play given that both teams are hot at the plate.

This season is a coin flip for a reason. Both teams were mediocre-at-best to begin the season, but both have found a new level and deserve a chance at the sport’s greatest prize.

However, I don’t see Game 1 as a coin flip. Mississippi reached the finals thanks to spectacular pitching, but they must rest their most talented starters and have been forced into starting a bullpen arm for Game 1.

Dougherty has been heroic lately, but his ERA is above 5.00 and he’s facing off with Oklahoma’s ace, who had a full week of rest.

This spot is set up for the Sooners to take Game 1. They have the more trustworthy starter on the mound and have been the hottest offense in the country, batting above .300 and slugging above .500 in tournament play.

I’m taking the Sooners to win Game 1 as I give them the starting pitching and lineup advantage.

Did you know that if you parlayed today’s College World Series parlays Oklahoma vs. Mississippi picks, you could win $24.98 on a $10 bet? 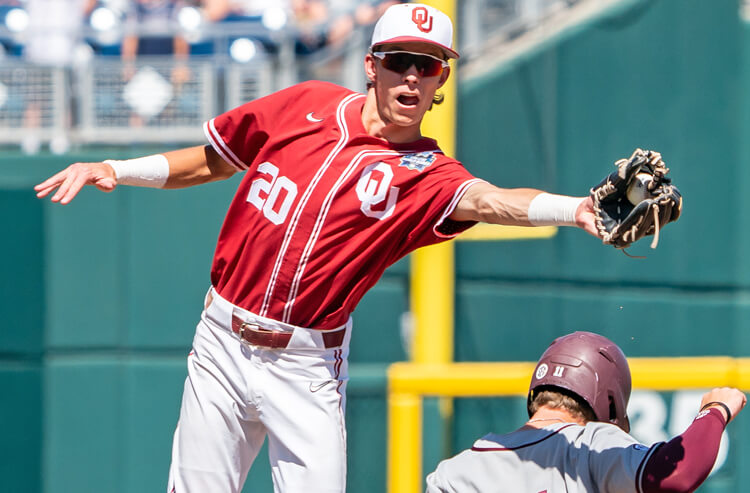 Oklahoma vs Mississippi College World Series Picks and Predictions: Rebels Fail to Rise Up in Game 1
Provided by