France hasn't even faced overtime in the World Cup knockout stage, and Les Bleus are expected to land the bulk of the action for Sunday's final against Croatia.

As the stellar English band The Smiths once sang, “The Queen is dead” in a sense, after Three Lions fell short in the World Cup semifinals. The brilliant luster of an England-France final – and the handlepalooza that match would’ve drawn – died as well. Now, it’s onto the championship betting action.

Covers checks in on the opening line, liability and anticipated handle, with insights from Lee Price, spokesman for PaddyPower.com in Ireland; John Murray, manager at the Westgate Las Vegas Superbook; and D.J. Fields, odds consultant for offshore sportsbook Bookmaker.eu.

Underdog Croatia pulled off the upset of England on Wednesday to reach its first World Cup final. The Croatian side found itself down 1-0 just five minutes in after surrendering a free-kick goal, but Ivan Perisic got the equalizer in the 68th minute, ultimately leading to overtime. In the 106th minute, Mario Mandzukic netted the dagger, and Croatia held on for 14 more minutes to snare a 2-1 victory as a +288 pup.

France’s Tuesday semifinal didn’t have nearly as much drama, nor as much money on the line for those on both sides of the betting counter. Les Bleus made a Samuel Umtiti 51st-minute goal stand up in a 1-0 victory over Belgium as a +155 chalk in three-way action. The French have yet to go overtime in the knockout stage, winning all three matches in 90 minutes plus stoppage.

Missing out on England-France was bittersweet for PaddyPower, which had huge futures liability to the English squad, but also would have seen ridiculous handle on Sunday’s 11 a.m. ET championship match.

“England winning the World Cup would’ve triggered the biggest payout in football betting history. And the final itself, had England been involved, would’ve had 10 times the turnover of the actual final we’ll have,” said Price who counts himself a big England fan. “As it is, both France and Croatia are good results for our book. Just not for the heart.”

Unlike PaddyPower, England winning it all was the best possible futures outcome for the Superbook. And Murray echoed Price’s sentiment in missing out on the England-France handle extravaganza.

“France-Croatia is not going to do the business France-England would have done,” Murray said, before looking to the bright side of a still-solid futures book outcome. “We were already in great shape on all three teams (England, France and Croatia). France just looks like the class of the field right now. In the knockout stage, Croatia hasn’t finished any of its opponents in 90 minutes. They’ve got to be tired, and France has an extra day to prepare.

“I expect to see a lot of parlays, on baseball and such, over the next few days tied to France to lift the trophy. But it would really take a lot to put us in a position where we don’t win money Sunday."

“The public is betting France at -104 as though it were an opportunity to print money. The sharp action sees value at +372 with a Croatia team that bested Argentina and Denmark,” Fields said. “As we approach the showdown on Sunday, we expect the divide between public and pro money to become even more distinct. Croatia has gone to extra time in their last three games, but we have seen very few bets on the draw during this entire World Cup, nor do we expect that to change in the final. As such, the best possible outcome for Bookmaker is the game going to extra time.”

Further, Bookmaker.eu won’t necessarily be a friend of France, thanks to plenty of lingering futures liability on Les Bleus.

“World Cup futures have been great thus far, with Brazil, Argentina and Germany all leaving earlier than expected,” Fields said. “However, we are facing steep exposure with a French team that was available at +626 when the tournament began. We are looking at paying out high six figures if Les Bleus win it all. Croatia came into the World Cup at +3750 to win it all, and we will happily pay that out to knock down the liability with France.”

Meanwhile, England fans will have to settle for Saturday’s third-place match against a Belgium side that already has a 1-0 victory over Three Lions in group play earlier in the tournament. England is a +210 ‘dog in that 10 a.m. ET start, with Belgium +125 and the draw +260.

Price, who actually caught a plane to Russia and was in the stadium for England's semifinal loss, kept his head high while looking ahead to Saturday.

“The real prize is the bronze-medal spot. Right guys?” 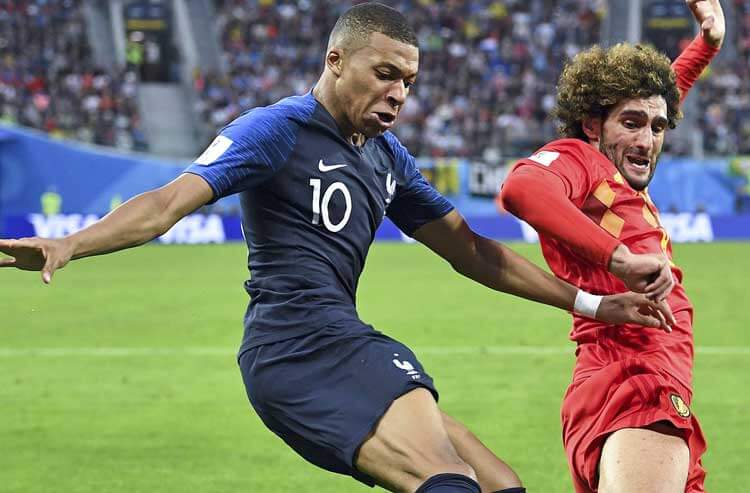