Marquise Brown and Dez Bryant caught scoring passes and J.K. Dobbins rushed for 77 yards and a touchdown for Baltimore (10-5), which bolstered its AFC playoff hopes. Jackson completed 17 of 26 passes for 183 yards and also rushed for 80 yards while Gus Edwards added 85 yards on the ground.

New York (5-10) was outclassed from the start while losing its third straight game and scoring fewer than 20 points for the fifth consecutive outing. Graham Gano kicked two field goals to stretch his streak of consecutive makes to 29, matching the franchise record set by Josh Brown (2014-15).

Daniel Jones returned from hamstring and ankle injuries for the Giants to complete 24 of 41 passes for 252 yards, including a touchdown pass to Sterling Shepard (nine receptions, 77 yards). The Ravens sacked Jones six times with Chris Board recording two.

Baltimore outgained New York 432-269 while possessing the ball for 35:09. The Ravens converted 8 of 11 third-down conversions while the Giants were 1 of 10.

The Ravens set the tone by opening the contest with a 13-play, 82-yard drive that took 8:12. Jackson capped the excursion with a 6-yard scoring pass to Brown.

Baltimore moved 65 yards on 10 plays the second time it had the ball. Dobbins scored from the 2-yard line to make it 14-0 with seven seconds remaining in the first quarter.

Justin Tucker kicked field goals of 20 and 28 yards in the second quarter, the latter coming on the final play of the half. New York's second-quarter points came on Gano's 31-yard field goal with 1:08 left.

Gano booted a 42-yard field goal with 3:54 remaining in the third quarter to cut Baltimore's lead to 14.

The Sharp 600 Podcast: Watch/Listen Every Tuesday and Friday 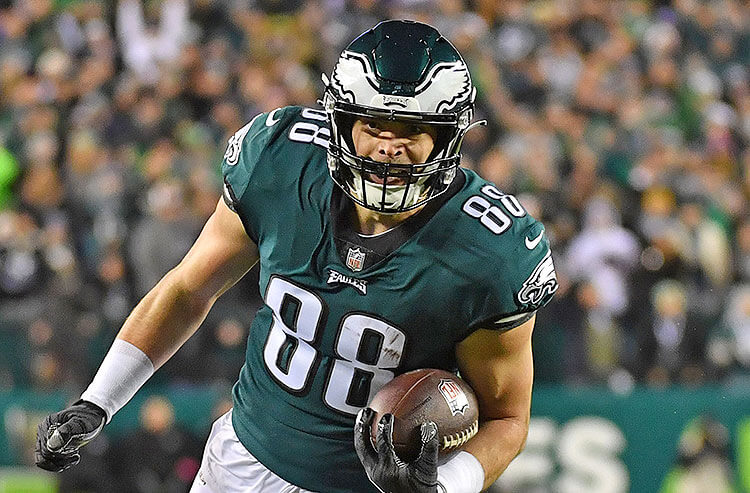 Dallas Goedert Super Bowl 57 Picks: Back Philly's Safety Valve in Glendale
About Us
Contact Us
Careers
Our Team
Brand
Testimonials