Riding the arm of quarterback Gardner Minshew, No. 8 Washington State charged to 41-point halftime lead, scoring 34 points in the second quarter, and went on to beat visiting Arizona 69-28 on Saturday night in a Pac-12 game at Pullman, Wash.

Minshew, the nation's leading passer, solidified his candidacy for the Heisman Trophy by completing 43 of 55 passes for 473 yards with a school-record seven touchdown passes and no interceptions.

Five Washington State receivers had at least five catches and three had at least six, led by Tay Martin, who had seven catches for 124 yards and a touchdown. The Cougars (10-1, 7-1 Pac-12) finished with 605 total yards of offense.

While Minshew was flawless, Arizona (5-6, 4-4) had four turnovers, all resulting in Washington State touchdowns.

What could go wrong in the first half did for Arizona as the Cougars built a 55-14 lead, gaining 407 yards of total offense. The 55 points in a half were the most by Washington State since 1997.

An example of Arizona's frustration came on two plays that led to a 14-point swing for Washington State.

The Wildcats' Cedric Peterson fumbled a kickoff and the Cougars' Kainoa Wilson recovered the loose ball for a touchdown for a 41-14 lead with 7:04 left in the second quarter.

Arizona also had a fumble before reaching the goal line, when running back Gary Brightwell was stripped by linebacker Jahad Woods. Washington State recovered for the touchback and preserved a 48-14 lead with 40 seconds left in the half.

Two plays later, Minshew threw a 50-yard touchdown pass to Martin with 10 seconds left in the half.

Washington State was on track from the start, scoring on five of its first six possessions to take a 34-14 lead with 7:08 left in the second quarter.

By that time, Minshew distributed the ball to 10 receivers and completed 23 of 27 passes for 209 yards with three touchdowns.

Arizona quarterback Khalil Tate, who was a preseason Heisman candidate, showed flashes of last year, leading the Wildcats to a touchdown that cut Washington State's lead to 28-14 with 10:43 left in the second quarter.

Tate rushed 33 yards on a third-down play -- his longest run of the season -- and followed that play with a 37-yard scoring strike to Tony Ellison.

Tate, who completed 18 of 30 for 294 yards with four touchdowns and an interception, engineered touchdown drives on two of Arizona's first three possessions of the second half, cutting Washington State's lead to 55-28 with 1:02 left in the third quarter.

Arizona looked like it could build on the momentum, forcing a Washington State punt at the start of the fourth quarter, but returner Shun Brown muffed it and Woods recovered. The Cougars scored five plays later on a 2-yard touchdown pass from Minshew to Jamire Calvin for the knockout blow.

Southern Miss vs Alabama Picks and Predictions: Time for the Tide to Get Rolling 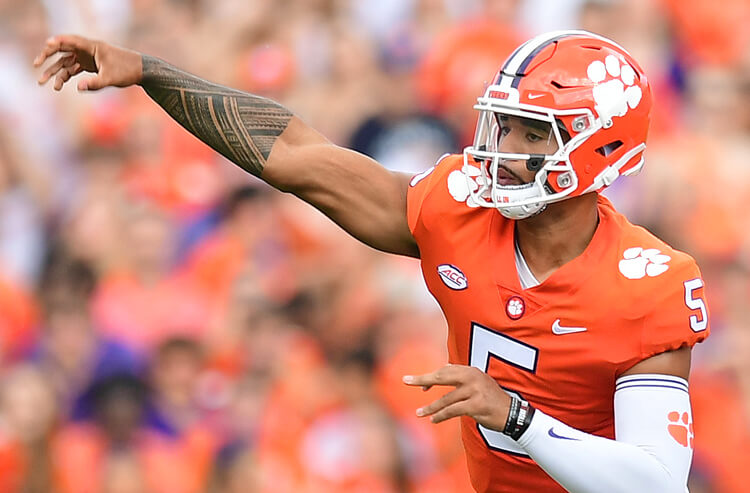 Clemson vs NC State Picks and Predictions: Tigers on the Prowl Again
About Us
Contact Us
Careers
Our Team
Brand
Testimonials