Avalanche vs Lightning Game 4 Picks and Predictions: Colorado Strikes Back

Tampa Bay pulled its way back into the Stanley Cup Final with a dominant Game 3 win. With Colorado now in need of a response, what do the Avalanche have in store vs. the Lightning? Find out with our NHL betting picks for Game 4. 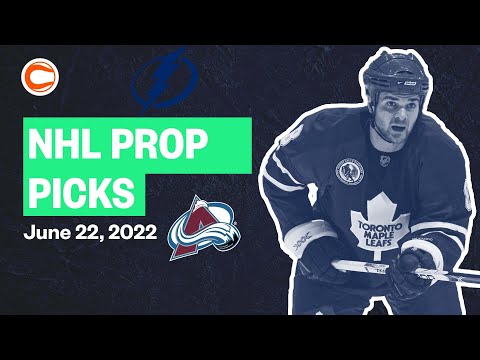 The Tampa Bay Lightning turned the tables on the Colorado Avalanche in a 6-2 win at home in Game 3 of the Stanley Cup Finals. After a 7-0 loss in Game 2, the Bolts returned home and chased the Avs' starting goalie, Darcy Kuemper, in a lopsided win to make this a series.

Can the Avalanche correct the handful of defensive miscues from Monday or will they continue to be hurt by their sub-par goaltending?

Find out in our free NHL picks and predictions for Avalanche vs. Lightning.

The Avalanche opened Game 4 as -115 moneyline favorites. Monday's game in Tampa opened as a pick ‘em but some late money moved the line to Tampa Bay -120. The total opened at 6 again for the fourth straight game but leans to the Under despite the Over going 3-0 so far in the series.

A) Nikita Kucherov and Cale Makar to each record a point BOOSTED to +150 at Betway! Claim Now

Avalanche vs Lightning head-to-head record since 2016-17

The Over is 6-0 in the Lightning’s last six vs. the Western Conference. Find more NHL betting trends for Avalanche vs. Lightning.

The Avs took Game 1 in overtime as Darcy Kuemper was likely the only reason Tampa Bay made it a game, with Colorado outplaying the Bolts. Game 2 was a perfect game from the Avs, who didn’t allow any pressure on Kuemper. Game 3 was a different story, as Colorado had the same goaltending issues as Game 1 but also played its worst game defensively with multiple breakdowns in its own end.

When Game 1 was done, we were left with one thought: Kuemper will be an issue for the Avs going forward. Colorado adjusted in Game 2 and didn’t even allow the Bolts to possess the puck but playing that perfectly on the road in Tampa proved difficult on Monday.

Kuemper lasted just 31 minutes on Monday before being pulled for Pavel Francouz. He gave up five goals and although his defense didn’t help him out, he didn’t do his team any favors. “I felt like the goals we gave up, honestly we just didn’t make them earn them.” Colorado head coach Jared Bednar told the media after the Game 3 loss. He added, “I didn’t think he [Kuemper] had a good night. Neither did our team.”

Right now, we don’t know who will be starting in net for the Avs. Francouz played decently in the Edmonton series and is our preferred choice in net, but for handicapping purposes, we’re expecting the worst and hoping for the best. That scenario has Kuemper back between the pipes in Game 4.

There is some good news for the Avalanche, however. Their Game 3 breakdowns are correctable and might have been a result of the old saying, “one hand on the Cup.”

Tampa's first goal was the result of Colorado's power play getting caught at the end of a penalty. Ondrej Palat's goal was the result of an offensive zone turnover by Devon Toews and then captain Gabriel Landeskog lackadaisically missed his man on a 2-on-3. Steven Stamkos got behind three Colorado defenders for the fourth Tampa goal while Pat Maroon’s goal should have never gone in.

It was far from their Game 2 performance, but the Avalanche can clean this up, as we’ve seen them play much tighter hockey in these playoffs.

The books also opened the Avs as slight favorites for Wednesday’s game after opening Game 2 as a pick ‘em and closing Tampa Bay -115 on the moneyline.

Another thing that gives the Avs an advantage is health. Yes, they're without Nazem Kadri and Alex Burokovsky is questionable, but the Lightning will likely be without Brayden Point for Game 3 and Nikita Kucherov took a nasty cross-check on Monday.

Although Jon Cooper said he is probable to play, the nicks are stacking up on the winger and we wonder how healthy he will be for Game 4. Books are even hesitant to open any of his markets, as Tuesday was an optional skate for both teams.

The Bolts dominated Game 3, but it was thanks to a handful of defensive breakdowns from the Avs, and Bednar’s tough words for Kuemper and the team should prove motivating even if Francouz draws the start.

Colorado is the much faster team, has a power play that is 5-for-11 in the series, and will come out much better Wednesday after a poor result on Monday. Our confidence level on this likely makes it more of a lean than a play but Colorado will correct the mistakes it made in Game 3.

When Colorado plays its best game, it's the better team.

The Over has been perfect so far in this series but the books are still opening Game 4’s total on the low side of 6. Even in both of the one-sided games, there has been so much scoring from the dominant side that the Over hasn’t really been threatened.

The series has seen 22 goals from 178 total shots, which works out to a shooting percentage of 12% — which isn’t that high, with a league-average around of 10%. Even with some high shooting percentages in Game 2 by Colorado and in Game 3 by Tampa, pucks are finding the back of the net at a pretty stable rate.

Vasilevskiy finally stepped up in Game 3 but still got burned two times on the power play. Colorado's power play changes the complexity of the game, as the Bolts should be afraid to take penalties. On the road this postseason, the Avs’ PP is scoring at an incredible 43.5%.

Vasilevskiy currently has a 0.750 save percentage while killing penalties in this series, which is well below the .901 SV% he had shorthanded over the previous two postseasons.

In Games 1 and 2, Tampa managed to score nine goals on Kuemper in just 55 shots. If Bednar starts him, we’ll be thrilled to ride the Over 6 at its current price. A Francouz start would slightly downgrade this play. Over his last seven games, Kuemper has recorded a save percentage below .901 six times, with the one game being the easiest shutout ever recorded in Game 2.

Tampa showing some life offensively at home has this a hard total not to hit the Over on. The books keep opening it lower but we aren’t seeing either of these teams playing to a 2-1 game on Wednesday. With how good the Colorado power play has been, Vasilevskiy will not be able to shut down this team, and with the goaltending situation in Colorado, the Under is a hard no.

Nathan MacKinnon is focused and was one of the few Colorado skaters at the optional skate Tuesday, while Kucherov will likely be hampered by the Game 3 cross-check. Cooper will likely use him more in more offensive situations only.

The Colorado offense is too good and its goaltending is sub-par this late in the postseason. Give us the fourth straight Over in the series.

With many prop markets unavailable thanks to the goalie situation in Colorado and the Kucherov injury, we’re looking at a market that has gone 3-0 so far in this series.

Through three games, we’ve seen 10 first-period goals, which equate to 48% of the series’ goals. Both teams found the scoresheet in the first frame of Games 1 and 3 and with the Avs needing to respond to Game 3’s shellacking, we’re expecting to see another eventful first stanza.

Both teams averaged at least 1.00 goals per first period in the regular season, which is impressive as only five other teams in the league did so. Colorado has scored a playoff-best 24 goals through 17 first periods, which is also the largest goals-per-1P mark. The Avs haven’t been tight in the first frame, though, and are allowing 0.77 first-period goals per game in the playoffs.

Kuemper could have a short leash if he does start, which could go either way in the production. The Avs know they have to score to beat Tampa with its play in net, and since Colorado has come out and scored within the first 10 minutes of each game, we like it to keep that early pressure going.

Although we like both teams to get some early chances, we’re avoiding the both teams to score market at +155 and just taking the 1P Over 1.5 (-125) which the books have started to adjust after a ton of early scoring in the series.

Did you know that if you parlayed today’s NHL Avalanche vs. Lightning picks, you could win $57.74 on a $10 bet? 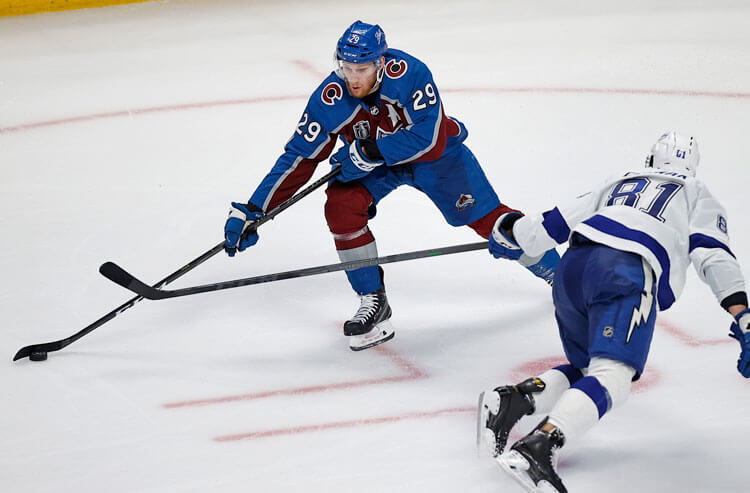 Avalanche vs Lightning Game 4 Picks and Predictions: Colorado Strikes Back
Provided by