Penguins vs Flyers Odds, Picks, and Predictions Tonight: No Liftoff for Flyers

The Penguins and Flyers are headed in very different directions as these neighboring rivals clash Friday night. Our NHL picks don't see much reversal of trends — find out why an easy win for the road side is in store.

The Pittsburgh Penguins and Philadelphia Flyers meet Friday night for the first of three regular-season tilts — the only one in the City of Brotherly Love.

Pittsburgh is looking for its fifth consecutive victory. The Penguins posted a 2-1 win in a shootout Wednesday against the visiting Calgary Flames, and the Pens have won three consecutive games on the road, too.

Philadelphia has been skidding hard, going 0-5-3 across the past eight outings, including a 3-2 setback in overtime on the road against the Washington Capitals on Wednesday with backup goaltender Felix Sandstrom in the crease.

Will the Flyers be able to pull out of their nosedive against the Keystone State rival Penguins, or will Pittsburgh remain red hot? We’ll discuss in our NHL picks and predictions for Penguins vs. Flyers on Friday, November 25.

Penguins vs Flyers picks and predictions

These are two teams going in completely different directions, as Pittsburgh has won four in a row, while losing in regulation just once across the past eight games overall.

Philadelphia, on the other hand, hasn’t won in eight games, earning just three of a possible 16 points during the span. Its last victory came Nov. 8 against the St. Louis Blues. The Flyers have been sinking like a stone in the Metropolitan Division after a red-hot start, now sitting tied for second-to-last with 19 points, just ahead of the cellar-dwelling Columbus Blue Jackets.

Superstar Sidney Crosby has been on fire for the Pens lately, going for three goals and 10 points with a plus-4 rating across the past four outings, and he has lit the lamp four times in the past five games. He and the diminutive Jake Guentzel lead the Pens with 10 goals apiece, with Sid the Kid all alone on top with 27 points.

On the flip side, big-ticket add Tony DeAngelo has cooled for the Fly Guys, and he is scoreless with a minus-5 rating in the past three games. Hit machine Ivan Provorov continues his physical play, but he has managed just one assist with a minus-7 rating across the previous seven outings.

The Penguins are a little expensive on the money line, so the preference here is to roll the dice on the puck line for a plus-money wager.

The Penguins have won four in a row, and five of their past six games on the road. In addition, Pittsburgh tends to take care of business against the dregs of the league, going 27-13 in the past 40 against teams with a losing record dating back to last season.

The Flyers were overachieving in the month of October, but they have really struggled in November. Philly hasn’t been special at home, going 1-4 in the past five games at Wells Fargo Center, while just 7-22 in the past 29 inside the Metropolitan Division dating back to last season.

Playing Pittsburgh here is a bit of a contrarian play, at least as far as the head-to-head trends are concerned. The Pens are 4-1 in the past five games overall, while the home team is 11-4 in the past 15 in this series. However, while the trends seem to point to the Flyers, they have been so ice-cold lately that they cannot be trusted.

The Penguins have posted 3.5 goals per game to rank No. 6 in the NHL, and the offense would be even better if the power play was clicking. The Pens have only hit at a 17.9% clip on the man advantage, which is just No. 26 in the NHL. Pittsburgh is middle of the road on the penalty kill at 80.3%, good for No. 13.

The Flyers scored three or more goals in five straight games to start the season, while hitting the mark in seven of the first eight contests. However, the offense has gone downhill quickly, scoring two or fewer goals in three of the previous 12.

Philadelphia was expected to be one of the worst teams in the NHL, but it exceeded expectations early on. Now, the offense has sunk to No. 31 in the NHL with 2.5 goals per game, while ranking No. 28 on the power play at 15.9%. Philly is also No. 25 on the kill at just 74.6%. The preseason prognostications appear to be spot on.

The Over has cashed in seven of the past 10 games this season, including 3-1 in the past four in Philly, too.

The Over has cashed in five of the past six meetings between these teams at Wells Fargo Center in Philadelphia. Find more NHL betting trends for Penguins vs Flyers. 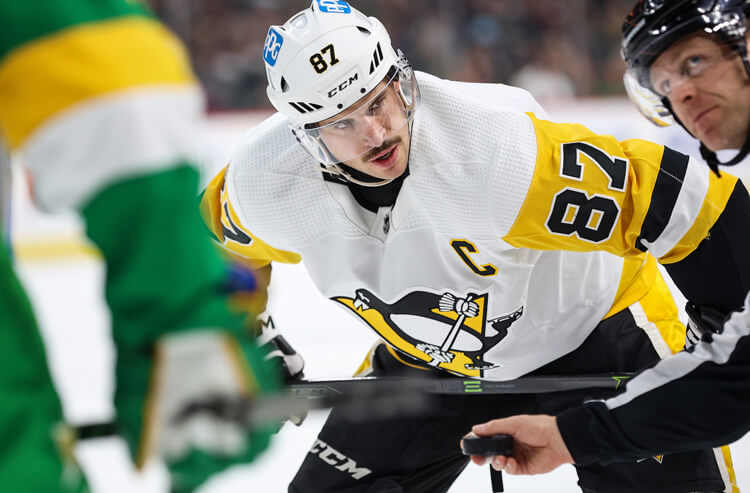 Penguins vs Flyers Odds, Picks, and Predictions Tonight: No Liftoff for Flyers
Provided by