No. 6 Oklahoma holds on when Cowboys miss 2-point try


Oklahoma's defense came up with a big stop on a two-point conversion try for the second consecutive week, as the No. 6 Sooners beat Oklahoma State 48-47 in Norman, Okla.

The Cowboys scored a touchdown with 1:03 remaining and Oklahoma State coach Mike Gundy elected to go for the lead. But Taylor Cornelius' pass was knocked to the ground by cornerback Tre Brown.

After Oklahoma State failed to recover the onside kick, the Sooners (9-1, 6-1 Big 12) clinched their fourth consecutive win over their in-state rivals in the series and kept their hopes for a College Football Playoff berth alive.

The Sooners took the lead with 3:29 remaining on Trey Sermon's 1-yard touchdown run before the Cowboys (5-5, 2-5) marched down the field to come within one point of tying it.

Kennedy Brooks ran for 165 yards and three touchdowns and Sermon finished with 124 yards and two scores as the Sooners won for the fourth consecutive week.

Oklahoma finished with 353 yards on the ground.

Oklahoma State needed just an extra point to take the lead with 12:20 remaining after Chuba Hubbard's third touchdown of the game.

But Cowboys kicker Matt Ammendola, who has struggled for much of the year, pushed the kick wide to keep the score tied.

Oklahoma quarterback Kyler Murray threw for 349 yards and a touchdown while Cornelius finished with 501 yards and three touchdowns.

Cornelius threw for 304 yards in the first half, as neither defense offered much resistance early.

Of the first seven drives combined, six ended in touchdowns and the other resulted in a field goal.

But then the game found a bit of normalcy as the defenses settled in.

Oklahoma State running back Justice Hill, who came in averaging nearly 100 yards per game, suffered a rib injury on the Cowboys' second series and didn't return.

The Sooners were also limited in the backfield, down to just two scholarship running backs with backup T.J. Pledger out with injury. Oklahoma had already lost starter Rodney Anderson and Marcelias Sutton to season-ending injuries. 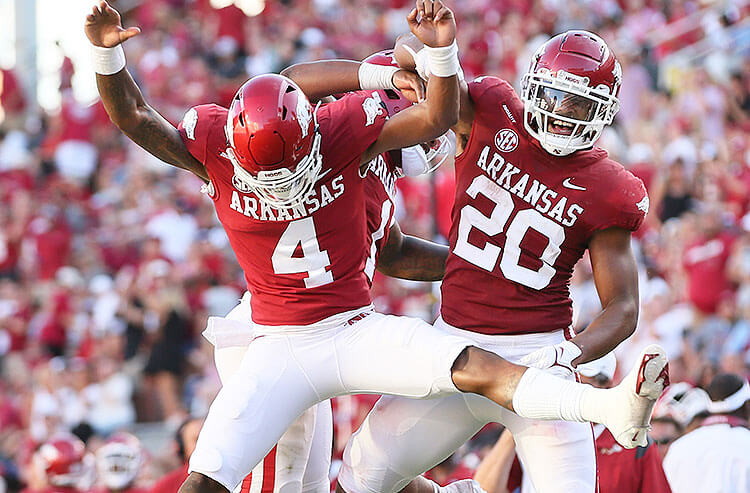 2022 College Football National Championship Odds: SEC Powers Sit Atop The Odds Board
About Us
Contact Us
Careers
Our Team
Brand
Testimonials