How to Hedge Super Bowl Futures

If you're holding a Super Bowl futures bet on the Chiefs or the Buccaneers, here's how you guarantee a profit by properly hedging Super Bowl LV.

The Kansas City Chiefs and Tampa Bay Buccaneers will meet in Tampa on February 7, and if you're lucky enough to hold a Super Bowl LV futures bet on either team, you have a rare chance to lock in a sports betting profit.

Depending on when and where you bet the Chiefs or Bucs to win the Big Game, the opportunity to hedge your Super Bowl futures bet is on the table. Will you take it or let it ride in Super Bowl LV?

Before you answer that question, let's recap the futures odds (open, movement, current) for both Kansas City and Tampa Bay. Their paths to Super Bowl LV – and their odds to win the Big Game – were very different.

Kansas City opened the 2020 schedule as the top contender to win Super Bowl LV, priced at 7/1 before even winning Super Bowl LIV over San Francisco last February. The Chiefs’ futures odds immediately slimmed to 9/2 following their Big Game win and Kansas City stayed there heading into the start of the season.

A four-game winning streak to start the schedule moved K.C. to 3/1 and the team bounced between 2/1 and 5/1 odds for most of the fall until a win over New Orleans in Week 15 moved the Chiefs to 8/5 (+160). Kansas City stayed below 2/1 odds until the AFC Championship Game, amid Patrick Mahomes health concerns, where it was set as a 2/1 favorite among the final four teams. Now, back in the Big Game, Kansas City is a -165 favorite to win Super Bowl LV.

Tampa Bay, on the other hand, was way down the betting board when the Super Bowl LV futures opened at 60/1 in late January 2020. However, when the Bucs brought on veteran quarterback Tom Brady, bookies cut their price down to 14/1 and money flooded in on "Tampa Tom" moving the Buccaneers down to 12/1 before the start of the season.

By mid-October, Tampa Bay was 10/1 to win Super Bowl LV following a statement victory over Green Bay but a rough stretch, which saw the Bucs lose three of four games in November (including a 27-24 loss at Kansas City), bumped the futures price back to 14/1.  Tampa Bay entered the playoffs at 12/1 and stayed there even after defeating Washington in the Wild Card Round. The Bucs cut those odds to 4/1 after beating New Orleans and now sit at +145 to win Super Bowl LV.

How to Hedge Your Bet

If you're holding a futures ticket on the Chiefs or Buccaneers, here's the proper way to hedge and guarantee yourself profit when the confetti flies at Super Bowl LV.

Hedging a bet is essentially an insurance plan. A $100 bettor with the ticket on Tampa Bay at 60/1 is looking at a possible $6,000 winning ticket. Of course, the ticket could also be worthless if the Chiefs end up winning the Super Bowl outright.

One way for the Buccaneers bettor to go would be to wager half of their potential winnings ($3,000 in this case) on Kansas City to win on the moneyline. The Chiefs are around -165 to win outright which means our bettor is looking at only a $1,818 profit in this scenario, but it’s much better than the alternative should Mahomes lead K.C. to victory again.

Some people will argue letting it ride is gambling in a truer sense. Go big or go home. A hedge bet is not for those types of people.

As for the $100 Kansas City bettor who took the Chiefs at the 7/1 opening odds, the hedge actually works out better due to the fact they can toss half of their possible winnings ($350) on the Bucs' moneyline at +145 (winning $435) or aim to just get their original wager back with a $69 bet on Tampa Bay to win outright.

If the Chiefs bettor is really ballsy, they could roll the dice and try to win on both sides with a bet on Tampa Bay +3.5 (-120), giving them a chance to win both bets should Kansas City squeak out a win by three or less in the Super Bowl. However, the team that wins the Super Bowl most often covers the spread as well.

How to bet on the Super Bowl

The mass appeal of the Super Bowl brings in new sports bettors every year, all wondering how to bet on the Big Game. Get started with our Super Bowl betting guide.

Where Can I Get the Best Super Bowl Odds? 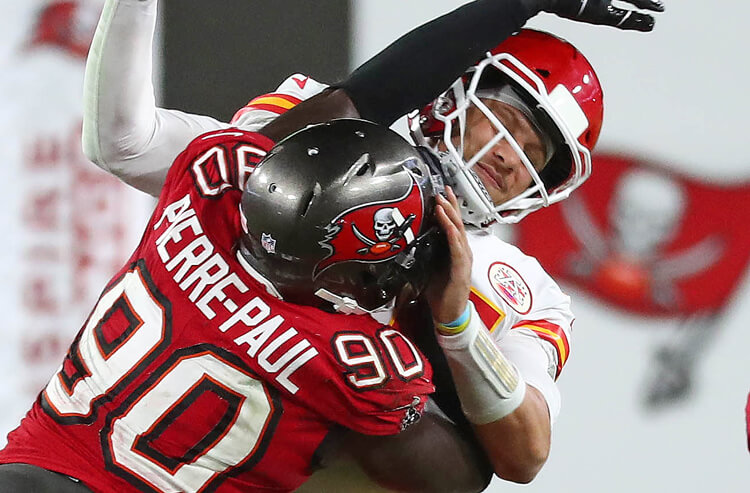 How to Hedge Super Bowl Futures
Provided by