Bengals vs Giants Preseason Picks and Predictions: Upset Alert in the Meadowlands

Cincinnati is 0-1 in the preseason and heads to New York shorthanded and as 6-point NFL betting underdogs. However, there's still a lot to like with the defending AFC champions, and our picks expect an upset vs. the Giants.

The Cincinnati Bengals travel to MetLife Stadium to take on the New York Giants in a Week 2 preseason contest on Sunday.

The Bengals are coming off a 36-23 loss to the Cardinals, while the Giants surprised the Patriots in Week 1, 23-21.

Can New York win its second preseason game, or will the Bengals get past the injuries and get their first preseason win?

Continue reading for free NFL picks for Bengals vs. Giants on August 21.

This odds widget represents the best odds available for each betting market from regulated sportsbooks.

Use the live odds widget above to track any future line movements right up until kickoff and be sure to check out the full NFL odds before placing your bets.

If you're signing up for a new sportsbook for the 2022 NFL season, here are two of the best bonuses* available:

A) Place a bet of $50 or more in the Super Bowl LVII outright market and get a free $5 bet for each game your team wins during the regular season at FanDuel! Claim Now

*Eligible USA locations only. Also, check out our full list of NFL promo codes for 2022.

The underdog is 5-0 against the spread in the last five meetings between the Bengals and Giants. Find more NFL betting trends for Bengals vs. Giants.

Bengals vs Giants picks and predictions

Our side and total predictions are based upon our analysis of the line and total in this game. Our best bet is our favorite pick across all markets.

A lot has been made of the injuries to the Bengals, with good reason. Three offensive starters, including quarterback Joe Burrow and wide receiver Tee Higgins, are out for Sunday’s game.

Burrow has already said he won’t play in any preseason games, instead opting to participate in practice and let his surgery for a ruptured appendix heal fully.

That means the trio of Brandon Allen, Jake Browning, and Drew Plitt will be behind center for Sunday’s game. All three performed decently last week: Browning was 13-of-24 passing for 190 yards, Plitt had the lone passing touchdown, finishing 6-of-6 for 76 yards, and Allen was also perfect, going three for three with 29 yards.

The Giants’ defense, especially the secondary, will have the task of slowing down the quarterbacks. Last week, the Patriots’ quarterbacks, minus starter Mac Jones, were able to throw for 264 yards and two touchdowns.

With the secondary young and inexperienced, expect mistakes, and I believe the Bengals will take advantage of that.

Giants starting quarterback Daniel Jones played sparingly in Week 1 but is expected to be on the field a bit more against the Bengals. Jones finished 6- of-10 for 69 yards. The bulk of the work will probably fall on backup Tyrod Taylor, who was 13-of-21 for 129 yards and a touchdown.

Both the Bengals and the Giants reached the Over last weekend, both scoring 23 points.

This game, however, should see the Under. The trends certainly point in that direction. The Bengals are 4-1 on the Under in their last five games overall and 20-7-2 in their last 29 road games.

The defenses will obviously be the key. The Bengals’ linebacker corps is pretty thin, while the Giants have two big concerns. The first is defensive end Leonard Williams, who did not play last week and is listed as questionable. The other is the secondary, where two backups, safety Dane Belton and cornerback Rodarius Williams, are both questionable.

The Bengals were 18th last year in total yards allowed, and fifth in rushing yards allowed. The Giants used eight different running backs last week, and they compiled 169 yards and a touchdown.

The Bengals should be able to limit the Giants on the ground. If they can do the same against Jones and Taylor, this game will hit the Under.

The Bengals had a fairly lackluster performance last week against the Cardinals. Zac Taylor said he won’t be playing a majority of his starters, but that shouldn’t be an immediate red flag for Bengals backers.

The Giants are dealing with several injury issues that could affect the outcome. The offensive line is dinged up, as is the secondary, so not being able to protect Jones as effectively as they would like will be an issue. Taylor is far more mobile, but if he tries to run, the Bengals’ run defense should be able to contain him.

The Bengals’ backup quarterbacks were solid against the Cardinals, and they should be just as productive against the Giants, who were 15th against the pass last year. The new scheme and infusion of new, young players will lead to continued growing pains. Against the Patriots, they gave up 264 yards and two touchdowns.

Look for a surprise performance from the Bengals’ offense and an outright victory against the Giants.

Pages related to this topic

Copy this into the source of your page where you want the article to appear: 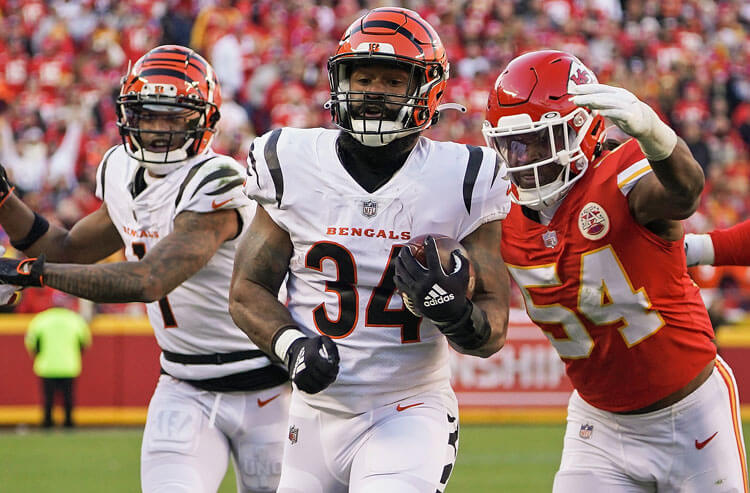 Bengals vs Giants Preseason Picks and Predictions: Upset Alert in the Meadowlands
Provided by

Established in 1995,
Covers is the world
leader in sports
betting information.

Covers is verified safe by:

If you choose to make use of any information on this website including online sports betting services from any websites that may be featured on this website, we strongly recommend that you carefully check your local laws before doing so. It is your sole responsibility to understand your local laws and observe them strictly. Covers does not provide any advice or guidance as to the legality of online sports betting or other online gambling activities within your jurisdiction and you are responsible for complying with laws that are applicable to you in your relevant locality. Covers disclaims all liability associated with your use of this website and use of any information contained on it. As a condition of using this website, you agree to hold the owner of this website harmless from any claims arising from your use of any services on any third party website that may be featured by Covers.