Brentford vs Arsenal Picks and Predictions: Gunners Aim for the Top

The Premier League resumes this weekend and so too does Arsenal's impressive start to the season. The Gunners will need three points to retain their place on Sunday, and our EPL picks highlight the soccer betting value here.

Both the host, Brentford, and visitor, Arsenal, will be happy with their Premier League campaigns so far. Arsenal entered the weekend sat at the top of the Premier League table, one point ahead of Tottenham and Man City, while Brentford are down in eighth.

This early kickoff on Sunday has all the hallmarks of an exciting clash and you wouldn’t want to miss out. Don’t miss our Brentford vs. Arsenal picks and predictions, with kickoff on September 18.

Brentford vs Arsenal picks and predictions

Brentford have been impressive this season and through six games, they’ve won two and only lost one. It’s not just the results, either, it’s been the manner of the performances, with the highlight being that 4-0 thrashing of Manchester United.

That same Manchester United beat Arsenal in their last game, although it’s perhaps fair to say that the defeat to Brentford snapped them awake. That game was Arsenal’s only defeat in the Premier League and their other five matches have all ended as victories. As impressive as the goals have been, it has been notable that Arsenal’s defense have really stepped up and helped them get over the line in some games

There are plenty of ways to bet this game but the one which really jumps out at me is backing Arsenal to be winning at halftime at +130. This Arsenal team and their exciting attack have started nearly every game strong, finding the back of the net in the first half of five of their seven games in all competitions.

The arrival of Gabriel Jesus has really turned this Arsenal attack into one of the league’s most dynamic. The energy and pace of the front four, most commonly Jesus with Gabriel Martinelli, Martin Odegaard, and Bukayo Saka, is a handful for any defense in the Premier League.

Everything suggests that Arsenal will again start strong and with their speed and guile they will cause problems for a Brentford backline who have shipped goals recently, letting Leeds, Crystal Palace, Everton, and Fulham score in their past four games.

For that reason, I’d recommend backing Arsenal to be leading at halftime in this one, a nice price at +130.

We know how both of these teams line up.

Thomas Frank’s Brentford will play in a 4-3-3 and rely on Vitaly Janelt and Mathias Jensen to play the ball to the forwards, of which Bryan Mbeumo and Yoane Wissa will hit the byline and look to get the ball toward Ivan Toney. The brilliant Toney earned a first call-up to the English national team this week and with five goals in six Premier League games he’s the threat to Arsenal.

Toney will struggle against Arsenal’s backline, with Gabriel and William Saliba having forged one of the best central defensive partnerships in the Premier League. They’ve got a rare combination of brains, strength, and speed, which have helped them hugely this season. They’ve been so good that Ben White, last year’s big CB signing has been moved to the right flank.

The attack of Jesus, Odegaard, Saka, and Martinelli are key to Arsenal’s hopes and they really should prove too good for Brentford. Arsenal look like good value to win at -120 and if you were really brave then you could back them -1 on the handicap, something I’ll likely be doing in addition to my best bet.

The sportsbook are expecting to see plenty of goals in this one, with Over 2.5 goals sitting at -150, and it’s very easy to see why.

There have been Over 2.5 goals in each of Arsenal’s past five games, with only their season opener, a 2-0 win over Crystal Palace not hitting the Over, and they were unlucky not to score four or five that day.

Brentford have seen Over 2.5 goals land in four of their six games this season, but games at the Gtech Community Stadium have generally been high scoring. Only 66.7% have been Over 2.5 goals but across those three games a total of 13 goals have been scored.

It’s hard to suggest backing anything as short as -150 but the trends do point towards Over 2.5 goals being the winning play here, perhaps it’s one to stick in a parlay to boost your odds a little.

It’ll be dry with temperatures at around 60 degrees when this kicks off at midday local time. 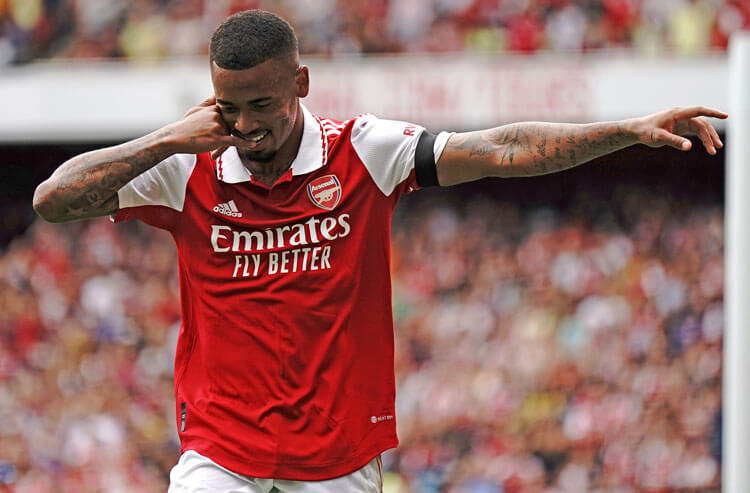 Brentford vs Arsenal Picks and Predictions: Gunners Aim for the Top
Provided by