It may be the final meeting between Aaron Rodgers and Tom Brady but don't expect a show, with both QBs lacking help. The depleted nature of both offenses weighs into our player prop picks for the Packers vs. Buccaneers.

In what will surely be the final regular-season meeting between Aaron Rodgers and Tom Brady, the two veteran passers take their patch-work pass catchers to Raymond James Stadium for a Week 3 game between the Green Bay Packers and Tampa Bay Buccaneers.

NFL oddsmakers are expecting a tightly contested game, with the Bucs 1.5-point favorites as of Friday. The similarities between these two offenses, and the limited nature in which they both must operate, make this a fascinating game on the NFL player props market.

We break it down for you with our Green Bay vs. Tampa Bay prop picks, and check out our Packers vs. Buccaneers picks for more.

Part of what drew Tom Brady to Tampa Bay as a free agent has remained a constant during his time there: A wealth of options among his pass-catcher corps. However, that group will look wildly different on Sunday. Mike Evans is suspended, Chris Godwin remains sidelined, Julio Jones has been a DNP all week in practice, and Russell Gage has been a limited participant.

With all due respect to Breshad Perriman, the best course of action for the Bucs, as a result of their depleted receiver corps, would be to revive Leonard Fournette's excellent role as a pass-catcher from 2021.

The former fourth overall pick was an absolute stud in the passing game last year, the latest in a long line of backs to benefit from Brady's love of involving tailbacks. Fournette averaged 6.0 targets, 4.9 catches, and 32.4 yards per game last year, capitalizing on a 14% target share and route participation of just under 53%.

While Fournette has had a quiet start as a receiver this year, with just six targets, four catches, and 19 yards, there's still plenty of reason for optimism. He's running routes on 63.9% of Brady dropbacks, an increase of over 10% from last season, and he's still drawn a 10% target share. After an offseason of concerns around an apparent weight gain, Fournette has looked dynamic with the ball early this year.

Despite Tampa's depleted receiver corps, Brady's proven trust in Fournette in the passing game, and the likelihood of the tailback having an out-sized role as a pass-catcher this week, his receiving yards total is just 25.5. That's a total he went Over in 10 of 14 games last year.

No room to work

A prevailing question over the offseason was around the Packers' attempt to replace the traded Davante Adams. While there were hopes placed on a pair of rookie wideouts, so far this season, Green Bay's reliance on its backfield appears to be the answer.

Aaron Jones and AJ Dillon continue to operate as an impressive 1-2, the NFC's answer to Kareem Hunt and Nick Chubb. Both have had bright moments amid a near-even split — Jones has 246 yards on 26 touches playing 59.7%, Dillon has 158 yards on 34 touches playing 54.3%  — but Sunday doesn't look to be Dillon's day.

Tampa has maintained a stout defensive front even amid some change. The Bucs limited Dallas to 71 yards on 18 carries, with the Cowboys finishing with -3.13 EPA/play on the ground. They followed it up by allowing 100 yards on 20 carries to New Orleans — but 25% of that production came on two carries and the Saints still finished with -2.11 EPA/play in the running game.

A strong front that maintains gap discipline extremely well is the wrong matchup for Dillon who, despite possessing great size and athleticism, isn't exactly one to create for himself. In what has largely been an inefficient season as a runner, Dillon's created just 1.8 yards after contact per carry. That is a rough mark, even more so for a 6-foot, 247-pound grinder.

This isn't the right matchup for Dillon to produce on the ground, and it's incredibly difficult to see it getting so lopsided that he's able to accumulate numbers through a greater volume.

We've already touched on it above but Brady's set to relive his 2019 Patriots experience on Sunday, going to battle with his best receivers being Perriman, an underwhelming and banged-up Gage, and "We have Julien Edelman at home" Scotty Miller.

Brady and the Bucs' weakened receiver corps will only further what has been a shift for the offense in its first year without Bruce Arians' bombs-away approach. After averaging 40.2 attempts per game over his first two seasons in Tampa, Brady's thrown just 61 passes in two games this year.

With his receiver group weaker than ever this week, there's no reason to expect Brady to top his season-high 34 attempts from last week.

Not with Evans, Godwin, and Jones sidelined, while Gage is carrying an injury.

Not while Fournette, and to a lesser extent Rachaad White, look so good on the ground.

And certainly not when Aaron Rodgers' experience on the other side won't be all that dissimilar, depending on rookies and castoffs.

This may be a close game but neither Brady nor Rodgers has the ammunition to turn it into a shootout. At +100, the Under on Brady's attempts is a great play. 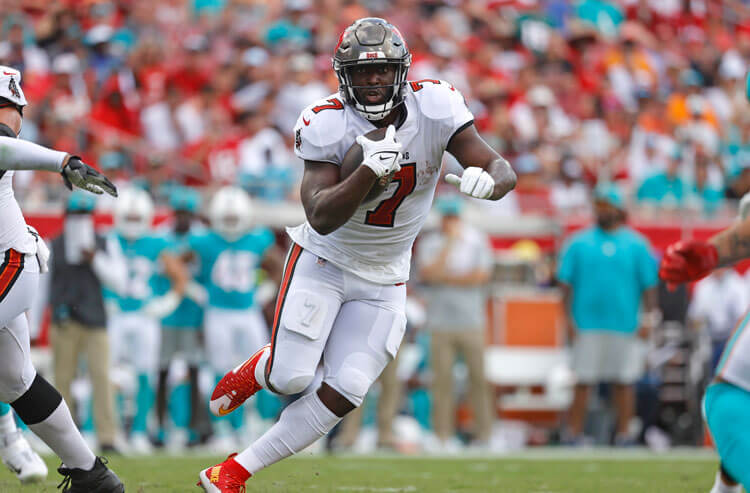