Rockets vs Warriors Picks: Curry to the Rescue

Things are getting out of hand for the Golden State Warriors.

Their season was cast into doubt the second Klay Thompson went down with a torn Achilles, but the results have been even more discouraging. The Dubs currently sit in the West's tenth seed and are perilously close to falling out of a play-in spot for the postseason.

They face the Houston Rockets tonight as they try to get things back on track. Find out how you can also take advantage of this NBA betting matchup with our Rockets vs. Warriors picks and predictions for Saturday, April 10.

Golden State landed on FanDuel's odds board as a 9-point favorite Friday night and crept as low as -7 by this evening, then ticked up to -7.5, where the line rests at 7:15 p.m. ET. It's two-way action with the very slightest lean toward the Warriors, who are taking 51 percent of tickets and 52 percent of money. The total opened at 228, dipped to 226.5, rebounded to 229 and is now back at the opener, with the Under attracting 54 percent of tickets/57 percent of money.

Warriors are 4-1 ATS in their last five games as a favorite. Find more NBA betting trends for Rockets vs. Warriors.

Knowing which Warriors squad will show up on a night-to-night basis has been a tricky task. A week ago, they suffered an absolutely humiliating 53-point loss to the Raptors (albeit without Steph Curry or Draymond Green), and rebounded to beat the Bucks four nights later. That type of oscillation has been indicative of their season overall.

Golden State is just 2-8 overall in its last ten games, and this is very much gut-check time for a team that planned to compete while re-tooling this season. Curry will be far and away the most talented and dangerous player on the court tonight, and this is the type of one-sided matchup he could win on his own.

Houston has crippled itself on numerous levels. Its return for James Harden currently leaves lots to be desired, stranding them to lean heavily on breakout big man Christian Wood and a somewhat-resurgent John Wall.

It hasn't been getting the job done. The Rockets own the league's second-worst SU record at 14-38, and its very worst ATS mark at 17-35. They've taken double-digit Ls in seven of their last fourteen games, including a 14-point loss to the Warriors on March 17.

Houston's simply playing out the strings on this season and will benefit themselves by keeping a losing pace and retaining the best chance at a Top-4 pick in the upcoming draft.

Currently, the Warriors arguably have one of the greatest onuses to start winning of any team in the NBA, and we're counting on that motivation to help them assert themselves as the clearly superior team.

This seems like a lofty total for two struggling teams to hit, but there's sneaky potential in an Over bet for a number of reasons.

First is pace. The Warriors are the NBA's second-fastest team, while the Rockets rank fifth, meaning that opportunities will be aplenty in this game, with neither side looking to slow things down.

Second is defense. The Warriors have slipped a bit recently, allowing 118.8 ppg over their past five games, a mark that would be dead last in the NBA over the full season. Houston is no phalanx either, with the 23rd-ranked scoring defense and 24th-rated D overall.

Third is the potential for Curry to go completely nuclear and force Houston to try and simply outscore him. Chef is averaging a scorching 35.6 points over his past five games, and probably knows at this point that his inconsistent supporting cast needs him to put the team on his back.

Count on defense falling by the wayside tonight and back the Over.

Their recent results are even more grim, trailing by an average of 6.83 points after the first frame of their past six games.

Given that Golden State's spotting less than half that many points and we're marking them to come out with a sense of urgency tonight, fire away on their first-quarter spread. 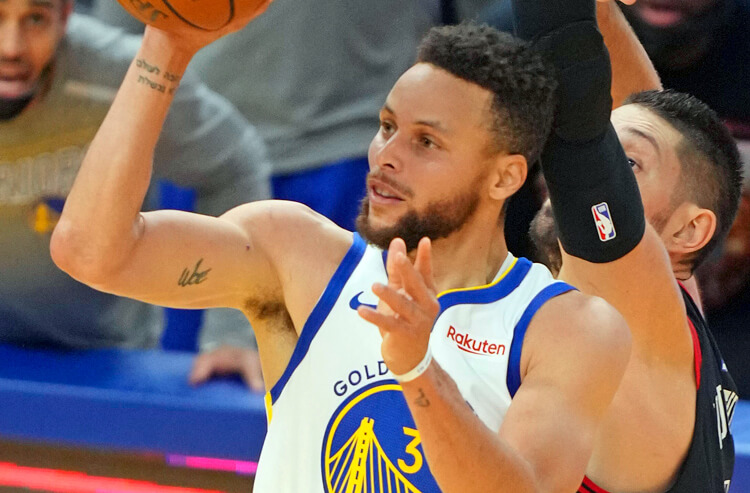 Rockets vs Warriors Picks: Curry to the Rescue
Provided by