Lakers vs Mavericks Picks: The Brow Grows Back In

Anthony Davis is expected to make his return to the Los Angeles Lakers lineup on Thursday as they take on the Dallas Mavericks in the first contest of a two-game set.

The Mavericks are in seventh place in the Western Conference but are just half a game behind sixth-place Portland and will be eager to jump ahead of the Blazers and avoid the play-in tournament.

NBA betting lines have the Mavericks installed as 3.5-point home favorites with the Over/Under at 216.

Here are our best free Lakers vs. Mavericks picks and predictions for Thursday, April 22, with tipoff at 9:30 p.m. ET.

Even with Los Angeles' Anthony Davis returning tonight, this line went from Dallas -2 to -4 in short order this morning at William Hill US. However, the number dialed down to -2.5 by lunch hour and is -3 as of 6:30 p.m. ET. The Mavericks are landing 58 percent of spread bets, while the Lakers are taking 57 percent of spread money. The total is down a point to 216, with 76 percent of bets on the Over, but 54 percent of dollars on the Under.

The Mavericks are 0-5 ATS in their last 5 home games. Find more NBA betting trends for Lakers vs. Mavericks.

The big news of course is that All-NBA forward Anthony Davis is expected to suit up after missing more than two months with a calf injury. Davis was cleared to resume on-court activities last weekend but the Lakers have been reluctant to rush him back, with coach Frank Vogel planning on restricting him to 15 minutes tonight.

Don't expect the Brow to have a big impact in this game, but he might not need to given the other factors at play. Although the Lakers are coming off a 111-97 loss to the Jazz on Monday, they upset the first-place Jazz just two days before and have been treading water without both Davis and LeBron James for the last month.

The Lakers have alternated wins and losses for the last 12 games and could be in an ideal spot to bounce back against a Mavs side that is 0-6 ATS in their last six contests.

Dallas is fresh off a 10-point win over the Pistons last night but playing on a back-to-back is never easy and the Mavs are just 3-7 ATS in their previous 10 games without rest.

Despite the outstanding play of superstar guard Luka Doncic, the Mavericks are a modest 15th in the NBA in shooting percentage and 19th in scoring with 111.5 ppg. It won't be easy to put up points against a Lakers squad that leads the league in defensive rating. Take L.A. with the points.

The Over/Under opened at 213.5 before moving up to 216 but there are lots of reasons to consider the Under.

The Lakers have been the league's best Under bet this season, going 22-36 O/U, including 9-19 O/U on the road. They are second in the league in scoring defense by holding opponents to just 106.1 ppg, with the number going down to 104.4 ppg on the road.

After having one of the league's top defenses a year ago, the Lakers' play on that end of the floor has been expected, but the Mavs' tough defensive play this year has been a big surprise.

The Mavs are eighth in the NBA in scoring defense, allowing 110.2 ppg and they play at the fifth-slowest pace in the league. The Mavs have gone 20-9 to the Under in their last 29 games overall, while cashing the Under in 11 of their previous 14 contests in Dallas.

Go against the line movement and back the Under.

With AD set to play limited minutes, the offensive load for the Lakers will likely fall to point guard Dennis Schroder. Schroder has scored at least 19 points in four of his last six games despite playing through a foot infection.

The only poor offensive performance from Schroder during that span came against the Celtics last week, but that was the first day with his foot injury and he was obviously affected by it throughout the contest.

With Schroder having scored 18 points on 7-for-11 shooting in the Lakers' only previous meeting with Dallas this season, expect him to be closer to 100 percent today and take the Over on his points total. 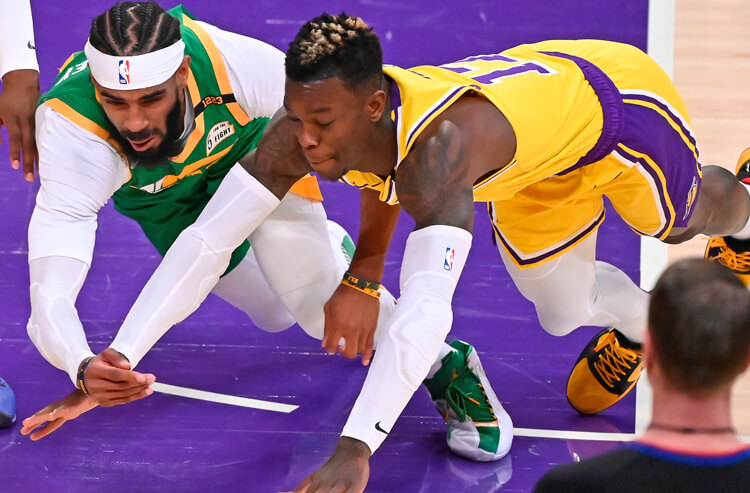 Lakers vs Mavericks Picks: The Brow Grows Back In
Provided by