Italian Grand Prix Picks and Predictions: At the Cathedral of Speed

Formula 1 is at Monza this weekend, at the quickest track on the calendar. With top speed absolutely crucial around the circuit, our Italian Grand Prix picks highlight two drivers primed for a strong weekend.

The latest triple-header of the season comes to a close this weekend at the Cathedral of Speed, with the Italian Grand Prix at the famous Monza track.

The triple-header out of summer break has only served as a coronation for Red Bull and Max Verstappen, with the Drivers' and Constructors' Championship odds favorites extending what was already a massive lead in their respective standings.

At what is the highest-speed purpose-built track on the calendar, is there a feasible way to back Verstappen in the F1 betting market? We break it all down in our Italian Grand Prix picks and predictions.

Eleven of the last 12 Monza races were won by a Top 3 starter. and 13 of the 15 races this season were won by a Top 4 starter. While Red Bull has won 10 of the last 12 races on the season, they’ve struggled in Italy on this particular race track which is why you’re getting the odds for Ferrari that you see. Not only have they not won at Monza since 2014, but they’ve also not had a podium in this time frame either.

That's why this is great to get plus money on the pole sitter (Charles Leclerc) at Ferrari’s home race. The others in the Top 4 are George Russell, Lando Norris, and Daniel Ricciardo.

Leclerc is due for a win and has a car setup on the low downforce track that could suit him well.

Every Italian Grand Prix has had at least two leads in each of the last six years. That’s why I don’t think anyone will go out and lead the whole thing. However, I also don’t see more than two leaders in any way since we will witness so many grid penalties. I do think Charles Leclerc can set sail early and if anyone else leads, it will be Max Verstappen.

So many big-named drivers are starting in the back and may not be able to lead a lap because of that. With this more than likely being a one-stop strategy race, I can see the lead changing hands just once as a result.

With the second-best power unit on the grid this season, Alpine is entering Monza with high expectations as it looks to secure fourth in the Constructors' Championship.

Between its car's strengths and the list of drivers taking grid penalties for Sunday, both Esteban Ocon and Fernando Alonso have a good chance at a Top-6 finish. However, the pair are not priced similarly, with Alonso -175 to finish in the Top 6 compared to +175 in the same market for Ocon.

Alonso is the superior driver and has had better results recently, but nearly a 30% difference in implied probability isn't an accurate reflection of the gap between the two.

In 2022, the pair's second season as teammates, it has been a completely even fight. Alonso has the edge in qualifying, 8-7, however, two of those sessions saw Ocon either not be able to participate at all or not set a time due to a red flag.

The race results for the pair are flipped, with Ocon holding an 8-7 edge over his former Drivers' Champion teammate (though Alonso has two DNFs to Ocon's one).

Very little separated these two last year in Monza, across qualifying, the sprint race, and Sunday's race. They qualified in 13th and 14th, with Alonso setting a faster time than Ocon by around 0.04 seconds. They would finish 11th (Alonso) and 13th (Ocon) in the sprint race, then move up to eighth and 10th during the race — with Alonso crossing the line 3.5 seconds before his teammate.

Those small margins continued this year in Friday's practice. Ocon edged Alonso in FP1, with the pair finishing sixth and seventh, separated by 0.024 seconds. They were just as close in FP2, with Ocon setting the eighth-fastest time and Alonso the ninth — with 0.024 seconds between them again.

Both drivers have a great shot at cracking the Top 6 on Sunday but their respective odds don't reflect how competitive the pair have been against one another.

I had hoped to get a bit better value on this pick after it opened at +150, but it looks like after Friday practice any element of surprise for Alex Albon in the Williams is gone. While Williams has a litany of issues, most notably the amateur driving its other car, the form of Albon and its straight-line speed is not among those issues.

Williams' ability to compete with the top teams in high-speed sectors and tracks has been apparent all season, most recently at Spa where it was, quite amazingly, the quickest overall in the first sector during qualifying.

Here's how the teams ranked through each sector during qualifying for the 2022 #BelgianGP! #F1 pic.twitter.com/VYiR2e5c7b

Albon would go on to qualify ninth and finish 10th in the race, both fantastic results for a team that had recorded only two points finishes up to that point. Now at the quickest purpose-built circuit in F1 another points finish is expected for Albon.

The weekend got off to a promising start Friday, with Albon going 11th quickest in FP1 and 10th quickest in FP2. Most promising of all, however, was Williams recording the second-quickest top speed during FP1 — at a track where drivers are on full throttle for 84% of the lap.

RedBull is by far the fastest car, while the Aston has one of the lowest top speeds (7km/h difference!)

This means the RedBull has around 6.4% less drag for the same amount of power!

But this will indeed be explained by the different wing levels… or not? pic.twitter.com/6BmQdmCovL

Albon's push for a points finish is getting a little external help, too, as six drivers are set to take grid penalties for Sunday's race. Lewis Hamilton, Carlos Sainz, and Yuki Tsunoda will start from the back, Valtteri Bottas will drop 15 places, Sergio Perez 10, and Max Verstappen five. At least four and as many as all six should be expected to out-qualify Albon Saturday, so to have them then start well behind will be a boost.

After a strong qualifying at Spa two weeks ago, Albon could easily move to shorter odds for a points finish here after tomorrow, so get behind the Williams driver to finish in the Top 10 now. 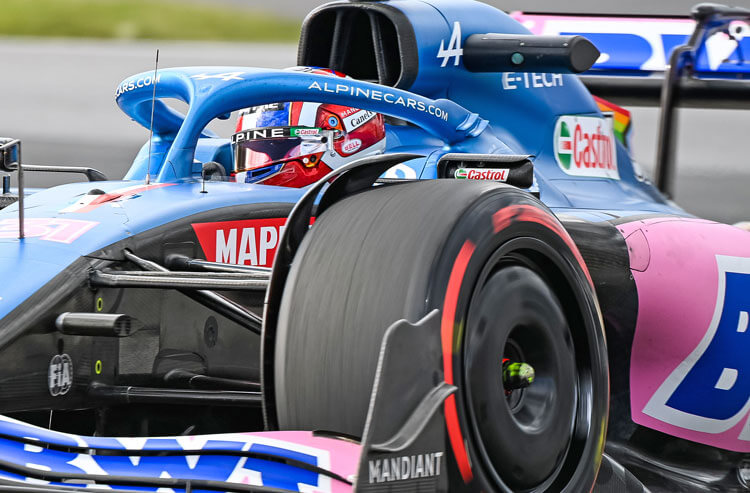 Italian Grand Prix Picks and Predictions: At the Cathedral of Speed
Provided by